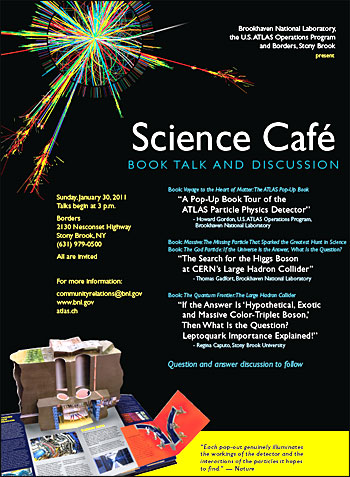 STONY BROOK, NY — During a free book talk and discussion, three physicists associated with the U.S. Department of Energy’s Brookhaven National Laboratory will take their audience, figuratively, to CERN, the European physics lab in Switzerland.

At 3 p.m. on Sunday, January 30, at Borders in Stony Brook, NY (2130 Nesconset Highway), the scientists will lead the audience through 17 miles of underground tunnels making up the world’s newest, largest, and highest-energy particle accelerator — the Large Hadron Collider (LHC) — and into a seven-story particle detector called ATLAS. Researchers from Brookhaven Lab, Stony Brook University, and institutions from 38 countries around the globe use ATLAS to explore the deepest secrets of the universe.

Producing particle collisions with three-and-a-half times more energy than has ever been achieved, the LHC will allow scientists to search for answers to fundamental questions about the origin of mass, the nature of dark matter, and the earliest moments of the universe. ATLAS is being used, in particular, to search for proof of a particle called the Higgs boson, which is thought to be responsible for the mass of all particles — and us. Scientists also will look for evidence of other conjectured but never-seen particles and phenomena.

The three speakers will focus on various aspects of this massive scientific undertaking:

A question-and-answer session will follow the talks. For more information about the event, please send an email to communityrelations@bnl.gov.