UPTON, NY — From the creation of 4-trillion-degree matter that existed just microseconds after the Big Bang to new nanocatalysts that can make fuel-cell cars more economical, the U.S. Department of Energy’s Brookhaven National Laboratory made a series of stunning discoveries in 2010.

“These high-impact studies are just a sampling of the wide-ranging research that happens at Brookhaven Lab on a daily basis," said Doon Gibbs, Brookhaven's Deputy Director for Science and Technology. "Brookhaven scientists are exploring the properties and uses of matter from the quark to the nano and cosmic scales, leading the way to alternative energy technologies, new treatments for disease, and a better understanding of the world around us.”

Out of more than 800 peer-reviewed papers published in 2010, here are our top picks:

At Brookhaven’s Relativistic Heavy Ion Collider (RHIC), physicists created a primordial state of matter known as quark-gluon plasma (QGP) at 4 trillion degrees Celsius — 250,000 times hotter than the center of the Sun. RHIC, a 2.4-mile-circumference particle smasher, creates conditions hot enough to melt protons and neutrons to form a liquid-like plasma of quarks and gluons — a substance that filled the universe just after its birth 13.7 billion years ago. 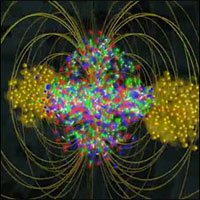 Within this hot quark soup, physicists found “bubbles” that seem to disobey so-called mirror symmetry, or parity. The observation that this symmetry appears to be broken in QGP at RHIC suggests that scientists may now have a way to test some crucial features of other symmetry-altering bubbles speculated to have played a role in establishing a preference for matter over antimatter in our world.

RHIC collisions have also created the most massive antinucleus to date. The exotic matter, known as an antihypertriton, contains an antiprotron, an antineutron, and an anti-Lambda particle — and it’s the first antinucleus found to contain a strange antiquark. The discovery may help elucidate models of neutron stars and opens up another way to explore fundamental asymmetries in the early universe.

Paving the way for warmer superconductors 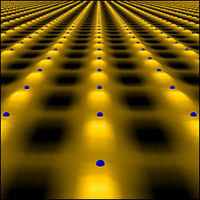 This pattern shows the tunneling potential of electrons on oxygen atoms “north” and “east” of each copper atom (shown embedded in the pattern) in the copper-oxide layer of a superconductor in the pseudogap phase.

Despite their name, “high-temperature” superconductors, which carry electric current with no energy loss, require pretty chilly conditions — all far below freezing, some near absolute zero (-273 degrees Celsius). To make them practical for everyday uses like more efficient power transmission, scientists are trying to understand how they operate, which could open the door to creating warmer, or ideally, room-temperature versions.

Two major advances in this field in 2010 were: the discovery of “electronic liquid crystal” states within the parent compound of one iron-based superconductor; and an expanded understanding of an alleged killer of room-temperature superconductivity — an electronic phase called the “pseudogap.” These findings may help identify common factors in the mechanism for high-temperature superconductivity, which could then be leveraged in designing new materials for real-world energy applications. 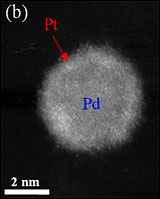 Platinum, a pricey addition to your jewelry collection, is also one of the most efficient metals used to drive reactions in automotive fuel cells in electric cars. In stop-and-go-driving, however, the precious platinum quickly dissolves. At Brookhaven, scientists developed a new electrocatalyst that minimizes platinum’s wear and tear while maintaining high levels of reactivity. The newly designed catalysts contain a palladium (or palladium-gold alloy) nanoparticle core, which “protects” a single layer of platinum surrounding the particles. This research may greatly enhance the practicality of fuel-cell vehicles and may also be applicable for improving the performance of other metallic catalysts. 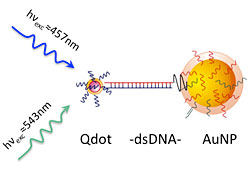 Photoluminescence enhancement is demonstrated at the single molecule level for two-particle systems composed of a quantum dot (Qdot) and gold nanoparticle (AuNP) linked by double stranded DNA (dsDNA) when optically excited with wavelengths within the surface plasmon resonance range of the gold nanoparticle.

Semiconductor quantum dots are tiny crystals of semiconductor materials. Some of these materials fluoresce, or glow, when excited and have enormous potential for use in a wide range of fields, from solar energy conversion to computing and medicine. By adding gold nanoparticles into the mix, Brookhaven scientists demonstrated the ability to boost the intensity of light emitted from quantum dots up to 20 times. At Brookhaven’s Center for Functional Nanomaterials, researchers used short strands of synthetic DNA as a highly specific “glue” to link the nanoparticles and quantum dots together. This precision technique will greatly advance scientists’ ability to study and modify the optical properties of quantum dots, and could eventually lead to improved solar energy conversion devices, light-controlled electronics, and biosensors. 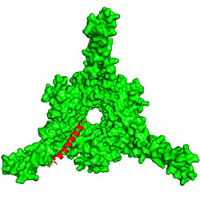 This computer-generated image shows a top view of how the “kiss of death” protein marker sequence (red) is recognized by and binds to one of three long tentacle-like structures of an enzyme (green) that sits at the entrance to the TB bacterium’s protein-degradation chamber, or proteasome.

Tuberculosis (TB) infects a third of the world’s population. Targeting the system that delivers unwanted proteins to the TB bacteria “recycling factory” could inhibit the bacteria and effectively treat TB. The catch is that human cells have a similar protein-recycling system, essential for their survival, which could also be destroyed by inhibitory drugs. At Brookhaven, researchers used the National Synchrotron Light Source to uncover a key difference between human and TB bacterial protein recycling centers. This information may help scientists design drugs to disable the bacterial system while leaving human cellular functions intact.

All of this research was completed with support from the U.S. Department of Energy Office of Science.