UPTON, NY — A brain imaging study at the U.S. Department of Energy’s (DOE) Brookhaven National Laboratory reveals a subtle difference between ordinary obese subjects and those who compulsively overeat, or binge: In binge eaters but not ordinary obese subjects, the mere sight or smell of favorite foods triggers a spike in dopamine — a brain chemical linked to reward and motivation. The findings — published online on February 24, 2011, in the journal Obesity — suggest that this dopamine spike may play a role in triggering compulsive overeating. 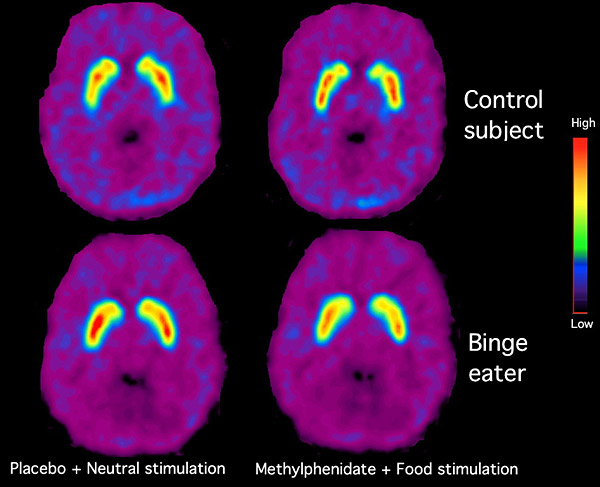 Brain scans comparing the effects of methylphenidate plus food stimulation to placebo plus neutral stimulation in obese binge eaters and obese control subjects who were not binge eaters. Since the radiotracer competes with the brain’s natural dopamine to bind to receptors, a weaker signal from the tracer (less red) indicates more dopamine in the brain. The decrease in red in the binge eaters exposed to food and methylphenidate (lower right) compared to the placebo/neutral stimulation condition (lower left) therefore indicates that food stimulation triggered a spike in dopamine levels in these subjects. There was no difference in dopamine levels between these conditions in the non-binge eaters (upper images).

“These results identify dopamine neurotransmission, which primes the brain to seek reward, as being of relevance to the neurobiology of binge eating disorder,” said study lead author Gene-Jack Wang, a physician at Brookhaven Lab and the Mount Sinai School of Medicine. Previous studies conducted by Wang’s team have identified a similar dopamine spike in drug-addicted individuals when they were shown images of people taking drugs, as well as other neurochemical similarities between drug addiction and obesity, including a role for dopamine in triggering desire for drugs and/or food.

“In earlier studies of normal-weight healthy people who had been food-deprived for 16 hours, we found that dopamine releases were significantly correlated with self-reports of hunger and desire for food. These results provided evidence of a conditioned-cue response to food,” Wang said.

The scientists studied 10 obese people with a clinical diagnosis of binge eating disorder, based on evaluations at St. Luke’s-Roosevelt Hospital, and 8 obese subjects who were not binge eaters.

The scientists used positron emission tomography (PET) to scan the subjects’ brains after injecting a radiotracer designed to bind to dopamine receptors in the brain. Because the tracer competes with the brain’s natural dopamine to bind to these receptors, the signal picked up by the PET scanner provides an inverse measure of the brain’s dopamine levels: a strong signal from the bound tracer indicates low levels of natural brain dopamine; a low signal from the tracer indicates high levels of dopamine in the brain.

Each subject was scanned four times on two different days to test the effects of food stimulation vs. neutral stimulation with and without pre-administration of a drug known to amplify dopamine signals. The drug, methylphenidate, blocks the reuptake of dopamine from brain synapses, allowing it to linger longer. In scans without methylphenidate, subjects were given a placebo drug.

In the food stimulation condition, research subjects’ favorite foods were heated (if appropriate) and waved in front of their mouths and noses so they could smell and even taste tiny amounts swabbed onto their tongues. For the neutral stimulation scans, researchers displayed non-food-related pictures and inanimate objects such as toys and clothing items in close proximity so research subjects could smell them while lying in the scanner. In all cases, research subjects had been fasting for 16 hours prior to scans.

Dopamine levels did not rise significantly in other brain regions or under any other condition (neutral stimulation with or without methylphenidate, or food stimulation without methylphenidate) in either group, and were not correlated with body mass index of the research subjects. Assessments of the levels of receptors for dopamine also did not differ between the two groups.

“So the key difference we found between binge eaters and non-binge eating obese subjects was a fairly subtle elevation of dopamine levels in the caudate in the binge eaters in response to food stimulation,” Wang said.

“This dopamine response is in a different part of the brain from what we’ve observed in studies of drug addiction, which found dopamine spikes in the brain’s reward center in response to drug-associated cues. The caudate, in contrast, is believed to be involved in reinforcement of action potentially leading to reward, but not in processing of the reward per se. That means this response effectively primes the brain to seek the reward, which is also observed in drug-addicted subjects,” Wang said.

Inasmuch as binge eating is not exclusively found in obese individuals, the scientists believe further studies are warranted to assess the neurobiological factors that may differentiate obese and non-obese binge eaters.

This study was funded by the National Institutes of Health through the Intramural Program of the National Institute on Alcoholism and Alcohol Abuse and the General Clinical Research Center of Stony Brook University, using infrastructure supported at Brookhaven Lab by DOE’s Office of Science.