UPTON, NY — The U.S. Department of Energy’s Brookhaven National Laboratory is now halfway toward completing construction of the National Synchrotron Light Source II (NSLS-II), a powerful x-ray microscope nearly half a mile in circumference. Construction started in 2009 on the $912-million facility.

Ready for research in 2015, NSLS-II will be one of the world’s most advanced light sources, providing sophisticated new tools for science that will enhance national and energy security and help drive abundant, safe and clean energy technologies. 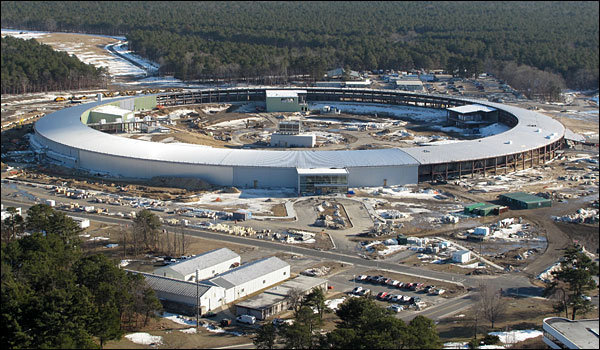 “The 50-percent mark is a major construction milestone,” said Steve Dierker, Associate Laboratory Director for Photon Sciences and NSLS-II Project Director. “It means that half of the planned work on the project is finished.” With this achievement coming in March 2011, the NSLS-II project is well ahead of schedule.

In 2009, the project received $150 million from the American Recovery and Reinvestment Act, money that came ahead of the baseline schedule and allowed construction to advance more quickly than originally planned.

During its construction and operation, NSLS-II is expected to create more than 1,250 construction jobs and 450 scientific, engineering and support jobs, plus additional jobs at U.S. material suppliers and service providers. Several dozen contractors, mostly based on Long Island, are currently working on the project. 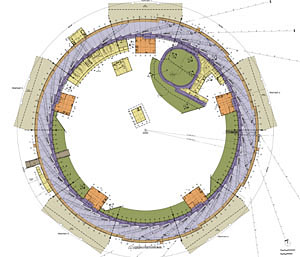 Conventional construction in the project is divided into two major segments. Torcon serves as the prime contractor for the ring building, which will house the electron accelerator and beamlines that are the heart of NSLS-II. Laboratory-office buildings, which E.W. Howell is constructing, will be attached around the exterior of the ring building.

Taking beneficial occupancy of a portion of the ring building is a second major milestone, according to Dierker. Up until now, all activity in the ring building has involved conventional construction, including site preparation; concrete work; structural steel; mechanical, electrical and plumbing systems; and the building enclosure — roof and walls.

“Beneficial occupancy enables us to begin installing the first of 826 high-precision magnets destined for the main accelerator ring,” said Dierker. The first, fully equipped magnet girder, 14 feet long and holding multiple magnets, will be placed in the ring building in March. This is a third significant milestone for the NSLS-II project. 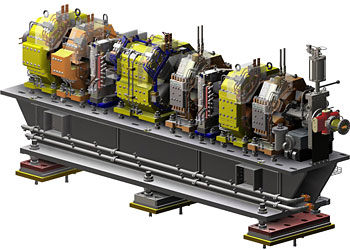 In brief, NSLS-II will work by shooting electrons through the center of each magnet, where powerful magnetic fields will contain and steer the particles in a nearly circular path. Light emitted by electrons traveling around the ring will be shunted to beamlines, a collection of scientific instruments used to do experiments.

NSLS-II will enable scientists to focus on some of the nation’s most important scientific challenges at the nanoscale level, including clean, affordable energy; molecular electronics; and high-temperature superconductors. NSLS-II will also be used to study the smallest crystals in structural biology.

Funded by the Department of Energy’s Office of Science, the NSLS-II construction project is scheduled to be completed by June 2015.