UPTON, NY — The U.S. Department of Energy’s (DOE) Brookhaven National Laboratory has announced the selection of the general contractor for construction of laboratory-office buildings (LOBs) for the National Synchrotron Light Source II (NSLS-II), which will be the world’s most advanced storage ring light source when complete in 2015. E.W. Howell, based in Plainview, NY, has been chosen to construct the LOBs, which will provide 124,000 square feet of lab and office space for NSLS-II. Occupancy of the first LOB is anticipated in 2012, with the balance of construction lasting through 2013. 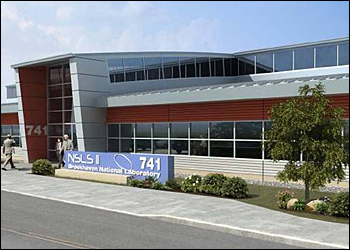 Funding for this new construction comes from the American Recovery and Reinvestment Act (ARRA). The NSLS-II project received $150 million in ARRA funding, $34 million of which is designated for the LOBs contract.

NSLS-II, now under construction, will enable discovery-class science, including science that will drive abundant, safe, and clean energy technologies. Ultimately, the facility will include five lab-office buildings. Under the contract announced today, E.W. Howell will construct three LOBs with various laboratories and offices.

Each LOB will feature a mix of wet labs, dry labs, fabrication/assembly shops, and tech spaces that have easy access to the NSLS-II experimental floor. Each building will have offices to accommodate up to 124 occupants. The buildings are being designed with a number of environmentally conscious features to reduce energy consumption and qualify for Leadership in Energy and Environmental Design (LEED) certification.

E.W. Howell also served as general contractor for two other major construction projects at Brookhaven Lab: The 65,000-square-foot Research Support Building, completed in 2006, and the 94,500-square-foot Center for Functional Nanomaterials, completed in 2007. Both buildings were awarded a LEED silver rating by the U.S. Green Building Council, which evaluates buildings for sustainability, water efficiency, energy and atmosphere, materials and resources, and indoor environmental qualities. Brookhaven Lab recently awarded E.W. Howell the construction contract for the Interdisciplinary Science Building, which will be built with the aim of achieving a LEED gold rating.

To take their research to the next level — to probe even smaller, subtler details of their samples — scientists need more intense, better-focused light. NSLS-II will deliver world-class intensity and brightness, producing x-rays 10,000 times brighter than the current NSLS.

The unique characteristics of NSLS-II will help scientists explore the grand challenges they face in developing new materials with advanced properties. It will pave the way to discoveries in physics, chemistry, and biology — advances that will ultimately enhance national security and help drive the development of abundant, safe, and clean energy technologies.

NSLS-II construction began in 2009, creating jobs and stimulating the economy. The facility is expected to start operating in 2015.

NSLS-II is funded by the Department of Energy Office of Science, which is also supporting construction of the lab-office buildings.