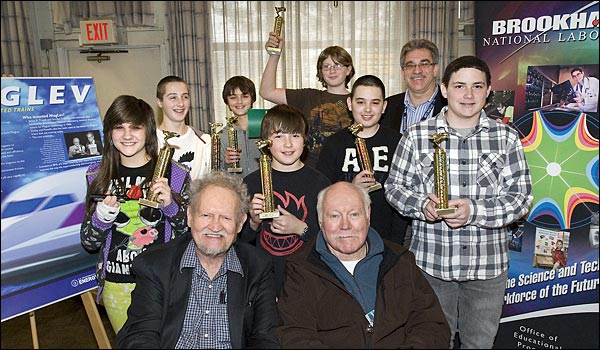 Gordon Danby and James Powell, retired Brookhaven Lab scientists who invented and patented maglev — the suspension, guidance, and propulsion of vehicles by magnetic forces — were honored guests at the contest. Powell gave a brief talk to the students, in which he predicted that, within the next 20 years, a maglev network would be in place in the U.S. that would allow passengers to travel anywhere in the nation at a speed of 300 miles per hour. He also predicted that one day maglev might be used to launch rockets into space.

About 200 students from 12 Long Island middle schools entered the contest, in which they were required to design and construct model maglev vehicles according to engineering specifications in their choice of seven categories: electrified track, wind power, gravity, self-propelled balloon, self-propelled other, futuristic, and scale-model design. Judging was based on speed, efficiency, appearance, and the students’ written design process.