The following news release is being distributed by the Georgia Institute of Technology about a new fuel cell anode catalyst that could lead to cleaner, cost-effective fuel cells powered by coal. Scientists from the U.S. Department of Energy’s Brookhaven National Laboratory used an advanced computing facility at the laboratory’s Center for Functional Nanomaterials to determine how the catalyst works. The authors of the paper also used Brookhaven’s National Synchrotron Light Source to characterize the catalytic reaction. For more information about Brookhaven’s role, contact Kendra Snyder at 631-344-8191, ksnyder@bnl.gov or Peter Genzer at 631-344-3174, genzer@bnl.gov. 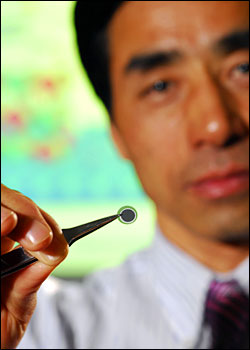 Using barium oxide nanoparticles, researchers have developed a self-cleaning technique that could allow solid oxide fuel cells to be powered directly by coal gas at operating temperatures as low as 750 degrees Celsius. The technique could provide a cleaner and more efficient alternative to conventional power plants for generating electricity from the nation’s vast coal reserves.

Solid oxide fuel cells can operate on a wide variety of fuels, and use hydrocarbons gases directly — without a separate reformer. The fuel cells rely on anodes made from nickel and a ceramic material known as yttria-stabilized zirconia. Until now, however, carbon-containing fuels such as coal gas or propane could quickly deactivate these Ni-YSZ anodes, clogging them with carbon deposits in a process known as “coking” — especially at lower operating temperatures.

To counter this problem, researchers have developed a technique for growing barium oxide nanostructures on the anodes. The structures adsorb moisture to initiate a water-based chemical reaction that oxidizes the carbon as it forms, keeping the nickel electrode surfaces clean even when carbon-containing fuels are used at low temperatures.

“This could ultimately be the cleanest, most efficient and cost-effective way of converting coal into electricity,” said Meilin Liu, a Regents professor in the School of Materials Science and Engineering at the Georgia Institute of Technology. “And by providing an exhaust stream of pure carbon dioxide, this technique could also facilitate carbon sequestration without the separation and purification steps now required for conventional coal-burning power plants.”

The water-mediated carbon removal technique was reported June 21 in the journal Nature Communications. The research was supported by the U.S. Department of Energy’s Office of Basic Energy Sciences, through the HeteroFoaM Center, an Energy Frontier Research Center. The work also involved researchers from Brookhaven National Laboratory, the New Jersey Institute of Technology and Oak Ridge National Laboratory.

Conventional coal-fired electric generating facilities capture just a third of the energy available in the fuel they burn. Fuel cells can convert significantly more of the energy, approximately 50 percent. If gas turbines and fuel cells could be combined into hybrid systems, researchers believe they could capture as much as 80 percent of the energy, reducing the amount of coal needed to produce a given amount of energy, potentially cutting carbon emissions.

But that would only be possible if the fuel cells could run for long periods of time on coal gas, which now deactivates the anodes after as little as 30 minutes of operation.

The carbon removal system developed by the Georgia Tech-led team uses a vapor deposition process to apply barium oxide nanoparticles to the nickel-YSZ electrode. The particles, which range in size from 10 to 100 nanometers, form “islands” on the nickel that do not block the flow of electrons across the electrode surface.

When water vapor introduced into the coal gas stream contacts the barium oxide, it is adsorbed and dissociates into protons and hydroxide (OH) ions. The hydroxide ions move to the nickel surface, where they combine with the carbon atoms being deposited there, forming the intermediate COH. The COH then dissociates into carbon monoxide and hydrogen, which are oxidized to power the fuel cell, ultimately producing carbon dioxide and water. About half of the carbon dioxide is then recirculated back to gasify the coal to coal gas to continue the process.

“We can continuously operate the fuel cell without the problem of carbon deposition,” said Liu, who is also co-director of Georgia Tech’s Center for Innovative Fuel Cell and Battery Technologies.

The researchers also evaluated the use of propane to power solid oxide fuel cells using the new anode system. Because oxidation of the hydrogen in the propane produces water, no additional water vapor had to be added, and the system operated successfully for a period of time similar to the coal gas system.

The researchers have so far tested their process for a hundred hours, and saw no evidence of carbon build-up. A major challenge ahead is to test the long-term durability of the system for fuel cells that are designed to operate for as long as five years. Researchers must also study the potential impact of possible fuel contaminants on the new electrode.

Forming the barium oxide structures can be done as part of conventional anode fabrication processes, and would not require additional steps. The anodes produced in the technique are compatible with standard solid oxide fuel cell systems that are already being developed for commercial electricity generation, home power generation and automotive applications.

“We have started with state-of-the-art technology, and simply modified the surface of the electrode,” said Mingfei Liu, a postdoctoral researcher in the Center. “Because our electrode would be built on existing technology, there is a lower barrier for implementing it in conventional fuel cell systems.”