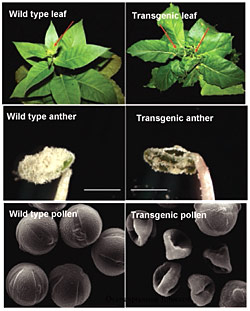 Compared with control plants (left) transgenic plants with overexpression of a gene for pectin acetylesterase had altered leaf shape as well as deformed anther sacs and pollen grains. These findings imply that pectin acetyl esters are essential for normal plant growth and reproduction.

UPTON, NY — In an ongoing effort to understand how modifying plant cell walls might affect the production of biomass and its breakdown for use in biofuels, scientists at the U.S. Department of Energy’s (DOE) Brookhaven National Laboratory have uncovered a delicate biochemical balance essential for sustainable plant growth and reproduction. Their research on pectin, a sugary component of plant cell walls commonly used as a gelling and stabilizing agent in foods, might also suggest new ways to improve its properties for industrial and food applications.

The research findings appear online in the journal The Plant Cell.

“Pectin is the most structurally complex polysaccharide (sugar) component of plant cell walls, and is mainly associated with cell walls that form in fast-growing tissues that are important for plant growth and development,” said Brookhaven biologist Chang-Jun (C.J.) Liu, lead author of the paper. “Our aim was to understand how small molecules, such as acetyl esters, that commonly bind to the sugar backbone affect pectin’s structure and its biological and biophysical properties.” The team included postdoctoral research associate Jin Ying Gou and former postdoctoral associate Xiao-Hong Yu in C. J. Liu’s group, and collaborators Lisa M. Miller of Brookhaven's National Synchrotron Light Source (NSLS), Guichuan Hou of Appalachian State University, and Xiao-Ya Chen of the Institute of Plant Physiology and Ecology, Shanghai.

By analyzing gene sequences available for poplar, a dedicated bioenergy crop and common experimental plant species, the team isolated and characterized a gene encoding what they thought might be an enzyme able to split acetyl esters from the pectin in cell walls. Biochemical experiments revealed that this enzyme, which they named pectin acetylesterase, was indeed able to specifically liberate the acetyl ester from cell wall pectins.

They then inserted the gene into tobacco, another experimental plant, to see what effects “disturbing” the acetyl esters would have on pectin in a growing plant, and examined the consequences for plant growth and biomass digestibility.

They used a laser scanning confocal microscope at Brookhaven’s Center for Functional Nanomaterials (CFN) to identify where the enzyme, fused with a green fluorescent protein, was being expressed within the plant cells. Studies using a form of infrared microspectroscopy aided by Miller at the NSLS allowed them to precisely monitor the changes in chemical composition of the plant cell walls.

The findings were dramatic: Removing acetyl esters from pectin drastically impaired the ability of cell walls to elongate with dire consequences for plant growth. 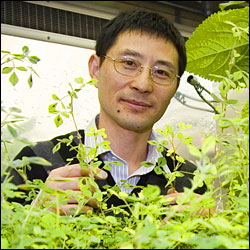 “The most dramatic case that we observed was that removing the acetyl esters retarded the germination of pollen grains and the growth of pollen tubes. Eventually, the plants were completely sterile, unable to produce seeds,” Liu said.

Equally dramatic — but unexpected — was the effect on biomass digestibility.

“Previously, many in vitro studies had demonstrated that acetylesters on the polysaccharide backbone of cell walls act as a physical barrier, preventing the breakdown of cell-wall polysaccharides,” Liu said. Consequently the scientists thought that removing those acetyl esters might be helpful for enzymatic digestion of cell-wall biomass, therefore facilitating the production of biofuels.

“In contrast, we found that reducing acetyl moieties from pectin actually impairs its digestibility, making it more difficult to break down with digestive enzymes,” Liu said. “This suggests that precise acetylation patterns in cell-wall polysaccharides — at least for pectin — are required for the action of the digestive enzymes in breaking down those cell-wall polymers.”

Understanding the details of this delicate biochemical balance will be essential as attempts are made to manipulate plants to maintain the sustainability of plant biomass and improve cell wall biomass digestibility for applications such as biofuel production.

Though not the direct focus of Liu’s research, the current findings might also offer insight into a more delectable aspect of “digestion” — the application of pectin as a food-processing agent. According to Liu, altering acetyl ester content in pectin can dramatically affect its properties, such as solubility and its ability to form gels (as in jellies and jams). “Therefore, characterization of this pectin-specific deacetylase provides a valuable molecular tool to manipulate pectin properties for improving applications in industry and food processing,” he said.

This research was funded by the DOE Office of Science and the National Science Foundation.