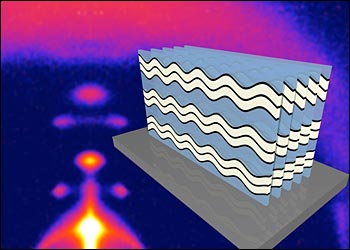 Structural details of photovoltaic material revealed: The bilayer polymer backbone motif (3D image) is derived from the x-ray scattering pattern (background) obtained at beamline X9 of NSLS. In the 3D image, the yellow region denotes the paired backbones and the blue region denotes the liquid-like side chains.

UPTON, NY — Detailed studies of one of the best-performing organic photovoltaic materials reveal an unusual bilayer lamellar structure that may help explain the material’s superior performance at converting sunlight to electricity and guide the synthesis of new materials with even better properties. The research, published in Nature Communications April 24, 2012, was conducted by scientists at the U.S. Department of Energy’s (DOE) Brookhaven National Laboratory, in collaboration with researchers from Stony Brook University, Seoul National University in Korea, the Max Planck Institute for Polymer Research in Germany, and Konarka Technologies.

The material, known by the handle PCDTBT, is an example of a “polycarbazole conjugated polymer,” a molecule composed of a chainlike carbon backbone with alkyl side chains. Its ability to move electrons around — both “donating” and “accepting” them — makes it among the best organic photovoltaic materials currently in use, able to convert sunlight to electricity with efficiency as high as 7.2 percent in organic solar cells.

“Despite the fact that this material has been extensively studied, no one has reported detailed structural features to provide a basis for its superior performance,” said Brookhaven physicist Benjamin Ocko, who led the current research. “Understanding why this material performs so well will help scientists harness its essential attributes to engineer new materials for a wide range of applications, including displays, solid-state lighting, transistors, and improved solar cells,” he said. 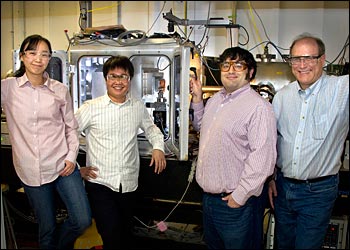 To probe the molecular structure, the team exposed thin films of PCDTBT to intense beams of x-rays at Brookhaven’s National Synchrotron Light Source (NSLS) using a high-resolution x-ray scattering technique. Unlike previous studies, which used less-intense x-rays, these studies revealed the formation of a crystalline-like phase at elevated temperatures. Furthermore, the patterns produced by the diffracted x-rays indicate that the structure is comprised of layers of conjugated backbone pairs, a pattern quite different from the single backbone constructions observed in all other organic photovoltaic materials studied to date.

Xinhui Lu, the paper’s lead author, noted that by analyzing the scattering patterns, they discovered undulations along the polymer’s backbone, and how the undulations in neighboring backbones are shifted with respect to each other. By carrying out molecular modeling simulations, the authors were able to predict which polymer backbone configuration would be most stable.

In a conjugated polymer, the backbone provides the path for electrical conductivity and the alkyl side chains, similar to simple oils, provide the solubility required for processing. Though necessary, these side chains interfere with the polymer’s electrical performance. PCDTBT is novel, the scientists say, since it is predominately composed of the backbone with little alkyl material. “Similar to oil and water, the polymer’s conjugated backbone pairs ‘phase separate’ from their alkyl side chains and this gives rise to the bilayer structure,” said David Germack, one of the paper’s coauthors. It is this structural motif that likely contributes to the material’s excellent electrical properties, and this understanding could guide the design of new organic solar materials.

“While we have significant in-house expertise in synthetic chemistry and organic solar device fabrication, we lack the in-depth structural characterization tools available at Brookhaven Lab,” said Jeff Peet, a senior scientist at Konarka Technologies, a world leader in the development and commercialization of organic solar cells. “These kinds of tools and collaborative studies with research partners at Brookhaven can elucidate very subtle differences between materials, giving us critical insights into how we should design our next generation of solar cell materials.”

Additional collaborators on this research are: Htay Hlaing of Broookhaven Lab and Stony Brook University, Won Ho Jo of Seoul National University, and Denis Andrienko and Kurt Kremer of the Max Planck Institute for Polymer Research.