Celebration of construction milestones for new facility that will allow unprecedented research in energy, materials, medicine 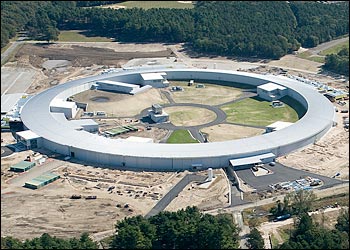 An aerial view of the NSLS-II construction site

Upton, NY – Construction of the $912-million National Synchrotron Light Source II (NSLS-II) at the U.S. Department of Energy’s Brookhaven National Laboratory is more than 70 percent complete – on schedule and on budget. When operational in 2015, NSLS-II will enable unprecedented studies aimed at designing new materials for efficient energy generation and storage, building better catalysts, and engineering new kinds of electronics and medicines.

“This is an exciting time for the project,” said Steve Dierker, NSLS-II Project Director and Associate Laboratory Director for Photon Sciences. “With the ring building complete, we are moving quickly to install the accelerator and start bringing in components for the experimental stations.”

Torcon, Inc., the general contractor for the ring building, began work in April 2009 under a $170-million contract, the single largest contract in the NSLS-II construction project. Torcon spent about 90 percent of its contract to hire subcontractors and suppliers on Long Island and in the region, bringing direct economic benefit to Long Island and New York State. Over the course of construction and operation, NSLS-II is expected to create more than 1,250 construction jobs, most from local labor unions, as well as 450 scientific, engineering and support jobs.

Construction of the ring building was done in five sections, the first completed in March 2011 and the final section in February 2012, when Brookhaven Lab took official occupancy of the building. The Laboratory has started installing equipment and components for the facility’s accelerator and experimental stations.

The NSLS-II accelerator will consist of three sections: a linear accelerator, or linac, where electrons are generated and accelerated to 200 million electron volts; a booster, which takes electrons from the linac and speeds them up to 3 billion electron volts; and a storage ring, where the electrons circulate to create synchrotron light in the form of x-rays. These x-rays are directed to experimental stations around the ring, where they will be used to probe the structure and function of everything from solar cells to cellular proteins.

Installation of the linac was completed in February and commissioning started at the end of March. During commissioning, workers will bring the linac to its designed operational parameters in a safe way.

On April 26, Brookhaven Lab suspended construction activities in the building for a “Celebration of Jobs Well Done” event. The Laboratory community took a first-time opportunity to walk all the way around the half-mile ring, following the clockwise path electrons will eventually take around the accelerator tunnel.

Groundbreaking for NSLS-II was in 2009. That same year, in large part because it was “shovel-ready,” the NSLS-II project received $150 million from the American Recovery and Reinvestment Act. That early infusion of dollars — not affecting the total project cost — enabled the Brookhaven National Laboratory to accelerate conventional construction.

NSLS-II will provide sophisticated new tools that will allow scientists to see materials at the scale of a nanometer, or one billionth of a meter — a capability not available at any other light source in the world. Working at the nanoscale, researchers will focus on some of the nation’s most important scientific challenges, including developing novel materials for clean and affordable energy production, molecular electronics, and high-temperature superconductors.

For more details about capabilities and future research projects at NSLS-II, go here.

The U.S. Department of Energy’s Office of Science is funding the NSLS-II project. The Office of Science is the single largest supporter of basic research in the physical sciences in the United States, and is working to address some of the most pressing challenges of our time. For more information, please visit science.energy.gov