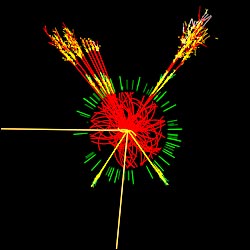 Simulated production of a Higgs boson in the ATLAS detector. 2008, Courtesy of CERN.

EVENT: Scientists searching for signatures of a subatomic particle thought to impart mass to other particles will present their latest results to eager audiences around the world this Wednesday. The data from the Large Hadron Collider (LHC) — a particle accelerator located at the European Organization for Nuclear Research (CERN), where large international collaborations, including many physicists from the U.S. Department of Energy’s Brookhaven National Laboratory, are running the experiments — will give the most definitive evidence yet of whether the Higgs boson, sometimes dubbed the “God particle,” exists.

WHERE: The results from the LHC’s ATLAS and CMS experiments will be presented simultaneously during seminars at CERN and at the International Conference on High Energy Physics in Melbourne, Australia, with a live streaming webcast at http://webcast.web.cern.ch/webcast/.

BACKGROUND: The Higgs boson is a still-hypothetical particle postulated in the mid-1960s to complete what is considered the Standard Model (SM) of particle interactions. Its role within the SM is to provide other particles with mass, without which much of the matter comprising our weighty world couldn't exist. Specifically, the mass of elementary particles is the result of their interaction with the Higgs field. The Higgs boson’s properties are defined in the SM, apart from its mass, which can only be determined through experiment.

Last December, physicists from the ATLAS and CMS experiments announced results that dramatically narrowed the space in which the Higgs boson could dwell, noting modest excesses in their data that could uncover the famous missing piece of the physics puzzle. The new results are expected to provide the most definitive evidence to date in this decades-long search.

Scientists from Brookhaven Lab have played and continue to play a key role in the design, construction, and operation of the ATLAS detectors used in the Higgs search (the liquid argon electromagnetic calorimeter and the muon spectrometer). Major contributions are also made in data analysis and “triggering” — deciding which events to analyze in detail. Brookhaven’s computing facility serves as the sole Tier 1 center for storing, processing, and distributing ATLAS data to U.S.-based ATLAS collaborators at universities and laboratories throughout the nation.

For more general background about Brookhaven’s work on the LHC and ATLAS, see: http://www.bnl.gov/atlas/.

The following Brookhaven Lab scientists will be available for interviews and comments immediately following the live presentations:

Brookhaven’s role in experiments at the LHC is funded by the DOE Office of Science. DOE’s Office of Science is the single largest supporter of basic research in the physical sciences in the United States, and is working to address some of the most pressing challenges of our time. For more information, please visit http://science.energy.gov.