Unraveling Intricate Interactions, One Molecule at a Time 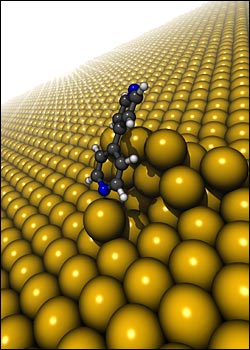 A team of researchers at Columbia Engineering, led by Applied Physics and Applied Mathematics Associate Professor Latha Venkataraman and in collaboration with Mark Hybertsen from the Center for Functional Nanomaterials at the U.S. Department of Energy’s Brookhaven National Laboratory, has succeeded in performing the first quantitative characterization of van der Waals interactions at metal/organic interfaces at the single-molecule level.

In a study published online August 12 in the Advance Online Publication on Nature Materials’s website, the team has shown the existence of two distinct binding regimes in gold-molecule-gold single-molecule junctions, using molecules containing nitrogen atoms at their extremities that are attracted to gold surfaces. While one binding mechanism is characterized by chemical interactions between the specific nitrogen and gold atoms, the other is dominated by van der Waals interactions between the molecule and the gold surface.

“A detailed understanding of van der Waals interactions is a key step towards design of organic electronic devices,” says Sriharsha Aradhya, the study’s lead author and a Ph.D. candidate working with Venkataraman. “Apart from the fundamental importance of these measurements, we are also excited about its applications. Understanding the effects of van der Waals interactions is tremendously important for creating and optimizing devices with organic building-blocks”.

“Many proposals for future photovoltaic and flexible electronic devices are based on organic molecules because they are cost-effective,” Venkataraman adds, “and scientists need to have a deeper understanding of these van der Waals interactions. Our work opens up the possibility of measuring and characterizing the strength of interaction between a variety of molecules and metallic surfaces a single-molecule at a time.”

The forces of attraction between atoms and molecules come in different varieties and strengths, Aradhya explains. One of the most ubiquitous forms of attraction in nature is the van der Waals force. In contrast to specific interactions arising from bonding between atoms, van der Waals interactions represent non-specific interactions with subtler underpinnings. While originally intended to explain the apparent continuity between gaseous and liquid phases of matter, these forces have come to be recognized as an important aspect in answering such diverse questions as how does water boil inside a pressure cooker? How are geckos able to climb walls vertically? Or how can you control the organization of molecules for an organic LED smartphone display screen?

As devices like the latter become increasingly common, there has been a good deal of renewed interest in van der Waals interactions, known to lie at the heart of the structure and functionality in such devices. These interactions between organic molecules and metallic surfaces are central to a diverse range of phenomena such as catalysis of reactions, molecular electronic architectures, and molecular self-assembly in nature and engineered material. However, van der Waals interactions remain challenging to characterize directly at the fundamental, single-molecule level both in experiments and in theoretical calculations.

For this Columbia Engineering study, the researchers used their custom-built conducting atomic force microscope to make simultaneous measurements of force and conductance in single-molecule junctions. They combined their measurements with theoretical calculations and simulations, carried out in collaboration with Hybertsen at Brookhaven, in order to provide a unique quantitative measurement of the relative importance of specific and non-specific interactions at the single-molecule level, in a regime where both are comparable.

“In simple terms, conductance of the junction acts as a fingerprint of the structure,” explains Aradhya. “At the same time, the measured force – especially the force needed to rupture the junction – can be used to deduce its mechanical properties.”

While similar studies have been reported by a few research groups around the world, such precise studies have typically required the measurements to be carried out at very low temperatures and in high vacuum. Venkataraman’s and Aradhya’s experimental setup was optimized for very high sensitivities even at room temperature and ambient conditions. This allowed the team to perform thousands of individual single-molecule measurements, resulting in statistically robust results. The researchers then performed extensive density functional theory calculations to help them understand the mechanisms underlying their measurements.

“Taken together, this unique combination of our state-of-the-art experimental and theoretical efforts has resulted in this major progress in quantifying van der Waals interactions,” Venkataraman says.

Future research, she adds, will include trying to control the interplay of van der Waals non-specific interactions with chemical modifications, in order to “achieve interesting functionality at the single-molecule level, which is an active area of research in our lab.”

“We’re very excited about this,” she says, “as our efforts towards developing a reliable way to simultaneously measure force and conductance are yielding exciting new opportunities to relate structure, mechanics, and electronics at the single-molecule level.”

This research was funded primarily by NSF (Career Award CHE-07-44185) and the Packard Foundation. The computational efforts at the Center for Functional Nanomaterials at Brookhaven National Laboratory were supported by the U.S. Department of Energy’s Office of Science.

Columbia University's Fu Foundation School of Engineering and Applied Science, founded in 1864, offers programs in nine departments to both undergraduate and graduate students. With facilities specifically designed and equipped to meet the laboratory and research needs of faculty and students, Columbia Engineering is home to NSF-NIH funded centers in genomic science, molecular nanostructures, materials science, and energy, as well as one of the world’s leading programs in financial engineering. These interdisciplinary centers are leading the way in their respective fields while individual groups of engineers and scientists collaborate to solve some of modern society’s more difficult challenges.

The Center for Functional Nanomaterials at Brookhaven National Laboratory is one of five DOE funded Nanoscience Research Centers Brookhaven National Laboratory is one of ten national laboratories overseen and primarily funded by the Office of Science of the U.S. Department of Energy (DOE), Brookhaven National Laboratory conducts research in the physical, biomedical, and environmental sciences, as well as in energy technologies and national security. Brookhaven Lab also builds and operates major scientific facilities available to university, industry and government researchers. Brookhaven is operated and managed for DOE's Office of Science by Brookhaven Science Associates, a limited-liability company founded by the Research Foundation for the State University of New York on behalf of Stony Brook University, the largest academic user of Laboratory facilities, and Battelle, a nonprofit, applied science and technology organization.