The following press release was issued by Stony Brook University, who led the collaboration highlighted below. The U.S. Department of Energy’s Brookhaven National Laboratory played a prominent role in this energy research.

The collaboration between Stony Brook and Brookhaven Lab will continue to advance this nanoparticle research through a 2012 Seed Grant. 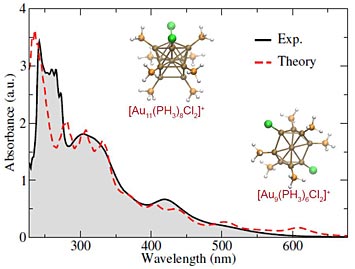 This diagram shows the good agreement between the optical spectra of mixed gold nanoclusters obtained through computation (dashed red line) and the experimental results measured with ultraviolet-visible spectroscopy (black line).

STONY BROOK, NY, November 20, 2012 – In the first-ever experiment of its kind, researchers have demonstrated that clean energy hydrogen can be produced from water splitting by using very small metal particles that are exposed to sunlight. In the article, “Outstanding activity of sub-nm Au clusters for photocatalytic hydrogen production,” published in the journal Applied Catalysis B: Environmental, Alexander Orlov, PhD, an Assistant Professor of Materials Science & Engineering at Stony Brook University, and his colleagues from Stony Brook and Brookhaven National Laboratory, found that the use of gold particles smaller than one nanometer resulted in greater hydrogen production than other co-catalysts tested.

“This is the first ever demonstration of the remarkable potential of very small metal nanoparticles [containing fewer than a dozen atoms] for making fuel from water,” said Professor Orlov. Using nanotechnology, Professor Orlov’s group found that when the size of metal particles are reduced to dimensions below one nanometer, there is a tremendous increase in the ability of these particles to facilitate hydrogen production from water using solar light. They observed a “greater than 35 times increase” in hydrogen evolution as compared to ordinary materials. 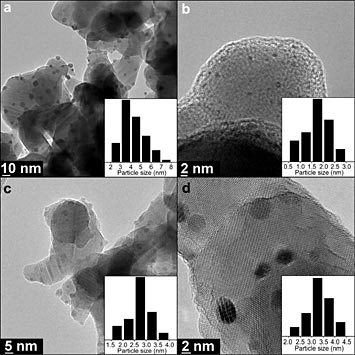 In order to explain these fascinating results, Professor Orlov collaborated with Brookhaven National Lab computational scientist Dr. Yan Li, who found some interesting anomalies in electronic properties of these small particles. Professor Orlov noted that there is still a tremendous amount of work that needs be done to understand this phenomenon. “It is conceivable that we are only at the beginning of an extraordinary journey to utilize such small particles [of less than a dozen atoms in size] for clean energy production,” he said.

“In order to reduce our dependence on fossil fuels it is vital to explore various sustainable energy options,” Professor Orlov said. “One possible strategy is to develop a hydrogen-based energy economy, which can potentially offer numerous environmental and energy efficiency benefits. Hydrogen can conceivably be a promising energy source in the future as it is a very clean fuel, which produces water as a final combustion product. The current challenge is to find new materials, which can help to produce hydrogen from sustainable sources, such as water.”

Professor Orlov also serves as a faculty member of the Consortium for Inter-Disciplinary Environmental Research at Stony Brook University. Members of his research team include Peichuan Shen and Shen Zhao from the Department of Materials Science and Engineering at Stony Brook and Dr. Dong Su of the Center for Functional Nanomaterials at Brookhaven National Laboratory.