The artists’ winning works — “A Different View of Paris” by Gardner, and “The Fence” by Lucchese — were displayed at the opening reception of the BNL Art and Craft Show held November 19-21. The talented artists and their families were invited to the event, and Brookhaven Lab Director Sam Aronson congratulated both winners as he presented them with a certificate to accompany each $300 prize. 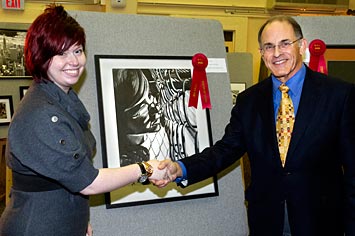 Brookhaven Lab awards the Discovery Art Prize annually to one or more local high school seniors for artwork that best exhibits the spirit of scientific discovery. Representatives from the BNL Art Society and Camera Club choose the winners from the artworks exhibited at a show for high school seniors held each November by the South Bay Art Association (SBAA) in Bellport.

As Aronson explained at the Brookhaven reception, the two pictures were selected not only for their very high standard of artistic excellence, but for symbolizing the theme of scientific discovery. 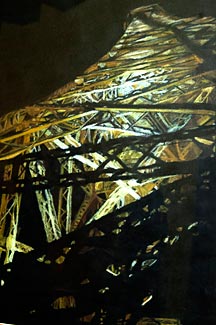 Kaylyn Gardner, whose teacher at Bayport-Bluepoint High School is Frank Salino, is planning to major in art. Schools of particular interest to her include the Fashion Institute of Technology, Parsons New School for Design, and Savannah College of Art and Design.

In “A Different View of Paris,” Gardner created a brilliantly colored drawing of light and shadow playing on the Eiffel Tower. This landmark is seen from an unusual angle that emphasizes its elegant outline and its powerful metal structure. By her exceptional artistic skill, combining a well-studied architectural drawing with an impressionistic use of subtle color, light, and dark, she conjures up the romantic, exciting atmosphere of the tower while focusing on the solid engineering on which it depends.

Scientific experiments, including those at Brookhaven’s accelerators the Relative Heavy Ion Collider (RHIC) and the National Synchrotron Light Source, also often depend on engineering for the equipment that make discoveries possible. Gardner’s picture can remind scientists of what it takes to build special devices and instruments for their research. Basic scientific research can result in new technologies not envisioned when the original experiments were designed. The Eiffel Tower, built as an archway to the 1889 World’s Fair, has been used from the 20th century to transmit radio and television broadcasts — technologies hardly dreamed of at the time it was erected. Similarly, scientists at Brookhaven who worked to advance discoveries at RHIC are applying their new knowledge of accelerators to develop new cancer treatment facilities. 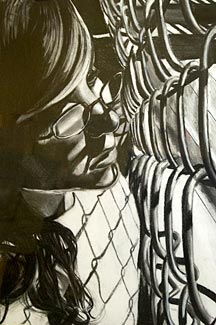 Victoria Lucchese’s art teacher at Smithtown West High School is Steve Halem. Lucchese is planning a career in psychiatry, but she will also continue with her art. Her striking charcoal drawing, “The Fence,” presents a young woman hemmed in closely by a wire fence. The subject is gazing at the wires and the area between them to see through to the other side. The drawing’s confident lines and bold contrasts of white space and dark shadow emphasize the strength of the fence and yet the potential ability of the girl to change her situation. Her mouth suggests dismay, but her eyes are steady: she seems to be contemplating what to do next. The dramatic lighting, casting the fence’s shadow onto the girl’s clothing, seems to enmesh her further into the power of the barrier. She wears glasses, but the artist chose an angle of her face that shows the calm expression in her left, unshaded eye and allows the glasses, rimmed in an echoing shape of the holes in the fence and right up against it, to provide the girl with her own defense − a way to look more clearly into the distance.

When Lucchese drew her picture, she was illustrating the way a person can be hemmed in by bad habits. But because she symbolized the habits as a fence, the picture becomes universal. The fence can also be taken to symbolize a barrier to knowledge. The subject’s interest in the other side of the fence also represents the way a scientist comes up against existing bounds of understanding and thinks of ways to break through barriers to attain new discoveries — why things in nature behave as they do, and how technologies can be improved.

Congratulations to both of these exceptional artists for their “Discovery” pictures, which were chosen with considerable difficulty from among many excellent artworks at the South Bay Art Association’s High School Student’s 2012 Show.