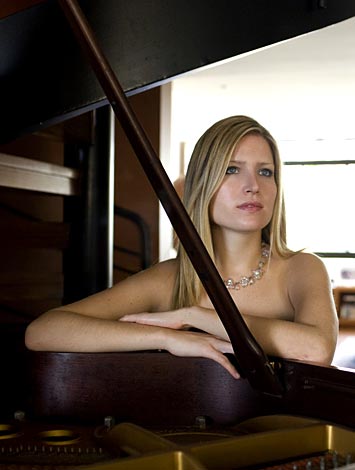 UPTON, NY ─ Lauded by the New York Times as "compelling, elegant, and incisive," pianist Gabriela Martinez has already amassed an impressive list of recital, concerto, and chamber music performance credits. Martinez will perform at the U.S. Department of Energy's Brookhaven National Laboratory on Wednesday, February 13, at noon in Berkner Hall. Sponsored by Brookhaven Science Associates, the concert is free and open to the public. Reservations are not required. All visitors to the Laboratory 16 and older must bring a photo ID.

Since making her orchestral debut at age seven, Gabriela Martinez has appeared as soloist with many orchestras, including the Chicago, New Jersey, Fort Worth, Pacific and San Francisco Symphonies; the Philadelphia Chamber Orchestra; Stuttgarter Philharmoniker; MDR Rundfunkorchester,; Nurnberger Philharmoniker; Symphonisches Staatsorchester Halle; and Tivoli Philharmonic. An avid chamber musician, she has collaborated with ensembles including Itzhak Perlman, and the Takacs and Calder quartets.

Martinez has won numerous national and international prizes and awards. Her most recent accomplishments include winning first prize and the audience award at the Anton G. Rubinstein International Piano Competition in Dresden. She was a semifinalist at the 12th Van Cliburn International Piano Competition, where she also received a Jury Discretionary Award. Her wide-ranging career includes world premieres of new music, live performance broadcasts, and interviews on TV and radio. She has been a Career Grant recipient from the Bagby Foundation for the Musical Arts since 2002.

For the concert at Brookhaven Lab, Martinez will perform from a program presented the previous day at the Merkin Concert Hall in New York City, which includes works by Rachmaninoff, Brosse, Beethoven, Liszt, Barber, Bates and Szymanowski.