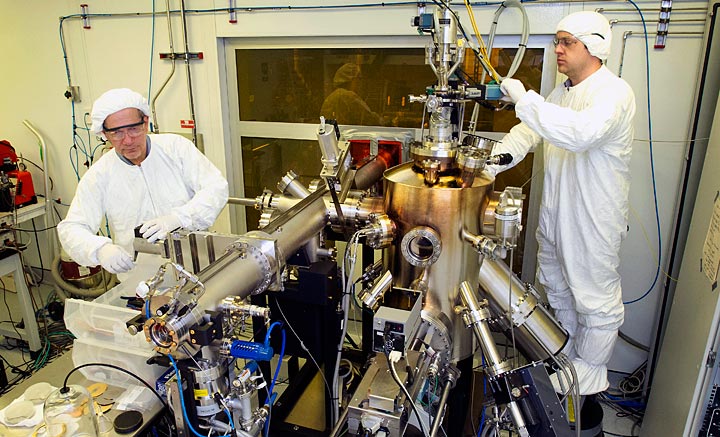 Inside a clean room, Brookhaven physicists Ivan Bozovic (left) and Anthony Bollinger work on the molecular beam epitaxy system that produced the atomically perfect materials used in the study.

UPTON, NY – Identifying the mysterious mechanism underlying high-temperature superconductivity (HTS) remains one of the most important and tantalizing puzzles in physics. This remarkable phenomenon allows electric current to pass with perfect efficiency through materials chilled to subzero temperatures, and it may play an essential role in revolutionizing the entire electricity chain, from generation to transmission and grid-scale storage. Pinning down one of the possible explanations for HTS—fleeting fluctuations called charge-density waves (CDWs)—could help solve the mystery and pave the way for rapid technological advances.

Now, researchers at the Massachusetts Institute of Technology and the U.S. Department of Energy’s Brookhaven National Laboratory have combined two state-of-the-art experimental techniques to study those electron waves with unprecedented precision in two-dimensional, custom-grown materials. The surprising results, published online February 24, 2013, in the journal Nature Materials, reveal that CDWs cannot be the root cause of the unparalleled power conveyance in HTS materials. In fact, CDW formation is an independent and likely competing instability.

“It has been difficult to determine whether or not dynamic or fluctuating CDWs even exist in HTS materials, much less identify their role,” said Brookhaven Lab physicist and study coauthor Ivan Bozovic. “Do they compete with the HTS state, or are they perhaps the very essence of the phenomenon? That question has now been answered by targeted experimentation.” 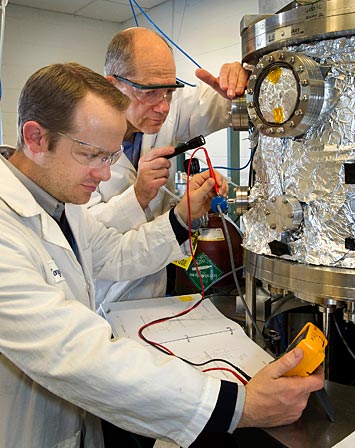 Electricity travels imperfectly through traditional metallic conductors, losing energy as heat due to a kind of atomic-scale friction. Impurities in these materials also cause electrons to scatter and stumble, but superconductors can overcome this hurdle—assuming the synthesis process is precise.

For this experiment, Bozovic used a custom-built molecular beam epitaxy system at Brookhaven Lab to grow thin films of LaSrCuO, an HTS cuprate (copper-oxide) compound. The metallic cuprates, assembled one atomic layer at a time, are separated by insulating planes of lanthanum and strontium oxides, resulting in what’s called a quasi-two-dimensional conductor. When cooled down to a low enough temperature—less than 100 degrees Kelvin—strange electron waves began to ripple through that 2D matrix. At even lower temperatures, these films became superconducting.

“In quasi-two-dimensional metals, low temperatures frequently bring about interesting collective states called charge-density waves,” Bozovic said. “They resemble waves rolling across the surface of a lake under a breeze, except that instead of water, here we actually have a sea of mobile electrons.”

Once a CDW forms, the electron density loses uniformity as the ripples rise and fall. These waves can be described by familiar parameters: amplitude (height of the waves), wavelength (distance between waves), and phase (the wave’s position on the material). Detecting CDWs typically requires high-intensity x-rays, such as those provided by synchrotron light sources like Brookhaven’s NSLS and, soon, NSLS-II. And even then, the technique only works if the waves are essentially frozen upon formation. However, if CDWs actually fluctuate rapidly, they may escape detection by x-ray diffraction, which typically requires a long exposure time that blurs fast motion.

To catch CDWs in action, a research group at MIT led by physicist Nuh Gedik used an advanced ultrafast spectroscopy technique. Intense laser pulses called “pumps” cause excitations in the superconducting films, which are then probed by measuring the film reflectance with a second light pulse—this is called a pump-probe process. The second pulse is delayed by precise time intervals, and the series of measurements allow the lifetime of the excitation to be determined.

In a more sophisticated variant of the technique, largely pioneered by Gedik, the standard single pump beam is replaced by two beams hitting the surface from different sides simultaneously. This generates a standing wave of controlled wavelength in the film, but it disappears rapidly as the electrons relax back into their original state.

This technique was applied to the atomically perfect LaSrCuO films synthesized at Brookhaven Lab. In films with a critical temperature of 26 degrees Kelvin (the threshold beyond which the superconductivity breaks down), the researchers discovered two new short-lived excitations—both caused by fluctuating CDWs.

Gedik’s technique even allowed the researchers to record the lifetime of CDW fluctuations—just 2 picoseconds (a millionth of a millionth of a second) under the coldest conditions and becoming briefer as the temperatures rose. These waves then vanished entirely at about 100 Kelvin, actually surviving at much higher temperatures than superconductivity.

Ruling out a Suspect

The researchers then hunted for those same signatures in cuprate films with slightly different chemical compositions and a greater density of mobile electrons. The results were both unexpected and significant for the future of HTS research.

“Interestingly, the superconducting sample with the highest critical temperature, about 39 Kelvin, showed no CDW signatures at all,” Gedik said.

The consistent emergence of CDWs would have bolstered the conjecture that they play an essential role in high-temperature superconductivity. Instead, the new technique’s successful detection of such electron waves in one sample but not in another (with even higher critical temperature) indicates that another mechanism must be driving the emergence of HTS.

“Results like this bring us closer to understanding the mystery of HTS, considered by many to be one of the greatest problems in physics today,” Bozovic said. “The source of this extraordinary phenomenon is slowly but surely running out of places to hide.”

Additional collaborators on this research include Darrius Torchinsky and Fahad Mahmood of the Massachusetts Institute of Technology, and Anthony Bollinger of Brookhaven National Lab.

The work was funded by the National Science Foundation and DOE’s Office of Science.