The following news release was issued on Monday, April 15 by Stony Brook University (SBU). John Parise, a Brookhaven Lab solid-state chemist with a joint appointment at SBU, is the leader of a research team selected to receive an $800,000 Materials Genome Initiative award from the National Science Foundation. The team is using beamline X17 at the National Synchrotron Light Source (NSLS) to study photocatalysts and predict phase changes in materials under pressure. They will continue their work, probing materials with atomic precision, at the National Synchrotron Light Source II (NSLS-II) when its construction is complete. "The work we are doing at NSLS will be enhanced at NSLS-II," said Parise. "The new light source will give us instantaneous feedback on whether the changes we see in materials in real time are predicted by theory." The team will focus on oxynitrides, which are potential water-splitting agents for the production of hydrogen fuel from water and sunlight. They will use the x-ray powder diffraction beamline at Brookhaven's new state-of-the-art facility when it begins operations in 2015. 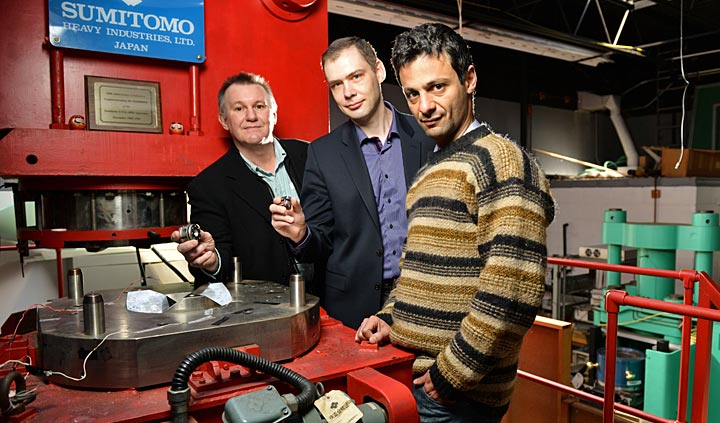 Stony Brook University researchers (from left to right) John Parise, Alexander Orlov and Artem Oganov pictured at a High Pressure Laboratory at Stony Brook University. The Sumitomo Press, installed at Stony Brook in 1985, was the first high-pressure apparatus in North America. The machine is well-suited for synthesis experiments that require the generations of simultaneous high pressures and temperatures in large sample volumes for sustained periods of time.

STONY BROOK, NY – Three Stony Brook University researchers have been selected to receive an $800,000 Materials Genome Initiative (MGI) award from the National Science Foundation (NSF). The MGI is a multi-agency White House supported initiative whose goal is to reduce by half the current time and cost for transitioning breakthroughs from the laboratory to the marketplace – a process that can take as long as two decades.

The researchers have a threefold goal to: create a better photocatalyst; develop sturdy strategies for the prediction, synthesis and testing of materials; and create novel protocols for the functional materials with targets emanating from theory rather than chance. They will focus on oxynitrides which are potential water-splitting agents for the production of hydrogen fuel from water and sunlight.

"High pressure can be a key variable for materials discovery, but it is underutilized because it is considered unsuitable to the rapid turnaround approach," said Professor Parise. "Typically, the large capital costs for the infrastructure that is needed can be restrictive, the throughput is low, and the common perception is that large research teams with banks of high pressure devices are necessary."

Working together the researchers believe that they can change this paradigm by capitalizing on the breakthroughs happening at Stony Brook in theory (Oganov group), novel sensitive co-catalysts for testing material properties (Orlov group) and synthesis techniques that take advantage of powerful x-ray sources at BNL's National Synchrotron Light Source II (Parise group). This combination allows the newly formed OOP group to explore materials genome initiatives using theory-driven approaches to search for materials with specific properties and then creating these targets and measuring their properties.

"We have a built in feedback loop - does synthesis produce the theoretically predicted material?  Does the predicted/synthesized material possess the predicted properties?" asked Parise. "If so, then we are able to use this strategy again and again. If not, then we need to adjust the theory and improve the database of things that work," he said.

"As a class of materials, oxynitrides are recognized as high-value targets," said Parise. "So where does pressure come in?" he asked. "Containing the materials to react – forcing the reaction in a closed system – means that what you put into the reaction is what you get out," he explained. "That's where high pressure comes in - put everything into a pressure vessel and let it react; it is much more difficult to maintain the oxygen/nitrogen ratio when the syntheses are carried out at room pressure."

Thus far, Professor Oganov has predicted novel TaON (tantalum oxygen and nitrogen) and titanium-gallium-oxynitrides, Professor Parise has synthesized the materials and determined their structures and Professor Orlov is testing their water-splitting properties. The researchers believe that time will tell if this is the desired photocatalyst. "When we find a great water splitter then we will scale up the production," Parise said.