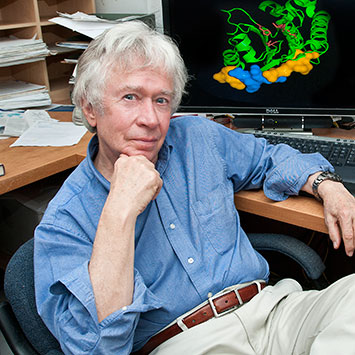 UPTON, NY—Scientists at the U.S. Department of Energy's Brookhaven National Laboratory have identified two promising candidates for the development of drugs against human adenovirus, a cause of ailments ranging from colds to gastrointestinal disorders to pink eye. A paper published in FEBS Letters, a journal of the Federation of European Biochemical Societies, describes how the researchers sifted through thousands of compounds to determine which might block the effects of a key viral enzyme they had previously studied in atomic-level detail.

"This research is a great example of the potential for rational drug design," said lead author Walter Mangel, a biologist at Brookhaven Lab. "Based on studies of the atomic-level structure of an enzyme that's essential for the maturation of adenovirus and how that enzyme becomes active—conducted at Brookhaven's National Synchrotron Light Source (NSLS)—we used computational modeling to search for compounds that might interfere with this enzyme and tested the best candidates in the lab."

Out of 140,000 compounds in a national database, the scientists identified two they expect to be able to turn into antiviral agents to combat adenovirus.

This research is a great example of the potential for rational drug design…based on studies of the atomic-level structure of an enzyme…conducted at Brookhaven's National Synchrotron Light Source.

The need for such antiviral compounds stems from the diversity of human adenoviruses and their ubiquitous effects, Mangel said. Adenoviruses cause many types of respiratory diseases (including outbreaks among military recruits), childhood pneumonias, and eye infections—and may even play a role in obesity. They are particularly dangerous for individuals with impaired immunity, such as transplant recipients and patients with AIDS.

With more than 50 varieties causing this range of diseases, it's unlikely scientists will develop a universally effective vaccine to prevent all strains of adenovirus before infection, Mangel said. But one thing all adenovirus strains share is a common mechanism of making new virus particles once an infection takes root. Targeting that mechanism with antiviral drugs—the approach taken by the Brookhaven team—may be a viable way to battle all adenovirus strains.

Mangel worked with fellow Brookhaven scientists William McGrath and Vito Graziano, along with Kathy Zabrocka, a student from Stanford University who was conducting an undergraduate internship in his lab. The research built on work Mangel's lab initiated years earlier to decipher the atomic-level structure of the adenovirus proteinase, an enzyme conserved throughout all strains of the virus that cleaves proteins during the assembly of new virus particles.

Structures of the adenovirus proteinase in inactive form (turquoise) and activated (yellow) by binding of a co-factor (beige), in association with a promising inhibitor compound identified in this research (circular "ball and stick" molecule). In the inactive form, left, the inhibitor blocks the "pocket" into which the co-factor binds, thus preventing the enzyme from becoming active. In the fully activated enzyme, right, the inhibitor binds in the now-exposed protein-cleaving "active site," thus blocking the enzyme's protein-cleaving ability. The fact that this inhibitor works to disable the proteinase in two different ways at two different sites increases the chance that drugs based on this compound will be successful at fighting adenovirus infection. It also makes it less likely that adenovirus will develop resistance to such drugs.

Over several years, Mangel's group found that the activity of the enzyme was highly regulated by two cofactors, a small piece of another adenovirus protein and the viral DNA. Structures of the enzyme alone and in the presence of its cofactors, determined by x-ray crystallography at the NSLS, revealed key regions that could serve as potential targets for blocking the enzyme's activation or protein-cleaving ability.

"All that remained was to find compounds that bind to these targets to prevent the enzyme from functioning," Mangel said.

To find these compounds, the scientists used a technique called DOCKing, which entails computationally probing a region of the protein structure against databases of small molecules to determine which might bind most strongly. Out of a database of 140,000 potential compounds, the scientists identified 30 molecules predicted to fit best and ordered samples to test for inhibitor activity.

The molecules identified are still too large to be delivered as drugs. So the scientists are working to pare down the size in the design of a second-generation compound based upon the binding portions of the two inhibitors. This new molecule is expected to readily enter adenovirus-infected cells and bind even more tightly to the adenovirus proteinase.

"This work should pave the way for the development of effective drugs against all types of adenovirus infections," Mangel said.