UPTON, NY—In the search for understanding how some magnetic materials can be transformed to carry electric current with no energy loss, scientists at the U.S. Department of Energy's Brookhaven National Laboratory, Cornell University, and collaborators have made an important advance: Using an experimental technique they developed to measure the energy required for electrons to pair up and how that energy varies with direction, they've identified the factors needed for magnetically mediated superconductivity—as well as those that aren't. 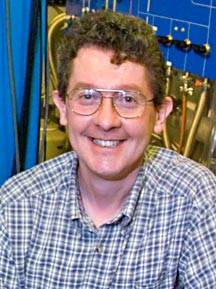 "Our measurements distinguish energy levels as small as one ten-thousandth the energy of a single photon of light—an unprecedented level of precision for electronic matter visualization," said Séamus Davis, Senior Physicist at Brookhaven the J.G. White Distinguished Professor of Physical Sciences at Cornell, who led the research described in Nature Physics. "This precision was essential to writing down the mathematical equations of a theory that should help us discover the mechanism of magnetic superconductivity, and make it possible to search for or design materials for zero-loss energy applications."

The material Davis and his collaborators studied was discovered in part by Brookhaven physicist Cedomir Petrovic ten years ago, when he was a graduate student working at the National High Magnetic Field Laboratory. It's a compound of cerium, cobalt, and indium that many believe may be the simplest form of an unconventional superconductor—one that doesn't rely on vibrations of its crystal lattice to pair up current-carrying electrons. Unlike conventional superconductors employing that mechanism, which must be chilled to near absolute zero (-273 degrees Celsius) to operate, many unconventional superconductors operate at higher temperatures—as high as -130°C. Figuring out what makes electrons pair in these so-called high-temperature superconductors could one day lead to room-temperature varieties that would transform our energy landscape.

"Our measurements distinguish energy levels as small as one ten-thousandth the energy of a single photon of light."

The main benefit of CeCoIn5, which has a chilly operating temperature (-271°C), is that it can act as the "hydrogen atom" of magnetically mediated superconductors, Davis said—a test bed for developing theoretical descriptions of magnetic superconductivity the way hydrogen, the simplest atom, helped scientists derive mathematical equations for the quantum mechanical rules by which all atoms operate. 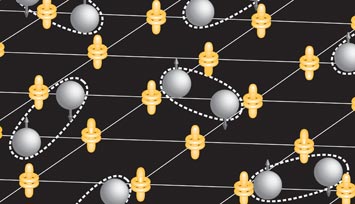 Current-carrying electrons become 'heavy' (grey balls) when they strongly interact with magnetic moments of localized, non-conducting electrons (yellow vertical dumbell surrounded by two rings at each grid vertex). At very low temperature the heavy electrons form superconducting pairs represented by the white dashed ovals. The quantum mechanical wavefunction (the mathematical equation) describing this pairing mechanism was unknown until it was revealed by this study.

"Scientists have thought this material might be 'the one,' a compound that would give us access to the fundamentals of magnetic superconductivity in a controllable way," Davis said. "But we didn't have the tools to directly study the process of electron pairing. This paper announces the successful invention of the techniques and the first examination of how that material works to form a magnetic superconductor."

The method, called quasiparticle scattering interference, uses a spectroscopic imaging scanning tunneling microscope designed by Davis to measure the strength of the "glue" holding electron pairs together as a function of the direction in which they are moving. If magnetism is the true source of electron pairing, the scientists should find a specific directional dependence in the strength of the glue, because magnetism is highly directional (think of the north and south poles on a typical bar magnet). Electron pairs moving in one direction should be very strongly bound while in other directions the pairing should be non-existent, Davis explained. The effect of a magnetic field on a superconductor is to generate an array of electron "whirlpools," referred to as quantum vortices. The existence of the whirlpool array is a fingerprint of superconductivity and can be imaged using a scanning tunneling microscope as shown here for the first time.

To search for this effect, Davis group members Milan P. Allan and Freek Massee used samples of the material made by Petrovic. "To make these experiments work, you have to get the materials exactly right," Davis said. "Petrovic synthesized atomically perfect samples."

With the samples held in the microscope far below their superconducting temperature, the scientists sent in bursts of energy to break apart the electron pairs. The amount of energy it takes to break up the pair is known as the superconducting energy gap.

"When the pairs break up, the two electrons move off in opposite directions. When they hit an impurity in the sample, that makes a kind of interference, like waves scattering off a lighthouse," Davis explained. "We make movies of those standing waves. The interference patterns tell us the direction the electron was traveling for each energy level we send into the system, and how much energy it takes to break apart the pairs for each direction of travel."

This movie shows how the quantum wavelength of the heavy electrons changes with energy. The researchers used these measurements to provide the first-ever quantitative description of the dynamics of heavy fermions because, in quantum mechanics, momentum is inversely proportional to wavelength.

The instrument uses the finest energy resolution for electronic matter visualization of any experiment ever achieved to tease out incredibly small energy differences—increments that are a tiny fraction of the energy of a single photon of light. The precision measurements revealed the directional dependence the scientists were looking for in the superconducting energy gap.

"Our job as scientists is to write down an equation and solve it to give a quantitative description of what we observed, and then use it to describe how magnetic superconductivity works and make and test predictions about how certain new materials will behave," Davis said.

In collaboration with the theory group of Dirk Morr at the University of Illinois at Chicago, Davis' group has developed this mathematical description, or theory. One of the most important things the theory will do, Davis explained, will be to help separate the "epiphenomena," or side effects, from the true phenomena—the fundamental elements essential for superconductivity. 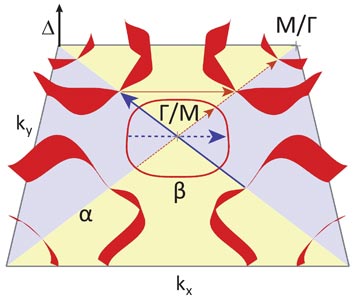 The height above the plane of this diagram represents the energy required to break a superconducting pair of electrons into separate heavy fermions traveling in different directions (as determined from the quasiparticle scattering patterns). The maximum height is at the locations predicted if the "glue" holding the electron pairs together is magnetism.

"Once you know the fundamental issues, which is what these studies reveal, it greatly enhances the probability of discovering a new material with the correct characteristics because you know what you are looking for—and you know what to avoid. We are very enthusiastic that we will be able to provide the theoretical tools for identifying the stuff to avoid when trying to make magnetic superconductors with improved properties," Davis said.

Davis and Petrovic worked with additional collaborators at Brookhaven, Cornell, and St. Andrews. The research was funded by the DOE Office of Science and the U.K. Engineering and Physical Sciences Research Council.