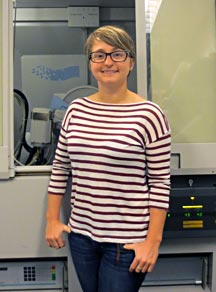 UPTON, NY — Sara Callori, a Stony Brook University (SBU) graduate student, has been awarded the 2013 Gertrude Scharff-Goldhaber Prize, consisting of $1,000 and a certificate. Funded by Brookhaven Science Associates, the company that manages Brookhaven National Laboratory for the U.S. Department of Energy, the award was established in 1992 by Brookhaven Women in Science (BWIS), a nonprofit organization that supports and encourages the advancement of women in science.

The award recognizes substantial promise and accomplishment by women graduate students in physics who are performing their thesis research at Brookhaven Lab, or who are enrolled at SBU. It commemorates the outstanding contributions of the late nuclear physicist Gertrude Scharff-Goldhaber. In 1950, Goldhaber became the first woman Ph.D. physicist appointed to the Brookhaven Lab staff. She also was a founding member of BWIS.

Callori's Ph.D. thesis work focused on ferroelectric materials – materials that are electrically polarized and can have the polarity switched by applying an external electrical field. The materials she studied were superlattices – where the crystals are made of two different types of materials in a layered structure. Coupling of these materials both within and between layers (at the interface) can give rise to either enhanced or totally new electronic behavior. Ferroelectric materials are particularly attractive for memory applications because they can be switched between discrete electrical polarization states, which can act as binary bits (like the 0s and 1s that carry information in computing).  However, there are technical challenges in developing this type of technology, which can be addressed by finding new ways to engineer ferroelectric systems and their properties, including building superlattices.

"Engineering these ferroelectric systems is a key area of study to help understand the physics of ferroelectric memory as well as to further develop it," said Callori. "I am particularly fascinated by the interactions between the layers in these systems and how the non-ferroelectric layers compensate for the polarization. I enjoy the hands-on nature of this work and building and investigating these systems from the ground up, using many different experimental techniques."

Callori earned her B.A. in physics in 2007 from New York University and is currently a joint post-doctoral fellow at the Australian Nuclear Science and Technology Organization and the University of New South Wales in Sydney, Australia. Her current research focuses on neutron scattering on magnetic thin films and multilayer systems.