Stony Brook University released the following news release on Thursday, Nov. 7. Scientists from the U.S. Department of Energy's Brookhaven National Laboratory will play key roles on the Solar System Exploration Research Virtual Institute team. Martin Schoonen, chair of Brookhaven's Environmental Sciences Department, will lead a team of geologists exploring the short- and long-term health effects of astronauts breathing dust on other planetary bodies. Martin and other SSERVI scientists will work with Juergen Thieme, group leader for the Submicron Resolution X-Ray Spectroscopy Beamline, to use x-rays at the National Synchrotron Light Source II (NSLS-II) to study these health effects, to analyze space weathering of materials, and to characterize the makeup of samples of the Moon and near-earth asteroids. In collaboration with senior physicists Derek Lowenstein and Peter Thieberger, the team will also use Brookhaven's NASA Space Radiation Laboratory (NSRL) to simulate the effects of harsh cosmic rays on moon and asteroid materials. 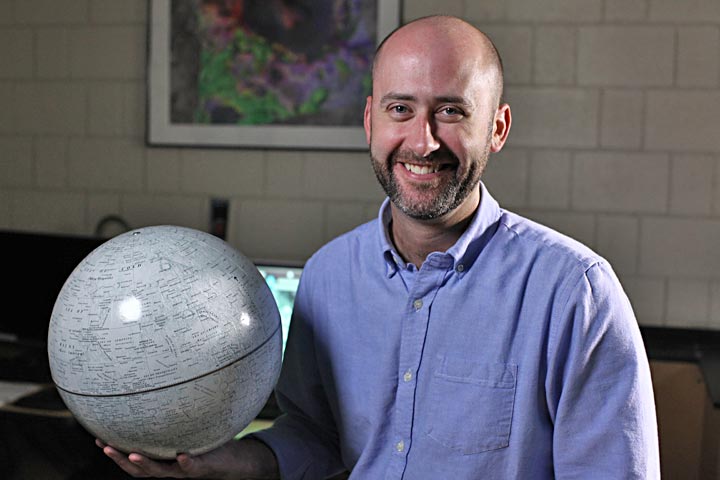 Timothy Glotch. Associate Professor in the Department of Geosciences at Stony Brook University and principal investigator for the RIS4E project.

STONY BROOK, NY, November 7, 2013 – Stony Brook is headed to outer space—virtually. The University has been selected as the lead institution for one of NASA's nine new Solar System Exploration Research Virtual Institute (SSERVI) teams that will bring researchers together in a virtual setting to focus on space science and human space exploration.

The Stony Brook project, "Remote, In Situ and Synchrotron Studies for Science and Exploration"  (RIS4E), led by Timothy Glotch, associate professor in the Department of Geosciences at Stony Brook, is composed of 13 institutions in the US, Canada, and the United Kingdom, and will tackle scientific questions about the Moon, near-earth asteroids, and the Martian moons Phobos and Deimos.

RIS4E will focus on four areas of research; the first of which is remote sensing, interpreting the data transmitted to Earth from orbiters and landers. The second component, led by Dr. Jacob Bleacher of NASA's Goddard Space Flight Center, is simulated human space exploration—researchers will travel to places that mimic the volcanic terrains of the outer space bodies, such as the Kilauea volcanic field on the Big Island of Hawaii. "We will be taking astronauts with us, to teach them how to be field geologists," Glotch says.

The third element of the research involves medical geology, the intertwining of geology and medicine. For example, a team of geologists led by Martin Schoonen, a Stony Brook University professor and chair of the Environmental Sciences Department at Brookhaven National Laboratory, will work with two Stony Brook pharmacology professors, Bruce Demple and Styliani-Anna Tsirka, to understand how the dust that astronauts breathe on the planetary bodies could affect their short- and long-term health.

Finally, the Stony Brook scientists are going to use what will be one of the brightest x-ray light sources in the world—once the National Synchrotron Light Source II (NSLS-II) comes online at Brookhaven National Lab in 2015.

Says Glotch, "We're going to be conducting detailed analyses of samples of the Moon that were brought back by the Apollo astronauts, and primitive meteorites that are related to the very early formation of the solar system. We expect to get detailed geochemical information from these very precious samples, at spatial scales of hundreds of nanometers. This is much, much better than we have ever been able to do before.

"This is a concerted effort on the part of NASA to further our basic scientific understanding in preparation for human exploration of these bodies," he said. "Philosophically, the idea behind the institute is that science enables exploration, and exploration enables science. The work that we're doing to increase our scientific grasp of the Moon, asteroids, and the moons of Mars will lead to future human exploration."

NASA concurs. "We look forward to collaborative scientific discoveries from these teams," says Jim Green, director of the Planetary Science Division of NASA's Science Mission Directorate in Washington. "These results will be vital to NASA successfully conducting the ambitious activities of exploring the solar system with robots and humans."

The team and its information technology lead, David Ecker, IT Director of Research Technologies at Stony Brook University, will utilize modern telecommunications and IT tools—like Adobe Connect and HD video telecom systems—to connect Stony Brook to the other teams for collaborative Web conferencing in virtual meeting rooms.

The NASA funding, at approximately $5.5 million over the next 5 years, will enable Stony Brook to hire 25 graduate student full-time equivalents (FTEs), 9-10 post-doc FTEs, and an administrator. Says Glotch, "We are literally training the next generation of planetary scientists."

The new virtual institute also has a unique partner—the Alan Alda Center for Communicating Science, a Stony Brook School of Journalism initiative. The CCS works to enhance the understanding of science by training scientists and journalists to effectively communicate with the public, public officials, and others outside their discipline.

"CCS will help us train our team members, other SSERVI scientists, and journalists to become better science communicators to the press, public, their peers, and policy makers" Glotch says. "This has the dual benefit of highlighting the team's scientific accomplishments and actively engaging the next generation of science journalists."

Stony Brook will also take this opportunity to launch an undergraduate program in science journalism. The research team will bring students from the program to other institute laboratories and out into the field, where they can interact with scientists. "They'll be blogging about our work," Glotch says. "When they come back from the field, they'll be creating longer-format print and video pieces."

NASA requested proposals for the virtual research institute in October of 2012; Stony Brook submitted in April of 2013. The winning teams, which SSERVI will support for five years at a combined total of about $12 million per year, were selected from a pool of 32 proposals based on peer-review evaluation. SSERVI members include academic institutions, non-profit research institutes, private companies, NASA centers, and other government laboratories.

"We are extremely pleased that the community responded with such high-quality proposals, and look forward to the many contributions SSERVI will make in addressing NASA's science and exploration goals," says SSERVI Director Yvonne Pendleton.

The RIS4E team can be followed on Twitter at @RIS4E_SSERVI.