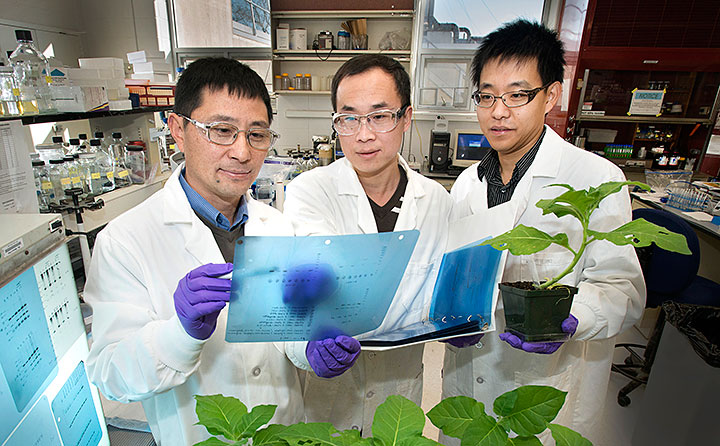 UPTON, NY—Scientists at the U.S. Department of Energy's Brookhaven National Laboratory have identified a new way to regulate the production of phenols, a class of plant products with a wide range of applications for humans. These compounds serve as an important source of flavors, fragrances, and pigments; some are of interest for their possible health-promoting effects; and through their contribution to the construction of plant cell walls, (poly)phenols are the major factor influencing how easy it is to convert biomass to biofuels.

"Finding ways to effectively tailor phenol synthesis toward these different purposes could have a large impact on society," said Chang-Jun Liu, who led the team conducting this research.

"Finding ways to effectively tailor phenol synthesis toward ... different purposes could have a large impact on society."

As described in a paper published in The Plant Cell on December 20, 2013, Liu's team—including postdoctoral research associates Xuebin Zhang and Mingyue Gou—explored an unconventional approach to achieve this goal. The conventional approach takes aim at the regulation of genes that instruct plant cells to make enzymes involved in phenol production. These enzymes are proteins that serve as catalysts to speed up the chemical reactions that synthesize phenols. Instead of trying to regulate how these enzymes are produced, Liu's group looked at how the enzymes might be manipulated after production to control their ability to make plant phenols.

"We know that turning genes on or off can control enzyme levels, therefore influencing the yield of plant products such as phenols," said Liu. "But plants have also developed a very sophisticated system for removing and recycling aberrant or unnecessary proteins/enzymes, and they use this system to regulate their levels. Our goal was to understand how this recycling system might be used to control phenol production." 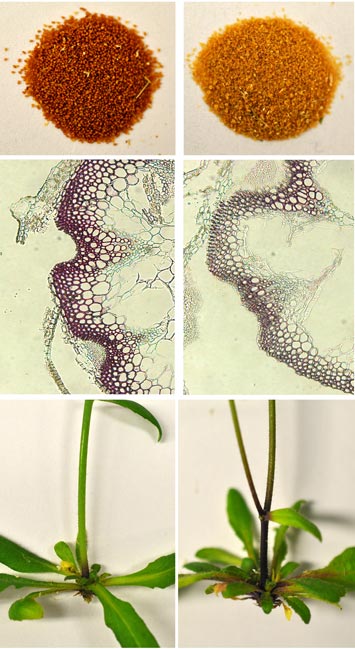 The cellular protein recycling machinery consists of various parts that work together to first identify and biochemically tag the proteins to be broken down, and then feed the unwanted molecules into a structure somewhat analogous to a garbage disposal, which breaks down the molecular components so the cell can reuse them. "We were specifically interested in identifying the components of this system that specify the particular proteins/enzymes to be broken down—which initiates the turnover process for the targeted proteins," Liu said.

The scientists' main finding was the discovery of three such components (called F-box proteins) that specifically recognize the first key enzyme in the series of phenol synthesis reactions. The scientists showed that these three F-box proteins interact with the enzyme (phenylalanine ammonia-lyase, or PAL), leading to its degradation.

They further demonstrated that turning on the genes encoding the F-box proteins reduced the cellular level of PAL in living plant cells. Reduced levels of PAL, in turn, resulted in lower levels of certain plant phenols.

One of the affected products was lignin, a polyphenol that is a component of plant cell walls. Lignin makes biomass particularly hard to break down and convert into liquid fuels. Plants with lower levels of lignin should be easier to convert.

"This strategy of increasing PAL degradation to reduce cell-wall lignin levels could therefore be used to make plant matter easier to break down, thereby improving the ease and efficiency of biofuel production," Liu said.

While the goal of this work was to learn how to improve plant biofuel feedstocks, knowing how to manipulate plant phenols may be useful for other goals, said Liu. For example, the set of molecular tools identified in this study might be used to increase the synthesis of certain phenols that have been shown to exhibit antioxidant properties, which could potentially enhance the health benefits of so-called functional foods.