Plant growth is orchestrated by a spectrum of signals from hormones within a plant. A major group of plant hormones called cytokinins originate in the roots of plants, and their journey to growth areas on the stem and in leaves stimulates plant development. Though these phytohormones have been identified in the past, the molecular mechanism responsible for their transportation within plants was previously poorly understood.

Now, a new study from a research team led by biochemist Chang-Jun Liu at the U.S. Department of Energy's (DOE) Brookhaven National Laboratory identifies the protein essential for relocating cytokinins from roots to shoots.

The research is reported in the February 11 issue of Nature Communications.

Cytokinins stimulate shoot growth and promote branching, expansion and plant height. Regulating these hormones also improves the longevity of flowering plants, tolerance to drought or other environmental stresses, and the efficiency of nitrogen-based fertilizers.

Manipulating cytokinin distribution by tailoring the action of the transporter protein could be one way to increase biomass yield and stress tolerance of plants grown for biofuels or agriculture. "This study may open new avenues for modifying various important crops, agriculturally, biotechnologically, and horticulturally, to increase yields and reduce fertilizer requirements, for instance, while improving the exploitation of sustainable bioenergy resources," Liu said.

Using Arabidopsis, a small flowering plant related to mustard and cabbage that serves as a common experimental model, the researchers studied a large family of transport proteins called ATP-binding cassette (ABC) transporters, which act as a kind of inter- or intra-cellular pump moving substances in or out of a plant's cells or their organelles. While performing gene expression analysis on a set of these ABC transporters, the research team found that one gene – AtABCG14 – is highly expressed in the vascular tissues of roots. 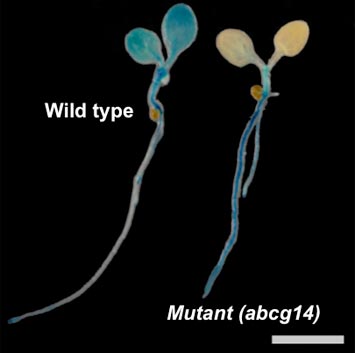 Blue staining shows the distribution of the root-synthesized cytokinins. Knocking out the transporter gene impairs their translocation to leaves (right).

To determine its function, they examined mutant plants harboring a disrupted AtABCG14 gene. They found that knocking out this transporter gene resulted in plants with weaker growth, slenderer stems, and shorter primary roots than their wild-type counterparts. These structural changes in the plants are symptoms of cytokinin deficiencies. Essentially, the long-distance transportation of the growth hormones is impaired, which causes alterations in the development of roots and shoots. The disrupted transport also resulted in losses of chlorophyll, the molecule that transforms absorbed sunlight into energy.

The team then used radiotracers to confirm the role of the AtABCG14 protein in transporting cytokinins through the plants. They fed Carbon-14-labeled cytokinins to the roots of both the wild-type and mutant seedlings. While the shoots of the wild-type plants were full of the hormones, there were only trace amounts in the shoots of the mutant plants, though their roots were enriched. This demonstrates a direct correlation between cytokinin transport and the action of AtABCG14 protein.

"Understanding the molecular basis for cytokinin transport enables us to more deeply appreciate how plants employ and distribute a set of signaling molecules to organize their life activity and for their entire body building," Liu said.

"From a biotechnology view, manipulating the activity of this identified transporter might afford us the flexibility to enhance the capacity and efficiency of plants in energy capture and transformation, and the storage of the reduced carbon, or the ability of plants to adapt to harsh environments, therefore promoting either the production of renewable feedstocks for fuels and bio-based materials, or grain yields to meet our world-wide food and energy demands."

This work was completed in concert with researchers from Palacky University & Institute of Experimental Botany, and St. John's University. It was funded by DOE's Office of Science and the National Science Foundation toward understanding plant cell wall biogenesis and functions of ABC transporters, respectively.