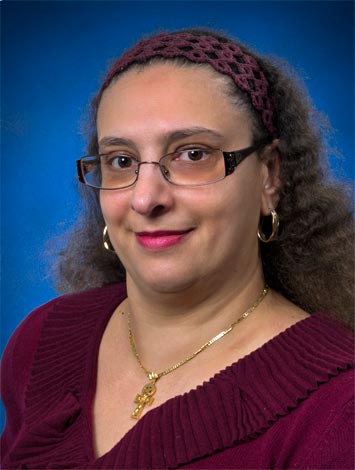 UPTON, NY — The Town of Brookhaven has recognized Brookhaven National Laboratory physicist Mary Bishai as one of the 2014 Women of the Year. Bishai received the honor for her contributions to science and will be honored with 12 other women recognized for their endeavors in areas including medicine, community service, business, and education. The ceremony will be held tonight, Thursday, March 20, 7 p.m. at Brookhaven Town Hall in Farmingville. Each woman was nominated by a member of the community and lives or works in the Town of Brookhaven.

Bishai joined the U. S. Department of Energy's (DOE) Brookhaven National Laboratory in 2004 as a member of the Lab's Electronic Detector Group, working on neutrino flavor physics. She is recognized for her leadership in experimental neutrino physics, in particular for her leading role as project scientist for the Long Baseline Neutrino Experiment (LBNE) — a proposed experiment that will send neutrinos generated at Fermilab through 800 miles of earth to a detector in South Dakota — and for her critical contributions to the measurement of the neutrino beam flux for the Main Injector Neutrino Oscillation Search (MINOS) experiment, which led to the most precise measurements to date of the neutrino atmospheric mass splitting.

Bishai is also a long-time mentor for student researchers at Brookhaven, sponsored by DOE's Science Undergraduate Laboratory Internship program (SULI). As a mentor Bishai helps to inspire our nation's next generation of scientists by providing "hands-on" research experience.

Bishai received her Ph.D. from Purdue in experimental high energy physics in 1999. Before coming to Brookhaven, she worked as a postdoctoral associate at Fermilab at the Tevatron CDF (Collider Detector at Fermilab) experiment, where she was the principal author of a widely cited study measuring quarkonium and B-meson cross sections, recognized as having significantly increased knowledge of heavy quark production.

"I am honored to have been recognized by Brookhaven Town as one of their Women of the Year," said Bishai. "Working at Brookhaven Lab has given me the opportunity to do the type of research I am passionate about. And I am lucky to work with extraordinary scientists who share that passion — studying the deep mysteries of ghostlike neutrinos and how our universe really works."

In a press release, Brookhaven Town Supervisor Ed Romaine said, "I congratulate all the recipients of this prestigious award. Each one is committed to improving the quality of life for so many people in the community and to making Brookhaven a better place to live for everyone. The way that they go about their lives is an inspiration to us all and I thank them for their service."