Recognition for explorations that peer into the heart of nuclear matter, the inner workings of superconductors, and the elusive mixing of different types of neutrinos

UPTON, NY—Three physicists at the U.S. Department of Energy's (DOE) Brookhaven National Laboratory are among 35 scientists selected by DOE's Office of Science from 750 proposals to receive Early Career Research Program funding. Their work spans several subfields of physics—from describing the dynamics of high-energy collisions of atomic nuclei at particle colliders, to exploring magnetic excitations in materials that offer promise for carrying loss-free electric current, to developing new ways to track elusive neutrinos, particles that can pass through most forms of matter undetected.

For researchers based at DOE national laboratories, where DOE typically covers full salary and expenses of laboratory employees, grants will be at least $500,000 per year to cover year-round salary plus research expenses. The research grants are planned for five years.

"By supporting our most creative and productive researchers early in their careers, this program is helping to build and sustain America's scientific workforce," said Patricia M. Dehmer, Acting Director of DOE's Office of Science. "We congratulate this year's winners on having competed successfully for these highly selective awards, and we look forward to following their accomplishments over the next five years."

The Brookhaven awardees are: 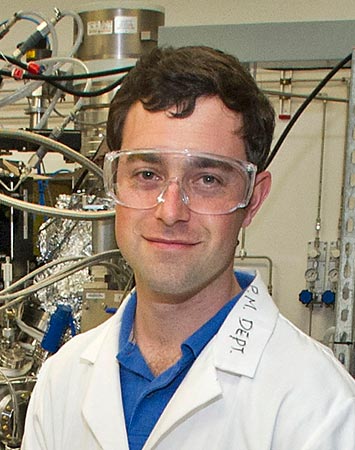 Mark Dean, selected by the Office of Basic Energy Science for: "Probing the Magnetic Excitations in Complex Oxide Interfaces and Heterostructures"

Mark Dean uses advanced x-ray scattering techniques to investigate novel electronic states, such as high temperature superconductivity, that occur in strongly correlated materials. Recently it has been demonstrated that sandwiching together atomically thin layers of transition metal oxides provides an excellent way to control these novel electronic states. Our understanding of these interface phenomena, however, is limited by our lack of tools for probing the details of the magnetic interactions in atomically thin layers. Dean's research will exploit a revolution in inelastic x-ray scattering techniques to measure the magnetic excitations at these interfaces.  These magnetic excitations encode the parameters that describe magnetic interactions in these thin layers of transition metal oxide materials. The goal of the program is to obtain a detailed understanding of the role of interfacial effects in determining magnetic interactions and how this relates to the novel emergent electronic states.

Dean helped pioneer the use of resonant inelastic x-ray scattering (RIXS) to study magnetic spin waves in cuprates and recently discovered never-before-seen excitations that persist in both superconducting and non-superconducting samples. At Brookhaven Lab's soon-to-open National Synchrotron Light Source II, Dean will use its unparalleled brightness to explore even more subtle magnetic interactions. This work is an important step towards exploiting these effects to obtain the desired properties for next generation functional devices.

Dean received his MSci Physics degree from the University of Nottingham in 2006 and his Ph.D. from the University of Cambridge in 2010. He then joined Brookhaven for his postdoctoral research as part of the Center for Emergent Superconductivity and in 2012 was promoted to Assistant Physicist in the X-Ray Scattering Group of Brookhaven's Condensed Matter Physics and Materials Science Department. 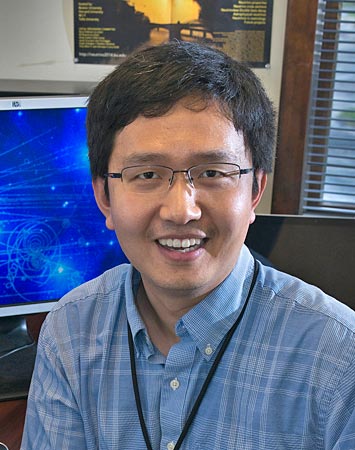 Xin Qian, selected by the Office of High Energy Physics for: "Detector Development towards Precision Measurements of Neutrino Mixing"

Understanding how our universe evolved just after the Big Bang and why the world is made up of matter requires the study of one of the most elementary particles in the cosmos: the neutrino. Though neutrinos are tremendously abundant, streaming from the fiery hearts of stars through every inch of Earth's surface at the speed of light, these elusive particles rarely interact with matter and require vast and sensitive detectors to observe.

Xin Qian is working to develop detectors that precisely measure neutrino properties for experiments such as the proposed Long-Baseline Neutrino Experiment (LBNE), which would send an intense neutrino beam 800 miles through Earth's mantle from Fermi National Accelerator Laboratory near Chicago, Illinois, to detectors at the Homestake Mine in Lead, South Dakota, beginning in 2025. Qian is working to improve the performance of LBNE's Time Projection Chambers—gigantic tanks of supercooled liquid argon weighing over 10,000 tons—where neutrinos interact with argon atoms and create ionized electrons, allowing scientists to identify and probe the properties of these particles.

After earning a B.S. in physics in 2003 from Peking University, Beijing, Qian earned a Ph.D. in experimental nuclear physics in 2010 from Duke University. He was a Robert A. Millikan Postdoctoral Scholar in Experimental Physics from 2010 to 2013 at California Institute of Technology, and then joined BNL as an assistant physicist in 2013. 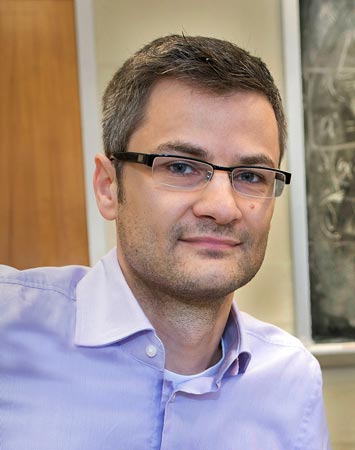 Bjoern Schenke, selected by the Office of Nuclear Physics for: "Development of a Comprehensive Description of High-Energy Nuclear Collisions at RHIC and LHC and Electron-Ion Collisions at a Future Electron-Ion-Collider"

Smashing atomic nuclei together at the Relativistic Heavy Ion Collider (RHIC) in the U.S. and the Large Hadron Collider (LHC) in Europe creates a remarkable state of matter that mimics what the early universe was like a microsecond after its birth. These smashups reveal that the soup of subatomic particles that made up the early universe flowed like a nearly "perfect" fluid with virtually no viscosity. By creating models to accurately describe the patterns of particles flowing out of these collisions, Bjoern Schenke is working to better understand how the internal structure of atomic nuclei leads to the formation of quark-gluon plasma.

Schenke's theories and models are helping physicists understand the interactions of quarks and gluons, which became inextricably bound to form the protons and neutrons that make up the bulk of visible matter in the universe today, and the conditions under which this critical transition takes place. These theories provide strong motivation for building a future particle collider, an Electron-Ion Collider, which will directly probe the internal structure of matter to test these predictions with unprecedented precision.

Schenke earned a B.S. from Justus Liebig University, Giessen, Germany, in 2001, conducted graduate research as part of an award Fellowship at the University of Washington, Seattle, 2002-2003, and earned an M.S. and Ph.D., in 2004 and 2008, respectively, from Goethe University in Frankfurt, Germany. After conducting postdoctoral research as part of a Fellowship at McGill University, he joined Brookhaven Lab as a Research Associate in 2010, was named a Goldhaber Distinguished Fellow in 2012, and in October 2013, became an Assistant Scientist in Brookhaven's Nuclear Theory Group. In 2013 he was awarded the Young Scientist Prize in Nuclear Physics by the International Union of Pure and Applied Physics.