The following press release was issued by the Association of Universities for Research in Astronomy (AURA). In addition to helping guide the scientific mission of the Large Synoptic Survey Telescope (LSST), Brookhaven National Laboratory leads the development of the LSST's CCD sensors, the array of precise and sensitive electronics that will capture images within the telescope's 3.2-gigapixel digital camera. For more about Brookhaven's role, visit the the Lab's LSST website, or contact Justin Eure, (631) 344-2347, jeure@bnl.gov or Peter Genzer, (631) 344-3174, genzer@bnl.gov.

National Science Foundation To Support Start of Construction for the LSST 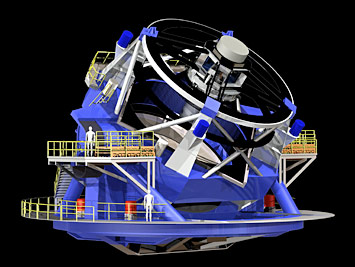 The LSST will peer at distant galaxies to probe the mysteries of dark matter and dark energy.

The National Science Foundation (NSF) agreed on Friday to support the Association of Universities for Research in Astronomy (AURA) to manage the construction of the Large Synoptic Survey Telescope (LSST).  This marks the official federal start of the LSST project, the top-ranked major ground-based facility recommended by the National Research Council's Astronomy and Astrophysics decadal survey committee in its 2010 report, New Worlds, New Horizons. It is being carried out as an NSF and Department of Energy (DOE) partnership, with NSF responsible for the telescope and site, education & outreach, and the data management system, and DOE providing the camera and related instrumentation.  Both agencies expect to support post-construction operation of the observatory.

The NSF construction budget for LSST is not to exceed $473M.  The DOE Camera fabrication budget will be baselined later this year, but is estimated to be $165M.  Operations costs will be around $40M per year for the ten-year survey.  With the approved start occurring now, LSST will see first light in 2019 and begin full science operations in 2022.  Today's action culminates over ten years of developing, planning and reviewing of the LSST concept.

LSST Project Manager, Victor Krabbendam, was delighted to receive the welcome news from NSF:  "This agreement is a tribute to the hard work of an exceptional team of highly skilled individuals, many of whom have dedicated more than a decade to bringing LSST to this point.  After a rigorous design and development phase, the project team is ready to get down and dirty and actually build this amazing facility."

LSST Director, Steven Kahn of Stanford University, commented on the unique contributions LSST will make to astronomy and fundamental physics:  "The broad range of science enabled by the LSST survey will change our understanding of the dynamic Universe on timescales ranging from its earliest moments after the Big Bang to the motions of asteroids in the solar system today.  The open nature of our data products means that the public will have the opportunity to share in this exciting adventure along with the scientific community.  The most exciting discoveries will probably be those we haven't yet even envisioned!"

William Smith, the President AURA, expressed his enthusiasm for AURA's role in the Project:  "AURA is proud to provide management for the construction of LSST, an activity clearly aligned with our mission to promote excellence in astronomical research by providing access to state-of-the-art facilities.  Joining the Space Telescope Science Institute, the National Solar Observatory, the National Optical Astronomy Observatory, and the Gemini Telescope as AURA Centers, LSST is a new paradigm in ground-based astronomy that will revolutionize both our cosmic knowledge and the open and collaborative methods of acquiring that knowledge."

By digitally imaging the sky for a decade, the LSST will produce a petabyte-scale database enabling new paradigms of knowledge discovery for transformative STEM education.  LSST will address the most pressing questions in astronomy and physics, which are driving advances in big data science and computing.  LSST is not "just another telescope" but a truly unique discovery engine.

The early development of LSST was supported by the LSST Corporation (LSSTC), a non-profit consortium of universities and other research institutions.  Fabrication of the major mirror components is already underway, thanks to private funding received from the Charles and Lisa Simonyi Foundation for Arts and Sciences, Bill Gates, and other individuals.  Receipt of federal construction funds allows major contracts to move forward, including those to build the telescope mount assembly, the figuring of the secondary mirror, the summit facility construction, the focal plane sensors, and the camera lenses.

LSST's construction funding will be provided through NSF's Major Research Equipment and Facilities (MREFC) account.  LSST passed its NSF Final Design Review in December of 2013; the National Science Board gave the NSF conditional approval to move the project to construction status in May of 2014.  On the DOE side, LSST received Critical Decision-1 approval (CD-1) in 2011 and also just received CD-3a approval, which allows the project to move forward with long-lead procurements.  The CD-2 review will take place the first week in November, with approval expected shortly afterward, formally fixing the baseline budget for completion of the camera project.  The Particle Physics Project Prioritization Panel (P5), an advisory subpanel of the High Energy Physics Advisory Panel (HEPAP), recommended last month that DOE move forward with LSST under all budget scenarios, even the most pessimistic.

The Association of Universities for Research in Astronomy (AURA) is a consortium of 39 US institutions and 6 international affiliates that operates world-class astronomical observatories. AURA's role is to establish, nurture, and promote public observatories and facilities that advance innovative astronomical research. In addition, AURA is deeply committed to public and educational outreach, and to diversity throughout the astronomical and scientific workforce. AURA carries out its role through its astronomical facilities.

LSST project activities are supported through a partnership between the National Science Foundation (NSF) and the Department of Energy. NSF supports LSST through a Cooperative Agreement managed by the Association of Universities for Research in Astronomy (AURA). The Department of Energy funded effort is managed by the SLAC National Accelerator Laboratory (SLAC).  Additional LSST funding comes from private donations, grants to universities, and in-kind support from Institutional Members of LSSTC.  Learn more at lsst.org.