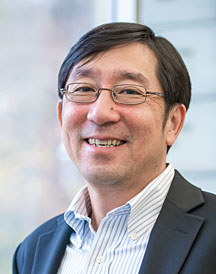 Successfully commissioned at SLAC in 2009, LCLS produces highly focused, ultrafast x-ray pulses like flashes from a high-speed strobe light. This enables scientists from around the world to take stop-motion pictures of atoms and molecules in chemical reactions, shedding light on the fundamental processes of chemistry to help solve important protein structures, and understand materials' properties and responses in extreme conditions.

During his BSA Distinguished Lecture, Kao will provide an overview of scientists' first five years exploring uses for this extraordinary light source, including their advances in understanding the source, scientific discoveries, and future plans for the facility.

This lecture is scheduled to be webcast live and archived online at www.bnl.gov/video.

Kao earned a Ph.D. in chemical engineering at Cornell University in 1988. He arrived at Brookhaven Lab as a postdoc in 1988 and was promoted to a number of roles, eventually serving as chair of the National Synchrotron Light Source from 2006 to 2010. Kao took on his next role, as director of the Stanford Synchrotron Radiation Lightsource, in 2010 and was named director of SLAC National Accelerator Laboratory in 2012. Kao is a fellow of the American Association for the Advancement of Science and American Physical Society, and he shared one of the so-called "Oscars of Invention," an R&D 100 Award, in 2006.