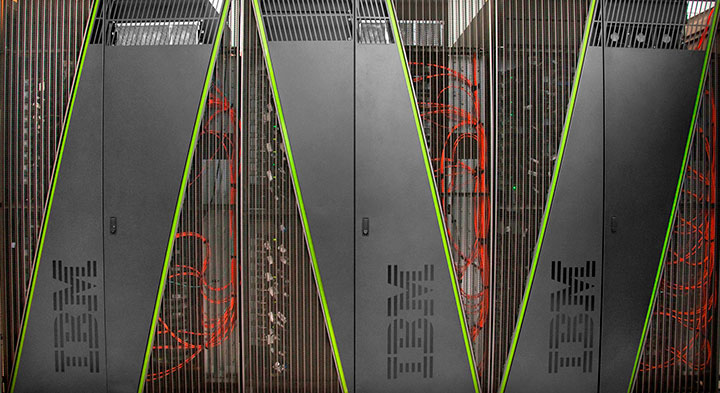 UPTON, NY—Building on its capabilities in computational science and data management, the U.S. Department of Energy's (DOE) Brookhaven National Laboratory is embarking upon a major new Computational Science Initiative (CSI). This program will leverage computational science expertise and investments across multiple programs at the Laboratory—including the flagship facilities that attract thousands of scientific users each year—further establishing Brookhaven as a leader in tackling the "big data" challenges at the frontiers of scientific discovery. Key partners in this endeavor include nearby universities such as Columbia, Cornell, New York University, Stony Brook, and Yale, and IBM Research.

"The CSI will bring together under one umbrella the expertise that drives [the success of Brookhaven's scientific programs] to foster cross-disciplinary collaboration and make optimal use of existing technologies, while also leading the development of new tools and methods that will benefit science both within and beyond the Laboratory."

"Advances in computational science and management of large-scale scientific data developed at Brookhaven Lab have been a key factor in the success of the scientific programs at the Relativistic Heavy Ion Collider (RHIC), the National Synchrotron Light Source (NSLS), the Center for Functional Nanomaterials (CFN), and in biological, atmospheric, and energy systems science, as well as our collaborative participation in international research endeavors, such as the ATLAS experiment at Europe's Large Hadron Collider," said Robert Tribble, Brookhaven Lab's Deputy Director for Science and Technology, who is leading the development of the new initiative. "The CSI will bring together under one umbrella the expertise that drives this success to foster cross-disciplinary collaboration and make optimal use of existing technologies, while also leading the development of new tools and methods that will benefit science both within and beyond the Laboratory."

A centerpiece of the initiative will be a new Center for Data-Driven Discovery (C3D) that will serve as a focal point for this activity. Within the Laboratory it will drive the integration of intellectual, programmatic, and data/computational infrastructure with the goals of accelerating and expanding discovery by developing critical mass in key disciplines, enabling nimble response to new opportunities for discovery or collaboration, and ultimately integrating the tools and capabilities across the entire Laboratory into a single scientific resource. Outside the Laboratory C3D will serve as a focal point for recruiting, collaboration, and communication.

The people and capabilities of C3D are also integral to the success of Brookhaven's key scientific facilities, including those named above, the new National Synchrotron Light Source II (NSLS-II), and a possible future electron ion collider (EIC) at Brookhaven. Hundreds of scientists from Brookhaven and thousands of facility users from universities, industry, and other laboratories around the country and throughout the world will benefit from the capabilities developed by C3D personnel to make sense of the enormous volumes of data produced at these state-of-the-art research facilities.

The CSI in conjunction with C3D will also host a series of workshops/conferences and training sessions in high-performance computing—including annual workshops on extreme-scale data and scientific knowledge discovery, extreme-scale networking, and extreme-scale workflow for integrated science. These workshops will explore topics at the frontier of data-centric, high-performance computing, such as the combination of efficient methodologies and innovative computer systems and concepts to manage and analyze scientific data generated at high volumes and rates.

"The missions of C3D and the overall CSI are well aligned with the broad missions and goals of many agencies and industries, especially those of DOE's Office of Science and its Advanced Scientific Computing Research (ASCR) program," said Robert Harrison, who holds a joint appointment as director of Brookhaven Lab's Computational Science Center (CSC) and Stony Brook University's Institute for Advanced Computational Science (IACS) and is leading the creation of C3D.

The CSI at Brookhaven will specifically address the challenge of developing new tools and techniques to deliver on the promise of exascale science—the ability to compute at a rate of 1018 floating point operations per second (exaFLOPS), to handle the copious amount of data created by computational models and simulations, and to employ exascale computation to interpret and analyze exascale data anticipated from experiments in the near future.

"Without these tools, scientific results would remain hidden in the data generated by these simulations," said Brookhaven computational scientist Michael McGuigan, who will be working on data visualization and simulation at C3D. "These tools will enable researchers to extract knowledge and share key findings."

Through the initiative, Brookhaven will establish partnerships with leading universities, including Columbia, Cornell, Stony Brook, and Yale to tackle "big data" challenges.

"Many of these institutions are already focusing on data science as a key enabler to discovery," Harrison said. "For example, Columbia University has formed the Institute for Data Sciences and Engineering with just that mission in mind."

Computational scientists at Brookhaven will also seek to establish partnerships with industry. "As an example, partnerships with IBM have been successful in the past with co-design of the QCDOC and BlueGene computer architectures," McGuigan said. "We anticipate more success with data-centric computer designs in the future."

An area that may be of particular interest to industrial partners is how to interface big-data experimental problems (such as those that will be explored at NSLS-II, or in the fields of high-energy and nuclear physics) with high-performance computing using advanced network technologies. "The reality of 'computing system on a chip' technology opens the door to customizing high-performance network interface cards and application program interfaces (APIs) in amazing ways," said Dantong Yu, a group leader and data scientist in the CSC.

"In addition, the development of asynchronous data access and transports based on remote direct memory access (RDMA) techniques and improvements in quality of service for network traffic could significantly lower the energy footprint for data processing while enhancing processing performance. Projects in this area would be highly amenable to industrial collaboration and lead to an expansion of our contributions beyond system and application development and designing programming algorithms into the new arena of exascale technology development," Yu said.

"The overarching goal of this initiative will be to bring under one umbrella all the major data-centric activities of the Lab to greatly facilitate the sharing of ideas, leverage knowledge across disciplines, and attract the best data scientists to Brookhaven to help us advance data-centric, high-performance computing to support scientific discovery," Tribble said. "This initiative will also greatly increase the visibility of the data science already being done at Brookhaven Lab and at its partner institutions."