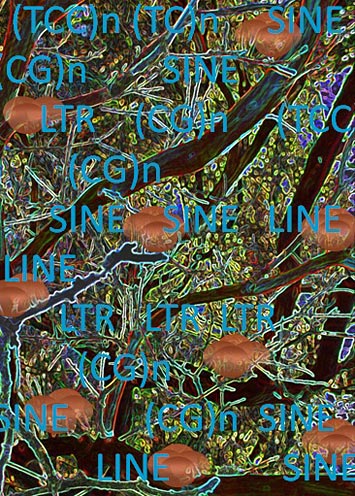 Illustration of p53 binding to major categories of repeats in the human genome, such as LTR, SINE and LINE.

Scientists from the US Department of Energy's Lawrence Berkeley National Laboratory (Berkeley Lab) have learned new details about how an important tumor-suppressing protein, called p53, binds to the human genome. As with many things in life, they found that context makes a big difference.

The researchers mapped the places where p53 binds to the genome in a human cancer cell line. They compared this map to a previously obtained map of p53 binding sites in a normal human cell line. These binding patterns indicate how the protein mobilizes a network of genes that quell tumor growth.

They found that p53 occupies various types of DNA sequences, among them are sequences that occur in many copies and at multiple places in the genome. These sequences, called repeats, make up about half of our genome, but their function is much less understood than the non-repeated parts of the genome that code for genes.

It's been known for some time that p53 binds to repeats, but the Berkeley Lab scientists discovered something new: The protein is much more enriched at repeats in cancer cells than in normal cells. The binding patterns in these cell lines are very different, despite the same experimental conditions. This is evidence, they conclude, that in response to the same stress signal, p53 binds to the human genome in a way that is selective and dependent on cell context—an idea that has been an open question for years.

The research is published online Nov. 21 in the journal PLOS ONE.

"It is well established that p53 regulates specific sets of genes, depending on the cell type and the DNA damage type. But how that specificity is achieved, and whether p53 binds to the genome in a selective manner, has been a matter of debate. We show that p53 binding is indeed selective and dependent on cell context," says Krassimira Botcheva of Berkeley Lab's Life Sciences Division. She conducted the research with Sean McCorkle of Brookhaven National Laboratory.

What exactly does cell context mean in this case? The DNA that makes up the genome is organized into chromatin, which is further packed into chromosomes. Different cell types differ by their chromatin state. Cancer can change chromatin in a way that doesn't affect DNA sequences, a type of change that is called epigenetic.  The new research indicates that epigenetic changes to chromatin may have a big impact on how p53 does its job.

"To understand p53 tumor suppression functions that depend on DNA binding, we have to examine these functions in the context of the dynamic, cancer-associated epigenetic changes," says Botcheva.

Their finding is the latest insight into p53, one of the most studied human proteins. For the past 35 years, scientists have explored how the protein fights cancer. After DNA damage, p53 can initiate cell cycle arrest to allow time for DNA repair. The protein can promote senescence, which stops a cell from proliferating. It can also trigger cell death if the DNA damage is severe.

Much of this research has focused on how p53 binds to the non-repeated part of the genome, where the genes are located. This latest research suggests that repeats deserve a lot of attention too.

"Our research indicates that p53 binding at repeats could be essential for maintaining the genomic stability," says Botcheva. "Repeats could have a significant impact on the way the entire p53 network is mobilized to ensure tumor suppression."

The research was supported by the U.S. Department of Energy's Office of Science.

DOE's Office of Science is the single largest supporter of basic research in the physical sciences in the United States, and is working to address some of the most pressing challenges of our time. For more information, please visit the Office of Science website at science.energy.gov/.