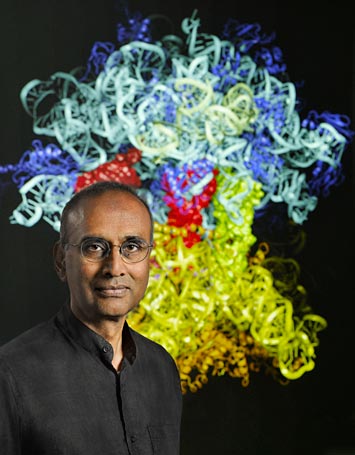 UPTON, NY — Venki Ramakrishnan, who shared the 2009 Nobel Prize for Chemistry—one of seven Nobel Prizes awarded for discoveries made at the U.S. Department of Energy's Brookhaven National Laboratory—will present a BSA Distinguished Lecture at Brookhaven Lab on Wednesday, Sept. 30. Ramakrishnan will speak in Berkner Hall at 4 p.m. and his talk is titled "One Hundred Years of Visualizing Molecular Structure."

Before molecules were first seen, chemists inferred their existence as specific arrangements of atoms in the 19th century. Then one hundred years ago, scientists aimed x-rays at crystal samples and analyzed how those x-rays scattered as they interacted with samples' building blocks—a technique called x-ray crystallography—for the first direct observations of molecules that had been predicted.

Over the years, researchers have used x-ray crystallography to look at simple molecules such as common salt, which has just two atoms, and other molecules far more complex, such as the ribosome, a cellular complex that produces the thousands of proteins required for living cells and contains nearly one million atoms.

During his BSA Distinguished Lecture, Ramakrishnan will describe some highlights of obtaining molecular structures in the past 100 years. He will conclude with how recent developments in electron microscopy are creating a new range of possibilities to visualize biological structures.

Ramakrishnan earned a bachelor's degree in physics from Baroda University in India in 1971 and a Ph.D. in physics from Ohio University in 1976. After developing an interest in biology, he re-entered graduate school, this time in the Biology Department of the University of California, San Diego. He began postdoctoral work at Yale University in 1978, when he first began studying the ribosome. He was a staff scientist in Brookhaven Lab's Biology Department for 12 years—from 1983 to 1995—before becoming a professor of biochemistry at the University of Utah. In 1999, he moved to his current position as a group leader at the Medical Research Council Laboratory of Molecular Biology in Cambridge, England.

Ramakrishnan is a Fellow of the Royal Society, and a member of the European Molecular Biology Organization and U.S. National Academy of Sciences. He received the Louis-Jeantet Prize for Medicine in 2007. He shared the Nobel Prize for Chemistry in 2009 for producing atomic-level images that helped reveal the inner workings of the ribosome. Data for the early stages of this work were collected at the National Synchrotron Light Source (NSLS) at Brookhaven Lab, a facility that provided 18,400 researchers with x-ray, ultraviolet, and infrared light for countless experiments that led to many discoveries and two Nobel Prizes—including the one Ramakrishnan shared—before operations at NSLS ended in October 2014. NSLS-II, a new DOE Office of Science User Facility at Brookhaven Lab, was dedicated in February 2015 and can provide x-rays 10,000 times brighter than its predecessor.

This lecture is also scheduled to be webcast live and archived online at www.bnl.gov/video.