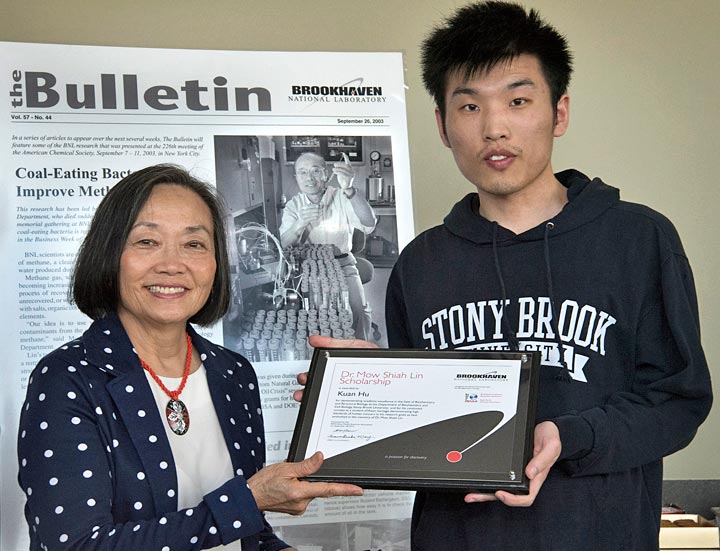 UPTON, NY — At a ceremony held at Brookhaven National Laboratory on September 28, Kuan Hu, a graduate student in the Department of Biochemistry and Cell Biology at Stony Brook University (SBU) was awarded the 11th annual Mow Shiah Lin Scholarship. The Asian Pacific American Association at the U.S. Department of Energy's Brookhaven National Laboratory sponsors the scholarship, which consists of $1,000 and a plaque, to honor the distinguished late Brookhaven Lab scientist for whom it was named.

Hu, currently pursuing his Ph.D in biochemistry and structural biology at SBU, is conducting research at Brookhaven National Laboratory under the direction of his advisor and mentor, Huilin Li. Hu's research focuses on understanding the structure and function of PafE, a novel proteasome activator most recently found in Mycobacterium tuberculosis, the causative agent of tuberculosis.  This work provides a new target for the development of small molecular inhibitors that may lead to future treatment of tuberculosis patients.

"I am honored to receive this award," said Hu. "I am also grateful for the opportunity to be mentored by extraordinary scientists at Brookhaven and SBU. This award will help me obtain my Ph.D and embark on a career toward new discoveries in the field of biochemistry that may lead to better treatments and possibly the eradication of specific diseases."

Mow Shiah Lin began his career at Brookhaven Lab in 1975 as a postdoctoral fellow and advanced to co-lead a research team working with an environmental remediation company to use selected bacteria to convert toxic oil wastes such as used motor oils into useful products. In 2001, Lin shared an R&D 100 Award, given by R&D Magazine for the top 100 technological achievements of the year, for developing a technology to recover silica from geothermal brine. Lin died suddenly from a brain aneurysm at the height of his career in 2003, and his coworkers, friends and family contributed funds to establish the scholarship.

In memory of the manner in which Lin began his career, the scholarship is granted annually to a student of Asian heritage with a U.S. student visa who is studying at an accredited institution of higher education on Long Island (including Brooklyn and Queens), working toward a graduate degree in environmental and energy technology, biology, or chemistry.