An aerial view of the Relativistic Heavy Ion Collider

UPTON, NY—Theoretical physicists from the U.S. Department of Energy's (DOE) Brookhaven National Laboratory will serve as principal investigators for two of three recently announced collaborative projects exploring the theoretical underpinnings of nuclear physics. These five-year "Topical Collaborations in Nuclear Theory" were selected through a competitive peer review process for funding by the Office of Nuclear Physics within the DOE Office of Science and are just getting underway.

"Brookhaven Lab is a leader in the field of nuclear physics, running the Relativistic Heavy Ion Collider (RHIC), one of the field's essential experimental facilities, and supporting a world-renowned nuclear theory group with diverse intellectual interests and capabilities. It is therefore particularly gratifying that the peer review process, which considered a number of strong proposals, has afforded Brookhaven the opportunity to provide intellectual leadership on two of the three selected projects," said Berndt Mueller, Brookhaven Lab's Associate Laboratory Director for Nuclear and Particle Physics.

Advances in nuclear theory—along with experiments those theories help to drive and interpret—expand our understanding of the building blocks of matter, the astrophysical origin of elements, the properties of fundamental particles, and their implications for broader theories that describe the world around us. Some of the central goals of the Topical Collaborations in Nuclear Theory are to bring together groups of leading nuclear theorists, leverage the resources of small research groups, and provide expanded opportunities for the next generation of nuclear theorists. The collaborations are intended to function as hubs of a network of scientists that support sustained interaction and communication within the network and provide a mechanism for placing new researchers in permanent positions in nuclear theory.

The two Brookhaven-led projects are directly related to the research at RHIC, a DOE Office of Science User Facility where nearly one thousand nuclear physicists from around the world collaborate to explore the fundamental building blocks of nuclear matter—the quarks and gluons that make up protons and neutrons—and the force through which they interact. They do so by colliding the nuclei of large atoms such as gold to recreate tiny specks of matter as it existed in the very early universe, before quarks became confined within larger particles such as the protons and neutrons that make up most of the visible matter of the universe today. 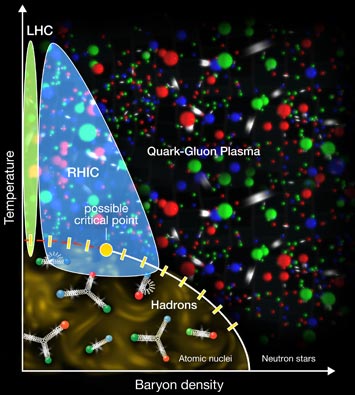 Physicists in the Beam Energy Scan Theory Collaboration are helping to map points on the nuclear phase diagram.

One project, led by Swagato Mukherjee, will construct and provide a theoretical framework for interpreting the results from the ongoing Beam Energy Scan program at RHIC.

"The Beam Energy Scan is a systematic exploration of how the transition of ordinary nuclear matter (protons and neutrons) to quark-gluon plasma (QGP) changes over various collision energies," Mukherjee said. "This project has two main goals. One is to discover (or put constraints on the existence of) a 'critical point' in the nuclear phase diagram—the point where the transition from ordinary nuclear matter to QGP changes from a smooth crossover between the two phases to a sudden shift, like water boiling in a pot. The second goal is to locate the onset of 'chiral symmetry restoration'—the definitive point where quarks and gluons are set 'free' from the bounds of individual protons and neutrons—by observing correlations related to anomalous hydrodynamic effects in the quark-gluon plasma."

The theorists will develop a set of tools, models, and codes that will be used to analyze RHIC Beam Energy Scan data and will be made available to the research community.

The collaboration plans to provide partial support for hiring at least two tenure-track nuclear theorists at universities in the U.S., and will organize workshops and summer schools related to the physics goals of the collaboration.

Read more in this DEIXIS: Computational Science at the National Laboratories story on this project. 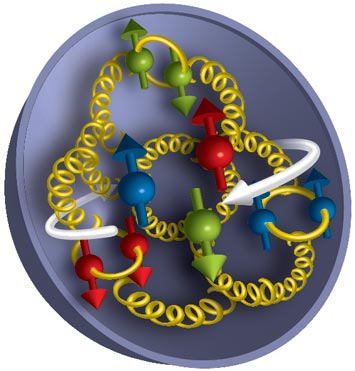 The TMD Collaboration will explore the internal structure of the proton and how it relates to overall nucleon properties such as proton spin.

The second project, led by Jianwei Qiu, will develop theoretical tools for studying the three-dimensional (3D) motion of quarks and gluons while they are confined inside protons and neutrons (collectively known as nucleons), which are the fundamental building blocks of all atomic nuclei.

"The nucleon is not static but has a complex internal structure, the dynamics of which are only beginning to be revealed in modern experiments," Qiu said. "But understanding this internal structure and how it relates to the overall nucleon properties, such as proton spin, is a great intellectual challenge, because the most powerful detector cannot see the quarks and gluons individually within the nucleons. Instead, we must develop reliable theoretical tools for connecting experimental measurements of protons to the quarks and gluons inside them so we can extract tomographic images of the protons' internal quark-gluon structure."

This collaboration establishes a unique three-pronged scientific effort pulling together expertise in both theory and phenomenology of quantum chromodynamics (QCD)—the theory that describes the interactions of quarks and gluons—as well as in "lattice QCD," the supercomputer-based calculation method used to solve the complex mathematical equations of QCD.  This group of theorists, known as the TMD Collaboration, will further develop and perfect the "transverse momentum dependent (TMD) QCD factorization." This is theoretical framework that enables physicists to relate experimental measurements to the 3D momentum landscape inside the nucleon using data from research facilities such as RHIC, Jefferson Laboratory, CERN, and a future proposed Electron-Ion Collider.

"We are making a concerted effort to bring in new people and to train young scientists," Qiu said, noting that the project will support two new tenure-track junior faculty positions and leverage existing support to have six new postdoctoral fellows and five graduate or undergraduate students working with the collaboration.

"Our scientists are excited and honored to be selected to lead these projects, which will support research in priority areas of the new Long Range Plan for Nuclear Science and are of strategic importance to the national nuclear physics community," Mueller said.