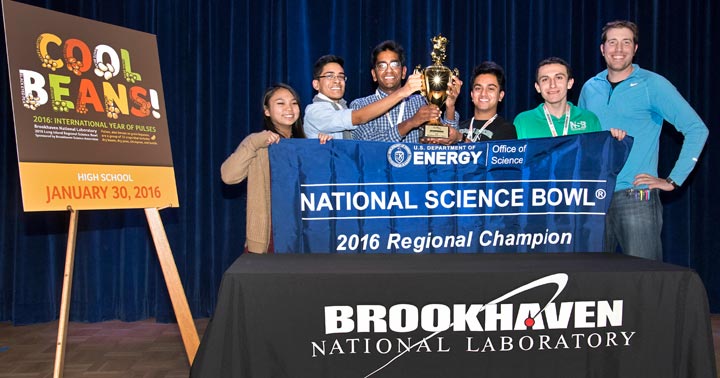 Pictured with their coach, Peter Macchia, are the students from Farmingdale High School who took top honors at the Regional High School Science Bowl held at Brookhaven Lab January 30. From left to right are Clarisse Baes, Ramin Chowdhury, Hamza Malick, Suraj Muralidharan, and Jake Chammas. The team will be awarded an all-expenses-paid trip to the National Finals in Washington, DC, scheduled for April 28-May 2.

UPTON, NY — For the second year in a row, Farmingdale High School won the Brookhaven National Laboratory/Long Island Regional High School Science Bowl, which was held at the Lab on Saturday, January 30. Farmingdale competed against 19 other teams from across Long Island in one of the nation's regional competitions of the 26th Annual U.S. Department of Energy National Science Bowl® (NSB). As the winning team, Farmingdale will be awarded an all-expenses-paid trip to the National Finals in Washington, D.C., scheduled for April 28-May 2.

"The National Science Bowl® continues to be one of the premier academic competitions across the country, and prepares America's students for future successes in some of the world's fastest growing fields in research and engineering," said U.S. Energy Secretary Moniz. "I am honored to congratulate all of the competitors who are advancing to the national finals where they will continue to showcase their talents as top students in math and science."

Middle and high school student teams from diverse backgrounds are each made up of four students, one alternate, and a teacher who serves as an advisor and coach. These teams face off in a fast-paced question-and-answer format, being tested on a range of science disciplines including biology, chemistry, earth science, physics, energy, and math. 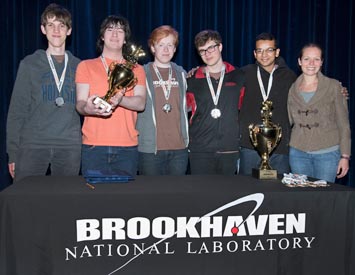 Farmingdale coach Peter Macchia, an earth science teacher, said the team worked very hard for their victory. "We took a different approach this year," Macchia said. "Instead of trying to win a trophy, they were preparing for college. So, they benefitted from studying together almost every day, and win or lose, they can now be successful in college."

Farmingdale's team consisted of four seniors—Clarisse Baes, Ramin Chowdhury, Suraj Muralidharan, Jake Chammas—and junior Hamza Malick. The senior students are still deciding where to go to college, but are eager to get their acceptance letters from schools across the country.

Farmingdale students boasted about their strengths as a team this year. "This win feels even better than last year because we focused on teamwork, which led us to become even closer friends," said Clarisse Baes. "We are grateful to our coach for his guidance and for mentoring us for this competition."

Farmingdale's team captain, Suraj Muralidharan is eager to go to Nationals for the second time. "Going to the national competition in Washington DC was awesome, going twice will be even better!" Muralidharan said.

Hamza Malick said that winning was a testament to their hard work, and that he will miss his teammates since they are all graduating and heading to college. But he plans to return next year to garner a three-time win.

In the competition at Brookhaven Lab, participating students received a Science Bowl t-shirt, and winning teams also received trophies, medals, and cash awards. Prizes are courtesy of Brookhaven Lab's event sponsor, Brookhaven Science Associates, the company that manages and operates the Lab for the U.S. Department of Energy.

The U.S. Department of Energy's Office of Science manages the NSB and sponsors the NSB finals competition. More information about these events is available on the National Science Bowl® website.