This news release is based on a release issued today by the Yale University news office (http://news.yale.edu/2016/05/31/prospect-experiment-will-search-sterile-neutrinos-thanks-3m-doe-grant). Additional information about the PROSPECT experiment can be found here: http://prospect.yale.edu/.

UPTON, NY – Buoyed by a $3 million federal grant, an experiment led by Yale University with partners from four U.S. Department of Energy (DOE) national laboratories, including Brookhaven National Laboratory, and 10 universities will explore key questions about elusive particles called neutrinos—and potentially improve the way we monitor and safeguard nuclear reactors in the process. 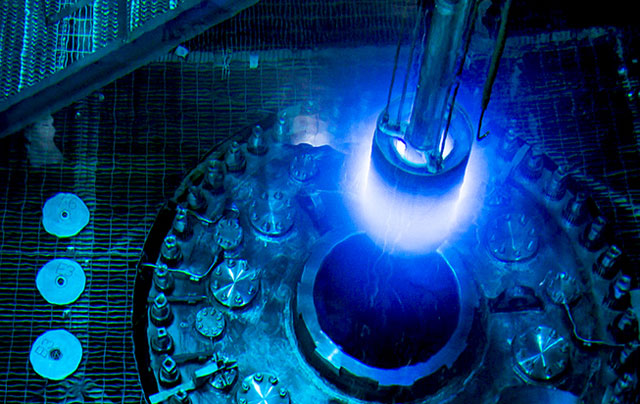 Refueling of the High Flux Isotope Reactor at Oak Ridge National Laboratory (ORNL). Antineutrinos are emitted from the decays of the fission products. (Image by Genevieve Martin/ORNL)

The grant from the DOE Office of Science (HEP) will be used to build a first-of-its-kind, short-distance neutrino detection device for the Precision Oscillation and Spectrum Experiment (PROSPECT). The detection instrument will be constructed at Yale's newly renovated Wright Laboratory and later be deployed at the High Flux Isotope Reactor (HFIR) at Oak Ridge National Laboratory in Tennessee. The PROSPECT experiment has been in development for more than three years.

"It's an excellent marriage of fundamental science and potential applications," said Karsten Heeger, a Yale physicist, director of Wright Lab, and principal investigator for PROSPECT. "We want to better understand the emission of neutrinos from a reactor and study the fundamental properties of elementary particles."

The ability to move the detector to different flight distances will significantly enhance the sensitivity of PROSPECT to possible sterile neutrinos that have been hinted at by previous experiments.

A great deal of scientific research is currently focused on neutrinos, which are subatomic particles that move through the universe with almost no mass and no electrical charge—making them incredibly difficult to detect. Yet their properties and behavior may hold answers to fundamental questions about the nature of matter in the universe.

One such property is oscillation—neutrinos' ability to change among three known types, or "flavors." The discovery of this process, in 1998, was recognized with the 2015 Nobel Prize in physics and the 2016 Breakthrough Prize. Part of its significance comes from the glimpse it gives scientists into the possible existence of matter beyond the parameters of the Standard Model of Particle Physics.

One way scientists are studying neutrino oscillation is by detecting neutrinos created within nuclear reactors, such as the Daya Bay Nuclear Power Plant in China. The Daya Bay experiment recently found that fewer neutrinos were being emitted than physicists had predicted. PROSPECT, by moving closer to a reactor core, will try to find out if the deficit is real or a result of the calculation.

"By going very close to a research reactor—less than 10 meters from the reactor core—PROSPECT will have unparalleled sensitivity to study the energy distribution of neutrinos as they leave the reactor," Heeger said.

One explanation for the apparent neutrino deficit is the possible existence of a fourth type of neutrino known as a "sterile" neutrino. The interplay of the three known neutrino types and a sterile neutrino could result in a unique oscillatory pattern in the observed rate of neutrinos in the PROSPECT detector. Sterile neutrinos would represent a new form of matter.

Yet the apparent deficit might also be explained by shortcomings in the model used to predict reactor neutrino abundances.  For example, the fission cross-sections that lead to neutrino emission may not be that well known.  A major goal of PROSPECT moving forward will be to probe these questions further.

"Previous neutrino detectors have gone deep underground, to reduce backgrounds," said PROSPECT co-spokesperson H. Pieter Mumm, of the National Institute of Standards and Technology (NIST). "PROSPECT will, for the first time, make a precision measurement of reactor antineutrinos with a detector operating at the Earth's surface, something never before accomplished. Such a demonstration could open up new opportunities for neutrino physics and nuclear safeguards." 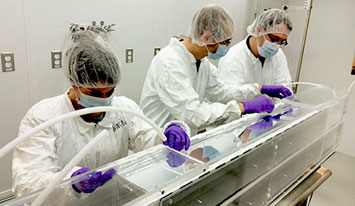 PROSPECT developed a detector capable of surface operation to be able to perform the experiment at the existing reactor facility at Oak Ridge. Successful operation of a relatively compact neutrino detector on the surface would demonstrate a way to remotely monitor nuclear reactors via the detected neutrino flux.

"PROSPECT represents almost four years of dedicated research and development by our team of national laboratories and universities," said Nathaniel Bowden, co-spokesperson for PROSPECT and a physicist at Lawrence Livermore National Laboratory.

Brookhaven Lab chemists Minfang Yeh and Richard Rosero, working with scientists at NIST, have been involved in developing the liquid scintillator—a material that emits light in response to interactions with subatomic particles—that will fill the PROSPECT detector.  This liquid contains an isotope  of lithium that exists in relatively low abundance in nature and is readily able to absorb neutrons produced by the antineutrino interaction.  This excited lithium nucleus then decays to additional products that produce a unique signature in the scintillator, allowing scientists to tease out the signals produced by neutrinos from background particles entering the detector.

"We were able to produce liquid scintillator containing enriched lithium, something that has not been done before, thanks to our extensive experience in scintillator development in neutrino experiments," said Yeh, who leads the neutrino and nuclear chemistry group started by late Brookhaven chemist and Nobel Laureate Raymond Davis, Jr. (Davis received the 2002 Nobel Prize in Physics for the very first radiochemical solar neutrino experiment, which triggered experiments that led to the discovery of neutrino oscillations. This group also contributed to the liquid-filled detectors used by the Sudbury Neutrino Observatory and Daya Bay neutrino experiments.) 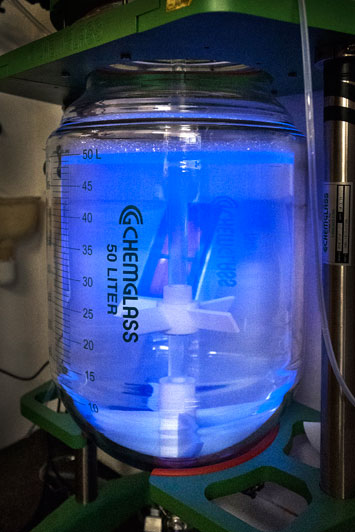 A sample of the lithium-enriched liquid scintillator developed by Brookhaven Lab scientists.

Meanwhile, Brookhaven physicists David Jaffe, Chao Zhang, and Milind Diwan, and engineers Rahul Sharma and Jeffrey Dolph developed a concept for modular, compact shielding for PROSPECT's central detector to reduce background signals created by cosmic rays. The design is based on test shielding the Brookhaven team developed for a prototype detector at HFIR.

Sharma and Dolph also designed a pallet system that uses a thin film of air to reduce friction when the scientists want to move the detector. This low-profile air pallet will allow the scientists to easily vary the detector's distance from the reactor.

"Since neutrino oscillation shows up as a modulation in the neutrino detection rate as a function of neutrino energy and neutrino flight distance, the ability to move the detector to different flight distances will significantly enhance the sensitivity of PROSPECT to possible sterile neutrinos that have been hinted at by previous experiments," Jaffe said.