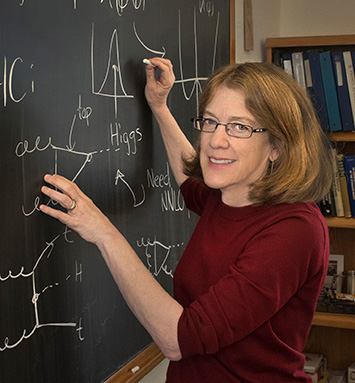 UPTON, NY — Sally Dawson, a theoretical physicist at the U.S. Department of Energy's Brookhaven National Laboratory, has been named a recipient of the 2017 J.J. Sakurai Prize for Theoretical Particle Physics. The award, given by the American Physical Society (APS), recognizes Dawson and her three co-authors of The Higgs Hunter's Guide, a seminal book first published in 1989 on the physics of Higgs bosons—fundamental particles predicted by the accepted theory of particle physics as essential to generating the mass of fundamental particles, and discovered in experiments at the Large Hadron Collider (LHC) in 2012.

"It's a great honor to receive this award with such distinguished scientists," said Dawson. She noted that she was just a postdoc when she first met Haber, recounted early discussions with Kane about the need to catalog what was then known about the Higgs as a way to guide future experiments, and pointed out Gunion's role as the first to calculate one of the signals by which the Higgs was eventually discovered.

"This was all happening around the time the Superconducting Super Collider (SSC), and subsequently the LHC, were first proposed. We've known one another a long time."

It's a great honor to receive this award with such distinguished scientists.

Dawson is best known for developing mathematical models to explain and predict the processes by which Higgs particles are produced. These precise theoretical calculations helped to guide searches for evidence of the Higgs at the LHC, located at the European Centre for Nuclear Research (CERN), which spans the Swiss/French border. The LHC's 2012 discovery of the Higgs contributed to the 2013 Nobel Prize in Physics, which was awarded to the theoretical physicists who predicted the particle's existence nearly fifty years earlier.

"You never would have found the Higgs if you didn't know what you were looking for," Dawson explained to further highlight the importance of the theory work. "The searches were based on years of calculations and the detectors were designed to find this thing based on that theoretical work, which is still ongoing," Dawson said.

Today, Dawson and her colleagues are collaborating to more accurately predict the production and decay processes for Higgs particles at the LHC.

"You can calculate things now that you could never imagine calculating 20 years ago," she said. "People have developed new ways of calculating. It's not just brute force. We are smarter and have more tools now," she added.

Comparing experimental measurements with predictions calculated using different theoretical assumptions gives scientists a way to check the accuracy of their theories—including the long-standing Standard Model, which has, so far, been successful in describing all known particles and their interactions.

Dawson is particularly interested in exploring the interactions of Higgs particles produced in pairs.

"If the Standard Model is correct, we can predict these interactions, but we need to be able to test them," she said. "If the predictions don't come out as expected, the mechanism that gives other particles their mass is not the whole story. And that would be very, very interesting," she said.

To accumulate enough events to be able to do these analyses, the LHC will run through 2035. But Dawson noted that to finish the story, and really be able to measure all the properties of the Higgs, "we are going to need an even higher energy machine."

Dawson joined Brookhaven Lab's Physics Department in 1986 after earning a B.S. in physics and mathematics from Duke University in 1977 and a Ph.D. in physics from Harvard University in 1981. She was a research associate at Fermilab from 1981 to 1983 and Lawrence Berkeley National Laboratory from 1983 to 1986. After arriving at Brookhaven Lab, Dawson rose through the ranks, leading the High Energy Theory Group from 1998 to 2004 and the Physics Department as chair from 2005 to 2007 before returning to research in 2008. She has also been an adjunct professor at Stony Brook University's Yang Institute for Theoretical Physics since 2001. Additional honors include being named a fellow of the American Physical Society in 1995 and the American Association for the Advancement of Science in 2006, and a recipient of the prestigious Humboldt Research Award in 2015.

The J.J. Sakurai Prize was endowed by the family and friends of physicist Jun Sakurai, a well-known contributor in the field of quantum mechanics and particle physics, to encourage outstanding work in the field of particle theory. The award is given annually.

Dawson's research at Brookhaven is supported by the DOE Office of Science.