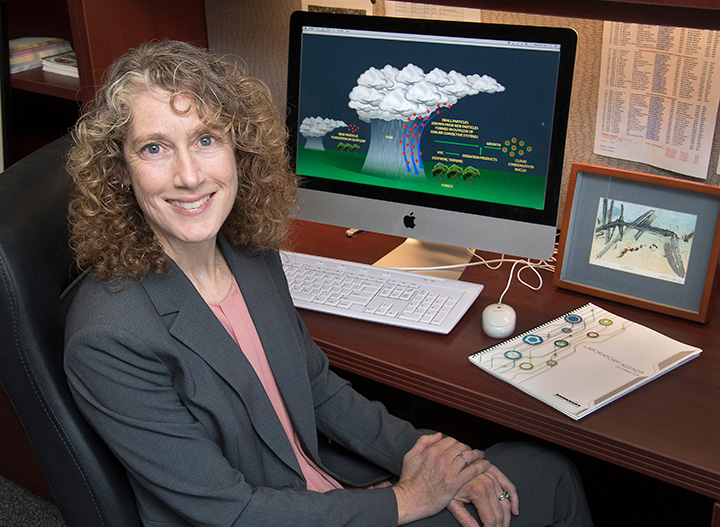 UPTON, NY—Alice Cialella, interim chair of the Environmental and Climate Sciences Department at the U.S. Department of Energy's (DOE) Brookhaven National Laboratory, has been named department chair, effective October 1, 2016. She succeeds Martin Schoonen, who was named associate laboratory director for the Environment, Biology, Nuclear Science, and Nonproliferation Directorate at Brookhaven Lab in August 2014.

Cialella has worked in many capacities as a liaison between scientific researchers and infrastructure activities of the DOE Atmospheric Radiation Measurement (ARM) Climate Research Facility. Scientists use the ARM Facility to obtain measurements of cloud and aerosol properties, precipitation interactions, radiative fluxes, and related atmospheric information that is key to developing models and projections of Earth's climate systems.

"I am honored to have the opportunity to lead such a diverse department, with staff expertise in everything from aerosol chemistry and cloud processes to terrestrial ecosystem science and technology," said Cialella. "With more than 20 years of experience with the ARM Climate Research Facility—which currently provides the largest percentage of the department's funding—I look forward to applying my unique perspective to this position."

For the ARM Facility, Cialella has developed software to automate the process of publishing data, created an interactive map of the data-collection sites, and oversaw the development of metadata collection tools to make the data accessible to scientific users. She is a member of ARM's Architecture and Services Systems Group, and has served on ARM's Engineering Review Board and Standards Committee.

Cialella was appointed interim chair of the Environmental and Climate Sciences Department in October 2015. While serving as interim chair, Cialella continued her 2011 appointment to lead the department's Data Management and Software Engineering Group, which manages the ARM External Data Center. This center imports, archives, and provides scientists with data from sources outside of the ARM Climate Research Facility, such as satellite data from the National Oceanic and Atmospheric Administration.

Cialella first joined the department in 1995 as an advanced applications engineer. Prior to working at Brookhaven, Cialella held various computer software and data analyst roles, including those at a consulting company for the Environmental Protection Agency, the University of New Hampshire's Complex Systems Research Center, and Data Systems Analysts (DSA).

"Alice is a consensus builder with strong management skills. As interim chair, Alice grew the department significantly, and I look forward to working with her in her new role as chair to continue expanding the department," said Schoonen.

As chair, Cialella is excited about presenting the science taking place in the department to stakeholders, seeking new research funding opportunities and sponsors, and identifying future department leaders.

Cialella received her MA in physical geography from the University of Maryland, College Park, and completed additional graduate coursework at the University of New Hampshire Institute for the Study of Earth, Oceans, and Space. She holds a BA in psychology with a concentration in computer science from Western Maryland College (now McDaniel College).