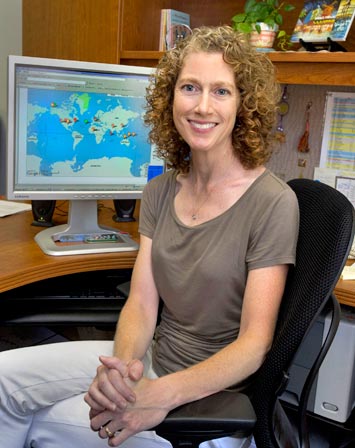 Brookhaven Lab's Alice Cialella, who with her team keeps track of data climate scientists use to accurately forecast what Earth's climate will be like years from now.

Rising sea levels, more frequent heat waves, and heavy precipitation are just some of the effects associated with climate change. But how can scientists accurately forecast what Earth's climate will be like years in advance?

For more than twenty years, the U.S. Department of Energy's Atmospheric Radiation Measurement (ARM) Climate Research Facility has provided scientists with data sets that are critical for climate research. With collaborators at Brookhaven and eight other national labs and additional government agencies and private organizations, scientists use powerful computers and terabytes of data collected at ARM sites around the world to develop models and projections of Earth's complex climate systems. As leader of Brookhaven Lab’s Data Management and Software Engineering Group and ARM’s External Data Center, Alice Cialella and her group keep track of the data climate scientists need and make sure they can find it.

"The scientists I work with pull together measurements of everything from cloud types and water content to quantities of aerosol particles, moisture, and electromagnetic energy in the atmosphere," Cialella said. "Regardless of what was measured where, data are data. I help make it accessible and 'discoverable.'"

ARM obtains lots of data through its facilities and equipment positioned on land, over oceans, and in the atmosphere. These data sets are stored at the ARM Data Archive at Oak Ridge National Laboratory and are freely available to anyone. Still, the challenges of climate science are grand, so scientists also rely on measurements collected by outside organizations such as the National Oceanic and Atmospheric Administration; the European Center for Medium-Range Weather Forecasting, which is based in the United Kingdom; and U.S. universities. The ARM External Data Center that Cialella manages at Brookhaven imports, archives, and provides scientists those complementary data sets.

"If one team of scientists launches weather balloons and the data they collect are made available from the External Data Center, other scientists don't have to spend their own resources to collect those same measurements. This saves them time, energy, and money," Cialella explained.

"And even though instrumentation tethered to weather balloons and other research tools record measurements in lots of different formats, we take data in whatever raw format is delivered and engineer ways to convert them into something that fits with ARM's data archive," she added.

Sometimes new measurements for a particular data set in the External Data Center become available daily or monthly. Other times, data pours in from intensive three- to four-week-long field campaigns. Regardless, shepherding data from one location to another requires a lot of preparation, so Cialella manages information and data with the help of her teammates—including computational scientist Rick Wagener and data software engineers Laurie Gregory, Kathy Lazar, Min Liang, Lynn Ma, and Alison Tilp—who are well-versed in programming languages and data analysis tools.

"After we work through the process—identifying who needs what, where the data will come from, how it was recorded, etc.—we write computer software to automate the process of importing, storing, converting, and publishing data so that scientists can access the data they need from wherever they may be located," Cialella said.

In addition to automating the process of publishing data, Cialella has created and maintains an interactive map of ARM data sites, and she has streamlined the process for delivering final data sets. She is also on a board that directs ARM’s engineering tasks, and is a member of the Data Life Cycle Committee that is responsible for a bigger-picture view—the overall process through which ARM data is collected, processed, checked, archived, and delivered, supporting ARM's data infrastructure for initiatives today and in the future.

With a master's degree in physical geography and experience using geographic information systems, Cialella also helps researchers determine suitable locations around the world for new deployments of radar and other data-collecting instrumentation. And since joining Brookhaven Lab in 1995, Cialella has become very familiar with the geography of the Lab's 5,300 acres—not from data-driven computer software, but from years of running and bicycling on site.