A microscopic image of one of the bismuth strontium calcium copper oxide samples the scientists studied using a new high-speed imaging technique. Color changes show changes in sample height and curvature to dramatically reveal the layered structure and flatness of the material.

UPTON, NY—Scientists studying high temperature superconductors—materials that carry electric current with no energy loss when cooled below a certain temperature—have been searching for ways to study in detail the electron interactions thought to drive this promising property. One big challenge is disentangling the many different types of interactions—for example, separating the effects of electrons interacting with one another from those caused by their interactions with the atoms of the material.

Now a group of scientists including physicists at the U.S. Department of Energy's Brookhaven National Laboratory has demonstrated a new laser-driven "stop-action" technique for studying complex electron interactions under dynamic conditions. As described in a paper just published in Nature Communications, they use one very fast, intense "pump" laser to give electrons a blast of energy, and a second "probe" laser to measure the electrons' energy level and direction of movement as they relax back to their normal state.

"By varying the time between the 'pump' and 'probe' laser pulses we can build up a stroboscopic record of what happens—a movie of what this material looks like from rest through the violent interaction to how it settles back down," said Brookhaven physicist Jonathan Rameau, one of the lead authors on the paper. "It's like dropping a bowling ball in a bucket of water to cause a big disruption, and then taking pictures at various times afterward," he explained. 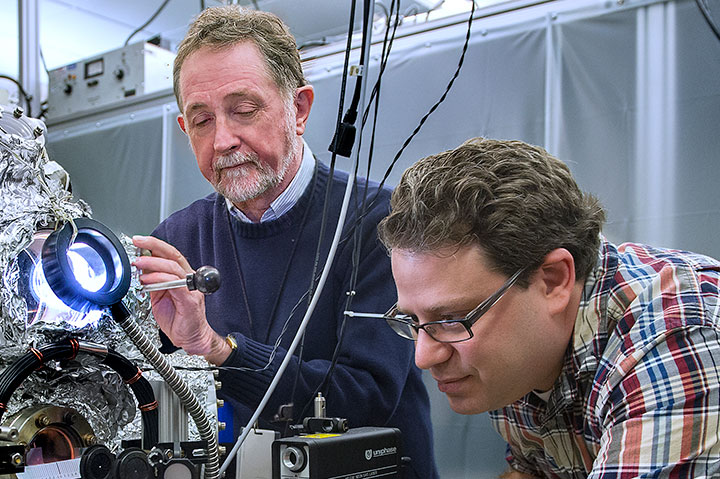 The technique, known as time-resolved, angle-resolved photoelectron spectroscopy (tr-ARPES), combined with complex theoretical simulations and analysis, allowed the team to tease out the sequence and energy "signatures" of different types of electron interactions. They were able to pick out distinct signals of interactions among excited electrons (which happen quickly but don't dissipate much energy), as well as later-stage random interactions between electrons and the atoms that make up the crystal lattice (which generate friction and lead to gradual energy loss in the form of heat).

But they also discovered another, unexpected signal—which they say represents a distinct form of extremely efficient energy loss at a particular energy level and timescale between the other two.

"We see a very strong and peculiar interaction between the excited electrons and the lattice where the electrons are losing most of their energy very rapidly in a coherent, non-random way," Rameau said. At this special energy level, he explained, the electrons appear to be interacting with lattice atoms all vibrating at a particular frequency—like a tuning fork emitting a single note. When all of the electrons that have the energy required for this unique interaction have given up most of their energy, they start to cool down more slowly by hitting atoms more randomly without striking the "resonant" frequency, he said.

The frequency of the special lattice interaction "note" is particularly noteworthy, the scientists say, because its energy level corresponds with a "kink" in the energy signature of the same material in its superconducting state, which was first identified by Brookhaven scientists using a static form of ARPES. Following that discovery, many scientists suggested that the kink might have something to do with the material's ability to become a superconductor, because it is not readily observed above the superconducting temperature.

But the new time-resolved experiments, which were done on the material well above its superconducting temperature, were able to tease out the subtle signal. These new findings indicate that this special condition exists even when the material is not a superconductor.

"We know now that this interaction doesn't just switch on when the material becomes a superconductor; it's actually always there," Rameau said.

The scientists still believe there is something special about the energy level of the unique tuning-fork-like interaction. Other intriguing phenomena have been observed at this same energy level, which Rameau says has been studied in excruciating detail.

It's possible, he says, that the one-note lattice interaction plays a role in superconductivity, but requires some still-to-be-determined additional factor to turn the superconductivity on.

"There is clearly something special about this one note," Rameau said. 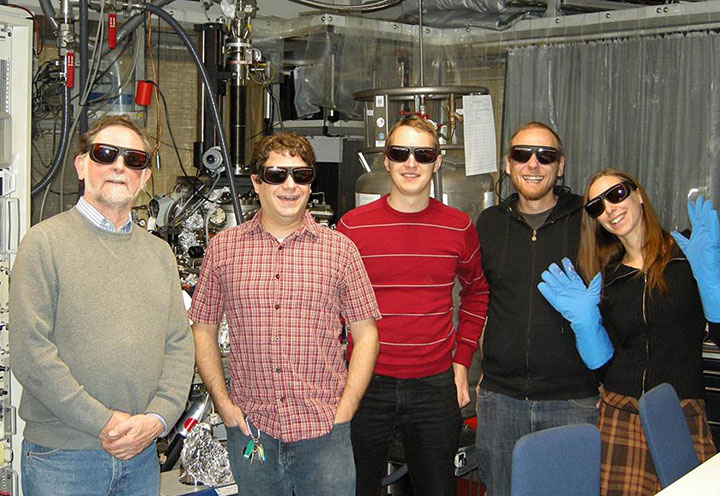 Members of the research team: Peter Johnson and Jonathan Rameau of Brookhaven Lab with Laurenz Rettig, Manuel Ligges, and Isabella Avigo and their time-resolved ARPES experimental setup at the University Duisburg-Essen, Germany.