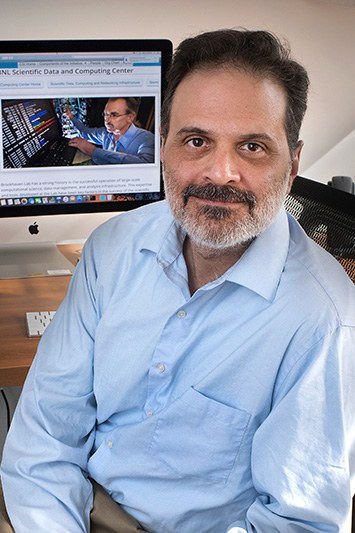 Alexander comes to Brookhaven Lab from DOE’s Los Alamos National Laboratory, where he was the acting division leader of the Computer, Computational, and Statistical Sciences (CCS) Division. During his more than 20 years at Los Alamos, he held several leadership roles, including as leader of the CCS Division’s Information Sciences Group and leader of the Information Science and Technology Institute. Alexander first joined Los Alamos in 1991 as a postdoctoral researcher at the Center for Nonlinear Studies. He returned to Los Alamos in 1998 after doing postdoctoral work at the Institute for Scientific Computing Research at DOE’s Lawrence Livermore National Laboratory and serving as a research assistant professor at Boston University’s Center for Computational Science.

“I was drawn to Brookhaven by the exciting opportunity to strengthen the ties between computational science and the significant experimental facilities—the Relativistic Heavy Ion Collider, the National Synchrotron Light Source II, and the Center for Functional Nanomaterials [all DOE Office of Science User Facilities],” said Alexander. “The challenge of getting the most out of high-throughput and data-rich science experiments is extremely exciting to me. I very much look forward to working with the talented individuals at Brookhaven on a variety of projects, and am grateful for the opportunity to be part of such a respected institution.”

In his new role as deputy director, Alexander will work with CSI Director Kerstin Kleese van Dam to expand CSI’s research portfolio and realize its potential in data-driven discovery. He will serve as the primary liaison to national security agencies, as well as develop strategic partnerships with other national laboratories, universities, and research institutions. His current research interest is the intersection of machine learning and physics (and other domain sciences).

“We are incredibly happy that Frank decided to join our CSI team,” said Kleese van Dam. “With his background in high-performance computing, data science, and computational and statistical physics, he is the ideal fit for Brookhaven.”

Throughout his career, Alexander has worked in a variety of areas, including nonequilibrium physics and computational physics. More recently, he has focused on the optimal design of experiments as part of the joint DOE/National Cancer Institute collaboration on cancer research, as well as on uncertainty quantification and error analysis for the prediction of complex systems’ behavior. Alexander has served on many committees and advisory panels, including those related to DOE’s Laboratory Directed Research and Development program. Currently, he is on DOE’s Computational Research Leadership Council and the editorial board of Computing in Science & Engineering Magazine.