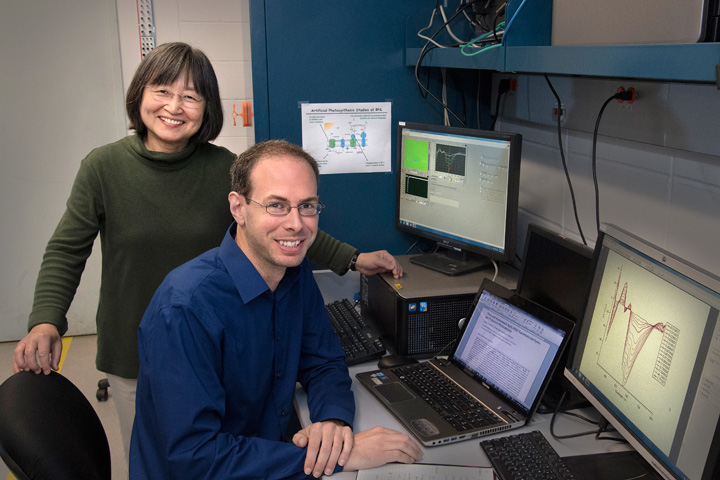 Etsuko Fujita and Gerald Manbeck of Brookhaven Lab's Chemistry Division carried out a series of experiments to understand why their molecular system with six light-absorbing centers (made of ruthenium metal ions bound to organic molecules) produced more hydrogen than the system with three such centers. This understanding is key to designing more efficient molecular complexes for converting solar energy into chemical energy—a conversion that green plants do naturally during photosynthesis.

The leaves of green plants contain hundreds of pigment molecules (chlorophyll and others) that absorb light at particular wavelengths. When light of the proper wavelength strikes one of these molecules, the molecule enters an excited state. Energy from this excited state is shuttled along a chain of pigment molecules until it reaches a specific type of chlorophyll in the photosynthetic reaction center. Here, the energy is used to drive the charge-separation process required for photosynthesis to proceed. The electron “hole” left behind in the chlorophyll molecule is used for water-to-oxygen conversion. Hydrogen ions formed during the water-splitting process are eventually used for the reduction of carbon dioxide to glucose in the second stage of photosynthesis, known as the light-independent reaction.

UPTON, NY—Photosynthesis in green plants converts solar energy to stored chemical energy by transforming atmospheric carbon dioxide and water into sugar molecules that fuel plant growth. Scientists have been trying to artificially replicate this energy conversion process, with the objective of producing environmentally friendly and sustainable fuels, such as hydrogen and methanol. But mimicking key functions of the photosynthetic center, where specialized biomolecules carry out photosynthesis, has proven challenging. Artificial photosynthesis requires designing a molecular system that can absorb light, transport and separate electrical charge, and catalyze fuel-producing reactions—all complicated processes that must operate synchronously to achieve high energy-conversion efficiency.

Now, chemists from the U.S. Department of Energy’s (DOE) Brookhaven National Laboratory and Virginia Tech have designed two photocatalysts (materials that accelerate chemical reactions upon absorbing light) that incorporate individual components specialized for light absorption, charge separation, or catalysis into a single “supramolecule.” In both molecular systems, multiple light-harvesting centers made of ruthenium (Ru) metal ions are connected to a single catalytic center made of rhodium (Rh) metal ions through a bridging molecule that promotes electron transfer from the Ru centers to the Rh catalyst, where hydrogen is produced. 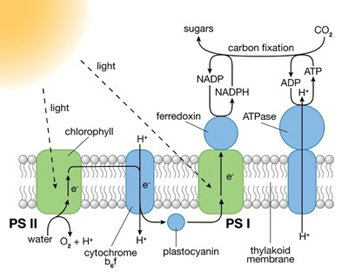 Photosystems (PS) I and II are large protein complexes that contain light-absorbing pigment molecules needed for photosynthesis. PS II captures energy from sunlight to extract electrons from water molecules, splitting water into oxygen and hydrogen ions (H+) and producing chemical energy in the form of ATP. PS I uses those electrons and H+ to reduce NADP+ (an electron-carrier molecule) to NADPH. The chemical energy contained in ATP and NADPH is then used in the light-independent reaction of photosynthesis to convert carbon dioxide to sugars.

They compared the hydrogen-production performance and analyzed the physical properties of the supramolecules, as described in a paper published in the June 1 online edition of Journal of the American Chemical Society, to understand why the photocatalyst with six as opposed to three Ru light absorbers produces more hydrogen and remains stable for a longer period of time.

“Developing efficient molecular systems for hydrogen production is difficult because processes are occurring at different rates,” said lead author Gerald Manbeck, a chemist in the artificial photosynthesis group at Brookhaven Lab. “Completing the catalytic turnover of hydrogen before the separated charges—the negatively charged light-excited electron and positive “hole” left behind after the excited molecule absorbs light energy—have a chance to recombine and wastefully produce heat is one of the major challenges.”

Another complication is that two electrons are needed to produce each hydrogen molecule. For catalysis to happen, the system must be able to hold the first electron long enough for the second to show up. “By building supramolecules with multiple light absorbers that may work independently, we are increasing the probability of using each electron productively and improving the molecules’ ability to function under low light conditions,” said Manbeck.

Manbeck began making the supramolecules at Virginia Tech in 2012 with the late Karen Brewer, coauthor and his postdoctoral advisor. He discovered that the four-metal (tetrametallic) system with three Ru light-absorbing centers and one Rh catalytic center yielded only 40 molecules of hydrogen for every catalyst molecule and ceased functioning after about four hours. In comparison, the seven-metal (heptametallic) system with six Ru centers and one Rh center was more than seven times more efficient, cycling 300 times to produce hydrogen for 10 hours. This great disparity in efficiency and stability was puzzling because the supramolecules contain very similar components.

Manbeck joined Brookhaven in 2013 and has since carried out a series of experiments with coauthor Etsuko Fujita, leader of the artificial photosynthesis group, to understand the fundamental causes for the difference in performance.

“The ability to form the charge-separated state is a partial indicator of whether a supramolecule will be a good photocatalyst, but realizing efficient charge separation requires fine-tuning the energetics of each component,” said Fujita. “To promote catalysis, the Rh catalyst must be low enough in energy to accept the electrons from the Ru light absorbers when the absorbers are exposed to light.” 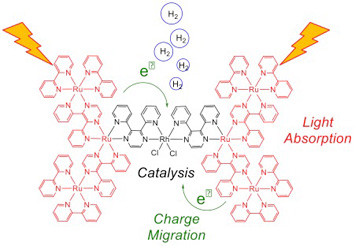 This depiction of the heptametallic system upon exposure to light shows light harvesting by the six Ru centers (red) and electron transfer to the Rh catalyst (black), where hydrogen is produced. Efficient electron transfer to Rh is essential for realizing high catalytic performance.

They verified their hypothesis with a time-resolved technique called nanosecond transient absorption spectroscopy, in which a molecule is promoted to an excited state by an intense laser pulse and the decay of the excited state is measured over time. The resulting spectra revealed the presence of a Ru-to-Rh charge transfer in the heptametallic system only.

“The data not only confirmed our hypothesis but also revealed that the excited-state charge separation occurs much more rapidly than we had imagined,” said Manbeck. “In fact, the charge migration happens faster than the time resolution of our instrument, and probably involves short-lived, high-energy excited states.” The researchers plan to seek a collaborator with faster instrumentation who can measure the exact rate of charge separation to help clarify the mechanism.

In a follow-up experiment, the scientists performed the transient absorption measurement under photocatalytic operating conditions, with a reagent used as the ultimate source of electrons to produce hydrogen (a scalable artificial photosynthesis of hydrogen fuel from water would require replacing the reagent with electrons released during water oxidation). The excited state generated by the laser pulse rapidly accepted an electron from the reagent. They discovered that the added electron resides on Rh in the heptametallic system only, further supporting the charge migration to Rh predicted by cyclic voltammetry.

This research is supported by DOE’s Office of Science.