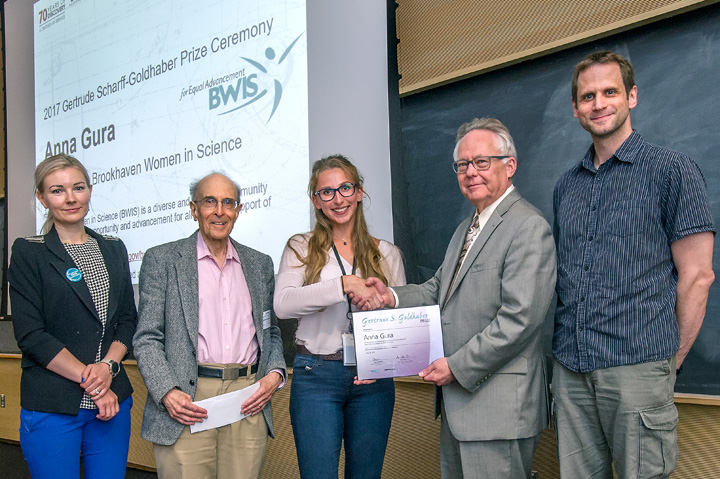 At the Lab’s award ceremony on June 29, Gertrude “Trudy” Goldhaber’s two sons, Michael and Alfred, spoke about their mother’s life. Michael Goldhaber said, “Trudy was a pioneer of female physicists who fought against all odds her whole life,” noting that she was a pioneer in a male-dominated field and had to battle persecution as a Jew in Nazi Germany to earn her Ph.D. in 1936. And then, despite losing her parents in the Holocaust and being forced to seek refuge in the United States, Goldhaber passionately continued her physics research and paved the way for generations of female scientists.

I'm incredibly humbled by the legacy that Dr. Goldhaber left behind and am honored to win this prize in her memory.

To honor her contributions to Brookhaven Lab and to the world, BWIS established the Gertrude Scharff-Goldhaber Prize in 1992. With the award now in its 25th year, Anna Gura joins a legacy of accomplished female physicists who followed in Goldhaber’s footsteps—more than three-quarters of the previous awardees have careers in academia, with over half in tenure-track positions. Gura says she is “incredibly humbled by the legacy that Dr. Goldhaber left behind and [is] honored to win this prize in her memory.”

At the ceremony, Gura presented her most recent research. Her work focuses on ferroelectrics, materials whose polarization, or alignment of charges, can be changed with an electric field. By layering these materials into “superlattices,” portions of the new material’s surface can be polarized in one direction, “up,” at the same time that other parts are polarized “down.” Gura studies how to best deposit graphene, a two-dimensional conductive form of carbon, onto the surface of these superlattices so that she can build miniscule electrical circuits. Her research—which makes use of Brookhaven Lab’s National Synchrotron Light Source II (NSLS-II) and Center for Functional Nanomaterials (CFN), two DOE Office of Science User Facilities—may push these materials toward applications in nanoscale information storage and flexible electronics, similar to those in bendable computer keyboards.

Goldhaber’s son Michael noted Gura’s talk on ferroelectrics seemed particularly fitting since her Ph.D. research focused on a related topic, ferromagnetism. He said that Gura was “a very gifted speaker and a very appropriate person to receive the 25th annual prize.”

Anna Gura received a B.S. in physics and a B.A. in mathematics from Lehman College and intends to finish her Ph.D. at Stony Brook this coming year.

Operations at NSLS-II and CFN are funded by the DOE Office of Science.