Recognition honors her lifetime of contributions to experimental nuclear physics 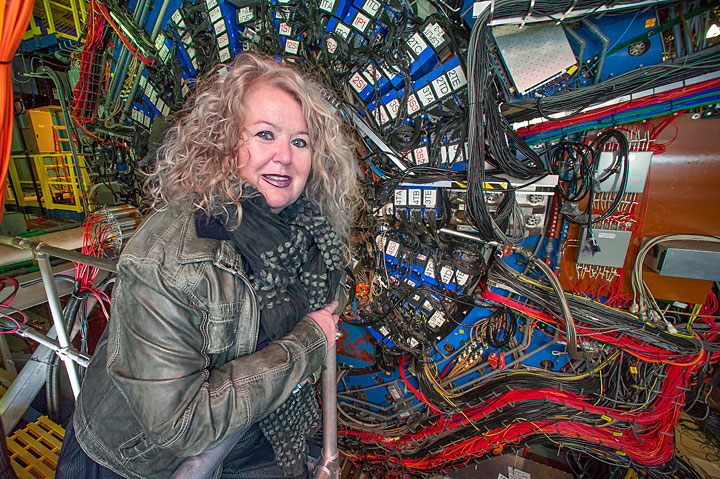 Elke-Caroline Aschenauer, widely recognized for helping to design and lead experiments in nuclear physics, at the STAR detector of the Relativistic Heavy Ion Collider (RHIC), a particle collider that explores the particles and forces that form the bulk of visible matter in the universe.

UPTON, NY — Elke-Caroline Aschenauer, a senior physicist at the U.S. Department of Energy's Brookhaven National Laboratory, has been awarded a Humboldt Research Award for her contributions to the field of experimental nuclear physics. This prestigious international award—issued by the Alexander von Humboldt Foundation in Bonn, Germany—comes with a prize of €60,000 (more than $70,000 U.S.) and the opportunity to spend up to one year in Germany (not necessarily continuously) to collaborate with researchers at universities and research organizations there.

“I am very happy to receive this recognition of my work—the many hours sitting in control rooms, taking data, writing code, and much more,” Aschenauer said. “And I am grateful for the opportunity to have extended stays in Germany to work again with colleagues who are not only colleagues but also friends—some of them I have known since we were finishing our Ph.D.s!”

These relationships, she said, will help to foster or strengthen collaborations among European and U.S. physicists addressing some of the major research aims at Brookhaven Lab’s Relativistic Heavy Ion Collider (RHIC)—a DOE Office of Science user facility for nuclear physics research—as well as among those hoping to build a U.S.-based Electron-Ion Collider (EIC), a proposed facility for which Aschenauer has been a strong proponent.

“This opportunity will in many ways help us to be in contact with many experts in the field in Germany and the rest of Europe, and it will help promote the EIC and the Cold QCD Physics program at RHIC,” she said.

QCD, or Quantum Chromodynamics, is the theory that describes how the strong nuclear force binds the fundamental building blocks of visible matter—the stuff that makes up everything we see in the universe, from stars, to planets, to people. RHIC explores QCD by colliding protons, heavy ions, and protons with heavy ions, sometimes recreating the extreme heat and pressure that existed in the early universe, and sometimes using one particle to probe the structure of another nucleus without heating it up (that is, in its “cold” initial state). By giving scientists a deeper understanding of QCD and the strong nuclear force, these experiments will help elucidate how matter is constructed from the smallest scales imaginable to the large-scale structure of the universe today.

Aschenauer is widely recognized for helping to design and lead various experiments that have explored these fundamental questions, particularly the internal structure of the protons and neutrons that make up atomic nuclei. At Germany’s Deutsches Elektronen-Synchrotron (DESY) laboratory, she was involved in the HERMES experiment taking snapshots of the inside of protons. This experiment revealed the first information about the three-dimensional distribution of smaller building blocks called “quarks,” which are held together inside protons by glue-like “gluons,” carriers of the strong nuclear force. She also helped devise ways to measure how these smaller building blocks contribute to the overall “spin” of protons.

She continued her explorations of nuclear structure at Thomas Jefferson National Accelerator Facility (Jefferson Lab), leading a new experiment for studying gluon structure through the design and approval stages. Since 2009, she has been the leader of the medium-energy physics group at Brookhaven National Laboratory, designing detector components and new measurement techniques for experiments at RHIC.

I like the combination between coming up with an idea—how to measure something—and helping to build a detector or system to make that measurement.

In addition to using particle collisions to recreate the conditions of the early universe, RHIC is also the world’s only polarized proton collider for spin physics studies. Spin, or more precisely, intrinsic angular momentum, is a fundamental property of subatomic particles that is somewhat analogous to the spinning of a toy top with a particular orientation. A particle’s spin influences its optical, electrical, and magnetic characteristics; it is essential to technologies such as magnetic resonance imaging (MRI), for example. Yet the origin of spin in a composite particle such as the proton is still not well understood. Experiments in the 1980s revealed that the spins of a proton’s three main constituent quarks account for only about a third of the overall proton spin, setting off a “crisis” among physicists and a worldwide quest to measure other sources of proton spin.

Aschenauer has been at the forefront of this effort, bringing both an understanding of the underlying theory and designing and performing cutting-edge experiments to explore spin, both in Germany and the U.S. At RHIC, these experiments have revealed an important role for gluons, possibly equal to or more significant than that of the quarks, in establishing proton spin. As an advocate for a future Electron-Ion Collider, Aschenauer has been instrumental in establishing how this machine could be used to make additional measurements to resolve the inner structure of protons, and is helping to translate those ideas into designs for the detector and interaction region that will achieve this goal at an EIC.

Aschenauer together with members of her group also developed an innovative way to use spin as a tool for probing the “color” interactions among quarks in a way that tests a theoretical concept of nature’s strongest force and paves a way toward mapping protons’ 3D internal structure. This work established the science case for the key measurements taken during the polarized proton run at RHIC in 2017, and also lays the foundation for future experiments at a proposed EIC.

As noted by Andreas Schäfer of Germany’s University of Regensburg, who nominated Aschenauer for this honor and will serve as her German host, both the “hot” and “cold” QCD communities of physicists support the EIC thanks in large part to the efforts of Aschenauer and her colleagues to showcase the science that could be achieved at such a machine. He noted that the EIC could also have relevance to the physics program at Europe’s Large Hadron Collider (LHC) and possible future European colliders.

“All European Electron-Ion Collider User Group members would profit from Aschenauer being in Germany for a longer stretch of time,” Schäfer said. “While Regensburg would be the host university, Aschenauer would spend much of her time meeting with other European groups of experimentalists as well as theoreticians,” he added.

Aschenauer really enjoys this interplay of experiment and theory and turning ideas into experimental reality.

“I like the combination between coming up with an idea—how to measure something—and helping to build a detector or system to make that measurement. I find that a very interesting challenge. And then also, once you have done that, you get to analyze the data to get a result that pushes the field forward with new knowledge,” she said.

“I was fortunate to be involved in a lot of innovative measurements in Germany, which then led to follow-up experiments at Jefferson Lab and at RHIC, where we do things with different methods. The opportunities made possible by this award, particularly the chance to work closely with colleagues in Germany, will help build on those earlier experiences and help us refine how we might pursue these ideas further at a future EIC.”

Berndt Mueller, Brookhaven Lab’s Associate Laboratory Director for Nuclear and Particle Physics, noted, “Elke has been one of the driving forces of the RHIC Spin program over the past decade, which culminated in the discovery that gluons are major contributors to the spin of the proton. In addition, she has established herself as one of the global leaders developing the science program of a proposed future Electron-Ion Collider. The Humboldt Research Award recognizes her outsized contributions to the science of nucleon structure.”

Aschenauer earned a Ph.D. in physics from the Swiss Federal Institute of Technology (ETH) Zürich in 1994, then accepted a personal postdoctoral fellowship from the European Union to work at the Dutch National Institute for Subatomic Physics and the University of Ghent in Belgium. She joined DESY in Germany as a postdoc in 1997, beginning her research on proton spin at the HERMES experiment, and became a staff scientist there in 2001. After being part of a team that built the ring-imaging Cherenkov (RICH) detector for HERMES, she spent three years as Deputy Spokesperson and Run Coordinator, and then 3.5 years as the spokesperson of the HERMES experiment. In 2006, she moved to Jefferson Lab and was the group leader of the Hall D scientific and technical staff and project leader for the Hall D contribution to the 12 GeV Upgrade Project. She joined Brookhaven as a staff scientist in 2009, received tenure in 2010, and was named a Fellow of the American Physical Society in 2013.