A View of the Colorful Microcosm Within a Proton 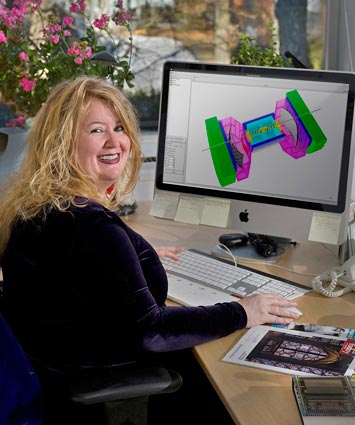 Brookhaven physicist Elke Aschenauer, a member of the STAR collaboration.

UPTON, NY—The proton sounds like a simple object, but it's not. Inside, there's a teeming microcosm of quarks and gluons with properties such as spin and "color" charge that contribute to the particle's seemingly simplistic role as a building block of visible matter. By analyzing the particle debris emitted from collisions of polarized protons at the Relativistic Heavy Ion Collider (RHIC), scientists say they've found a new way to glimpse that internal microcosm. They've measured a key effect of the so-called color interaction—the basis for the strong nuclear force that binds quarks within the proton. This new measurement tests, for the first time, theoretical concepts that are essential for mapping the proton's three-dimensional internal structure.

The research, described in a paper to be published as an Editor's Suggestion in Physical Review Letters, is only possible at RHIC, a 2.4-mile circular particle collider that operates as a U.S. Department of Energy (DOE) Office of Science User Facility for nuclear physics research at DOE's Brookhaven National Laboratory. RHIC is unique in that it uses specialized magnets to strategically align the spins of billions of tiny protons so they are mostly pointing in a particular direction as they circulate and collide.

"In this experiment, [RHIC's] polarization gives scientists a unique way to understand hard-to-catch details of how the 'color' charges of quarks and gluons affect their microcosmic interactions."

This adjustable polarization is essential for teasing out details of the particles' internal structure, including how their constituent quarks and glue-like binding particles called gluons contribute to the protons' overall spin, and how these particles interact.

"In this experiment, the polarization gives scientists a unique way to understand hard-to-catch details of how the 'color' charges of quarks and gluons affect their microcosmic interactions," explained Brookhaven physicist Elke Aschenauer, a member of the scientific collaboration using RHIC's STAR detector to analyze the subatomic smashups.

If you've ever seen the colorful images of particle tracks emerging from collisions at STAR, you might wonder what all the fuss over "color" is about. STAR has been producing these firework-like displays since RHIC started operating in June 2000. The colors of those tracks help identify the types of particles emerging from RHIC collisions. But the "color" of the quarks that make up the colliding ions is a rather different concept. It's a type of charge that borrows a naming convention from our understanding of visible light because it comes in three forms that must be combined to form a neutral state—similar to the way the three primary colors of light (red, green, and blue) combine to form "neutral" white light. 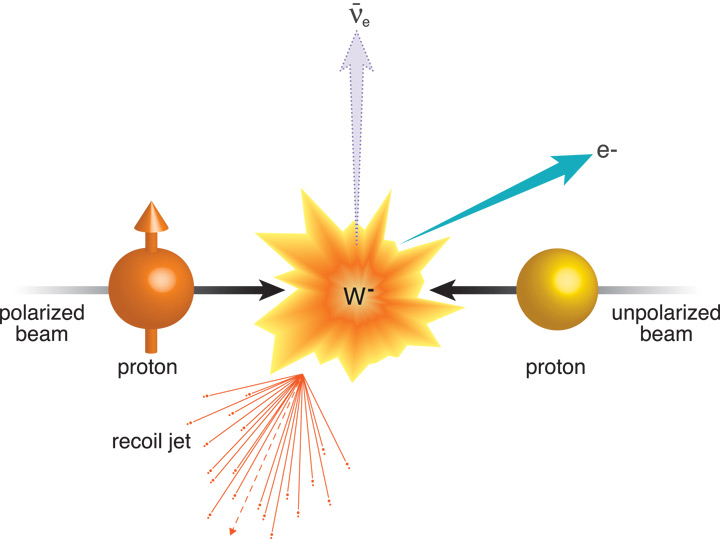 RHIC physicists used collisions of protons with their spins aligned transverse (perpendicular) to their direction of motion (left) with an unpolarized proton beam (right) to search for the effects of the interaction between "like" color charges. They were looking for a lopsided production of particles called W bosons, but in the opposite direction to that observed by experiments measuring the effects of "unlike" color interactions. The scientists can't measure W particles directly because they decay quickly, in the case shown, into an electron (e) and a neutrino (ν)—another notoriously difficult-to-detect particle. Instead they track a jet of particles that recoil in the opposite direction as the neutrino disappears, and add their energy to the energy of the electron to reconstruct each W. So far these experiments at RHIC's STAR detector reveal a hint of this effect of the repulsive color interaction—a hint physicists hope to nail with future experiments.

As is the case with more-familiar positive and negative electric charges, in color charge, opposites attract and like charges repel.

"To get neutral (white) you need all three colors. So the opposite of each individual color charge is the other two combined," Aschenauer said.

The need for three differently colored quarks to combine is the defining property of the strong nuclear force—which makes it impossible for quarks to be free, and ultimately binds protons and neutrons to form the atoms of visible matter. While several experiments have sought to measure the effects of the attractive interaction that binds "unlike" color charges, scientists have now, for the first time, measured an effect of the repulsive color interaction when "like" color charges meet up in particle collisions at RHIC. 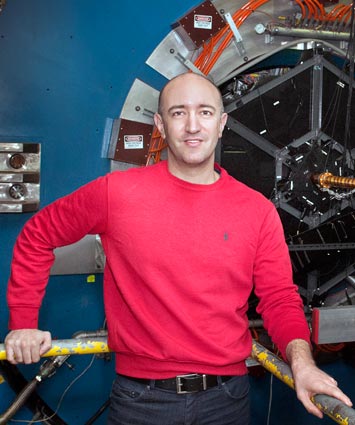 Brookhaven Lab/STAR physicist Salvatore Fazio, who led the analysis of these results

Probing the effects of color charge interactions in particle collisions at STAR is no easy task. As STAR collaborator Salvatore Fazio explained, the RHIC physicists do it by measuring the number, trajectory, and energy level of particles called W bosons that emerge from RHIC's collisions of polarized protons. But Ws decay in a flash—into an electron, which is fairly easy to pick up, and a neutrino, a notoriously elusive particle that quickly escapes. To get a read on the neutrino's energy, the scientists must detect all the particles that recoil in the opposite direction from the escaping neutrino—then add all that together with the energy of the electron to get the information they need about each W.

This reconstruction of a particle from a jet-like spray of debris requires a big detector with a very large acceptance—the ability to track a wide variety of particles over a very large area. In other words, you need STAR, a tracking detector that, like a giant barrel, covers the region around the point where the beams collide and is capable of catching thousands of particle sprays per second.

"The details about this measurement are very technical," Fazio said, "but counting up all the Ws can point to something called a 'single transverse spin asymmetry'—an imbalance in the number of these particles emerging to one side of the detector compared to the other depending on where the spin of the proton is pointing." This measurement is a big step toward verifying a long-standing theoretical prediction based on insights into the workings of the color interaction.

As Aschenauer pointed out, "There are a lot of initiatives in the world to measure this asymmetry in electron- or muon-proton collisions, using fixed targets at other facilities such as COMPASS, HERMES, and Thomas Jefferson National Accelerator Facility. But all the measurements from those experiments reflect the effects of the attractive force between 'unlike' color charges. The only way to test the theory of the color interaction being in one case attractive and in the other repulsive is to have an observable that is driven by the repulsive interaction between 'like' color charges—which is what we were able to test with polarized proton-proton collisions at RHIC." 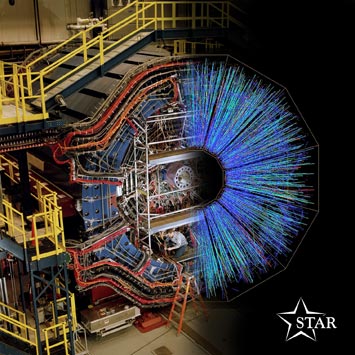 The STAR detector at the Relativistic Heavy Ion Collider tracks thousands of particles produced in collisions of heavy ions such as gold, as shown in the colorful particle tracks on the righthand side of the image. In collisions of polarized protons at RHIC, STAR is also seeing hints of an effect of a different kind of color—the "color" charges of the quarks that make up the colliding protons.

The hypothesis was that the RHIC experiment would produce the same spatial imbalance in W production, but in the opposite direction as seen in the experiments sensitive to the interactions of "unlike" color charges. The experimental test of this "sign change" is one of the open questions in hadronic physics and was recently noted as a priority by the nation's Nuclear Science Advisory Committee (NSAC).

Even after conducting these studies for a relatively short time as a way to prove the concept, the STAR team says they've seen a hint of the sign change, but more data are needed to be sure.

"Because it is such a complicated measurement, we initially did not dedicate an entire run to this. But now we do have a hint we want to pursue," Fazio said. The team hopes to nail the case in the RHIC run of 2017, which for STAR, will be dedicated to this measurement.

In addition, because these new findings align with the theory scientists have been using to describe the inner structure of the proton, they also support their plan to use future collisions of electrons with polarized protons at a proposed electron ion collider (EIC) to conduct detailed studies of the internal structure of the proton.

"These STAR measurements give an indication of the internal momentum of quarks and gluons, both in the direction of motion but also transverse momentum. An EIC would unravel all the necessary details to produce 3D pictures of the proton's momentum structure," Aschenauer said.

Research at RHIC is supported primarily by the DOE Office of Science (NP) and by these agencies and organizations.