The following news release about developing capabilities for remotely monitoring nuclear reactors was issued by the U.S. Department of Energy’s (DOE) Lawrence Livermore National Laboratory. The work is part of an international collaboration for nonproliferation research aimed at developing capabilities to track the production of fissile materials that can be used in nuclear weapons. Scientists from DOE’s Brookhaven National Laboratory played an important role in guiding the design of a demonstration detector known as WATCHMAN, which will be tested for its ability to pick up signals of antineutrinos produced from an operating reactor from significant distances. WATCHMAN builds on experience gained from building previous antineutrino detectors for various physics experiments funded by the DOE Office of Science. The Brookhaven scientists involved in this work are developing a new type of water-based liquid scintillator that could significantly enhance the sensitivity of WATCHMAN to reactor antineutrinos. For more information about Brookhaven Lab’s role in this research, contact: Karen McNulty Walsh, kmcnulty@bnl.gov, 631-344-8350. 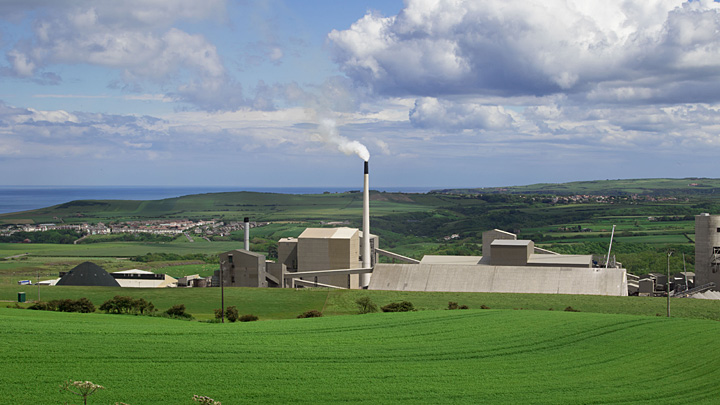 Boulby potash, polyhalite and salt mine on the northeast coast of England is Great Britain's deepest mine and the home of the Science and Technology Facilities Council's Boulby Underground Laboratory. The mine, operated by ICL-UK /Cleveland Potash Ltd, is expected to be the site of the Advanced Instrumentation Testbed project, a new international multi-laboratory and university collaboration for nonproliferation research. The WATCHMAN detector would be placed in an excavated cavern at the Boulby site and is slated to become operational in approximately 2023.

The program will support the development of detection hardware and algorithms to enable improved nonproliferation detector capabilities for remote monitoring of nuclear reactors.

The initiative, known as the Advanced Instrumentation Testbed (AIT), is sponsored by the Department of Energy’s National Nuclear Security Administration (NNSA).

The AIT will be built and operated as part of an ongoing nonproliferation research collaboration between United States and United Kingdom national laboratories and universities.

“Fission in nuclear reactors generates heat, which is used to pressurize or boil water to turn turbines for electricity generation,” said LLNL physicist and AIT principal investigator Adam Bernstein. “Our goal is to harness a largely neglected aspect of the fission process for practical purposes.

“This very same fission process results in the emission of enormous numbers of highly penetrating particles known as antineutrinos. In our testbed, we will demonstrate the capability to detect the operations of nuclear reactors at significant distances, using antineutrino emissions.

“One of the key components of the testbed, the WATCHMAN antineutrino detector, will perform reactor monitoring at about 25 kilometers. This demonstration will lay the groundwork for larger detectors that would be required to monitor or discover small reactors at distances of up to several hundred kilometers,” Bernstein noted. (WATCHMAN is an acronym for the WATer CHerenkov Monitor of ANtineutrinos.)

As a result, they can travel through enormous amounts of material, well over a light year (9 trillion kilometers) of solid lead, without slowing down or stopping.

“Since their Nobel-prize winning discovery by Clyde Cowan and Frederick Reines using a reactor source in the late 1950’s, scientists have spent more than 60 years exploring the curious properties of neutrinos,” said the project’s co-spokesman, Professor Mark Vagins of the University of California, Irvine. “With WATCHMAN, we’ll have a chance to show how these fascinating particles can be put to work for a very practical purpose.”

Subject to final approval by contributing stakeholders, including the mine authorities, the AIT will be constructed at the site of the Boulby Underground Laboratory, an existing U.K.-government-funded deep underground science facility operating in a working potash, polyhalite and salt mine (Boulby Mine) located on the northeast coast of England.

The WATCHMAN detector will be placed in an excavated cavern at the Boulby site and is slated to become operational in approximately 2023. It would be roughly 16 meters tall and 16 meters in diameter. The Boulby Underground Laboratory is located 1,100 meters below ground. 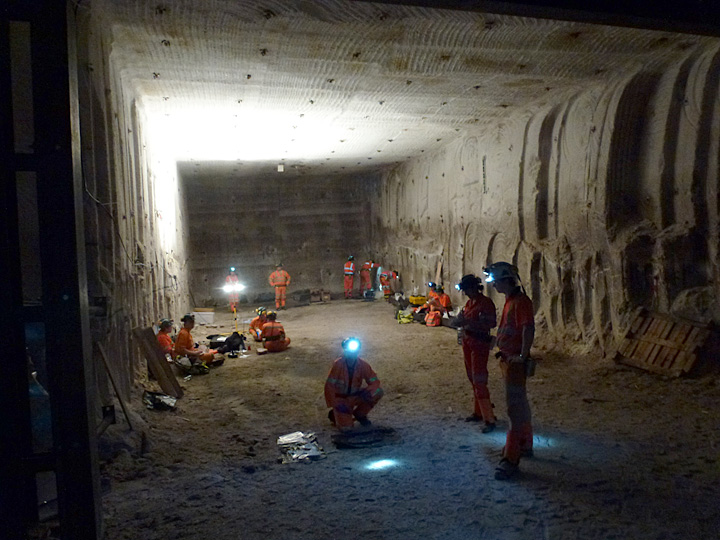 The existing Science and Technology Facilities Council's Boulby Underground Laboratory, at a depth of 1,100 meters at Boulby mine already hosts a range of deep underground science studies from astrophysics (the search for dark matter in the universe) to studies of geology, geophysics, climate, the environment, life in extreme in environments on earth and beyond. The mine, operated by ICL-UK /Cleveland Potash Ltd, is expected to be the site of the Advanced Instrumentation Testbed project, a new international multi-laboratory and university collaboration for nonproliferation research. The WATCHMAN detector would be placed in an excavated cavern at the Boulby site and is slated to become operational in approximately 2023.

The technical goal of WATCHMAN is to detect reactor antineutrinos, and thereby observe reactor operations at a significant distance from a nuclear reactor complex, using a large water-based detector.

Doping the water with trace amounts of the rare earth metal gadolinium, a neutron capture agent, greatly enhances its sensitivity to antineutrinos, which generate neutrons by interacting with protons in the water.

The demonstration consists of observing reactor operations, including turn-on and turn-off of individual reactors at the Hartlepool two-core reactor complex, 25 kilometers distant from the mine, with a 3,500-ton detector.

Monitoring of this type may be of use in present and future cooperative monitoring agreements and treaties in which the goal is to track or restrict the production of fissile materials that can be used in nuclear weapons. 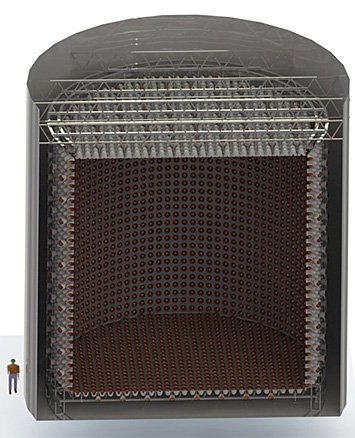 Shown is a cutaway view of the WATCHMAN antineutrino detector, which would be a key part of the Advanced Instrumentation Testbed, a new international multi-laboratory and university collaboration for nonproliferation research. The facility's outer stainless steel tank is approximately 16 meters tall and 16 meters in diameter. It contains some 3,500 metric tons of water. An inner structure of trusses and cables supports about 3000 photomultiplier tubes, powerful light sensing devices that convert Cherenkov light arising from the antineutrino interactions in the water into a succession of electrical pulses that are readily processed by downstream electronics to extract the antineutrino signature. The support structure conceptual design and these drawings were created by Jim Brennan of Sandia National Laboratories, California branch.

WATCHMAN will be the first demonstration of remote monitoring of individual reactor operations at a significant distance, using a scalable water-based technology.

The AIT also will permit deployment of numerous advanced technologies that are relevant for remote reactor monitoring and detection, including water-based liquid scintillators, fast photo-sensors, light concentrators and others.

New methods for improving sensitivity also will be studied with the AIT, including directional suppression of backgrounds, advanced calibration techniques, and sophisticated algorithms and techniques for optimal extraction and utilization of the antineutrino signal.

“It’s a truly remarkable team,” said Vagins, the academic co-spokesman. “The depth and breadth of experience in both nonproliferation studies and neutrino physics is unmatched.”

Building on this work, LLNL has helped to pioneer a successful, and now worldwide, effort to develop relatively small ton-scale antineutrino detectors for monitoring fissile inventories in reactors at roughly 25-meter distances from the reactor core.

The new program is a logical extension of this work, representing a 1000-fold increase in distance compared to LLNL’s previous deployments.

In addition to monitoring reactors from longer distances, more powerful neutrino detectors could help provide researchers with more understanding about how the universe works, in Bernstein’s view.

This graphic shows the detail of a possible configuration of the photomultiplier tube mounting structure for the WATCHMAN antineutrino detector, a key part of the Advanced Instrumentation Testbed, a new international multi-laboratory and university collaboration for nonproliferation research. Modules containing sets of photomultiplier tubes are securely bolted to cables which run the vertical length of the detector – like a giant Christmas decoration that absorbs light rather than emitting it. These drawings were created by Jim Brennan of Sandia National Laboratories, California branch.

“In the long term, WATCHMAN-style water-based detectors can give us new insights into the mysterious properties of neutrinos, and even help us resolve the long-standing mystery of the great disparity between the amount of matter and anti-matter in the universe. WATCHMAN itself, once commissioned, will become one of a small set of large antineutrino detectors worldwide that are capable of detecting antineutrino bursts from supernovas,” he said.

Further, since neutrinos are emitted by the earth itself, detectors like WATCHMAN and its successors may permit the measurement of geo-antineutrinos.

“By measuring geo-antineutrinos, scientists may be able to learn about the total heat output of the earth, as well as study the composition of the earth’s crust and mantle,” Bernstein noted.

“WATCHMAN, and more broadly the AIT, offer examples of the powerful synergy that can be gained when tools developed for basic science are applied in nonproliferation contexts,” Bernstein added.