The following news release was issued by the High Energy Accelerator Research Organization, known as KEK, in Japan, home of the Belle II experiment. The U.S. Department of Energy’s Brookhaven National Laboratory provides the U.S. portion of the computing and data storage required for the Belle II experiment, taking advantage of the excellent capabilities of the Scientific Data Computing Center as demonstrated with the ATLAS and RHIC experiments. Raw data from the Belle II will be transferred, archived, and processed at Brookhaven Lab to enable research by Brookhaven Lab physicists and Belle II collaborators around the world. In addition, Brookhaven Lab's Superconducting Magnet Division built superconducting corrector magnets as part of the SuperKEKB upgrade to enable the improved luminosity. For more information about Brookhaven’s role in this work, contact Karen McNulty Walsh, kmcnulty@bnl.gov, (631) 344-8350. 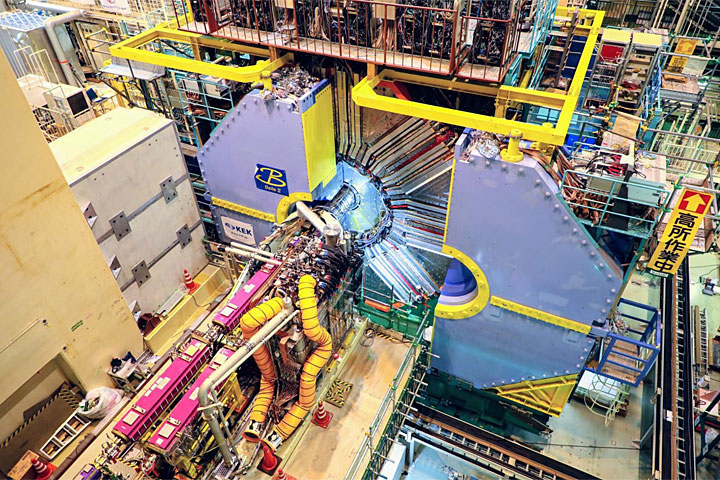 SuperKEKB accelerator and Belle II detector at the interaction region

KEK has begun a new stage of operation of the SuperKEKB electron-positron collider, with a brand new positron damping ring and the Belle II detector. Electron and positron beams will begin colliding soon for the first time in 8 years, since the previous KEKB collider ceased its operations in 2010.

On March 21, 2018, a beam of electrons was successfully stored in the main ring. A beam of positrons will be injected and stored around the beginning of the April, and then final accelerator tuning for beam collisions will begin. The first collisions of electrons and positrons are expected in the coming months.

This is the first step toward the SuperKEKB design luminosity[1], which is a factor of 40 times higher than the current world record set by KEKB.

SuperKEKB, along with the Belle II detector, is a facility designed to search for New Physics beyond the Standard Model by measuring rare decays of elementary particles such as b quarks, c quarks, and tau leptons. 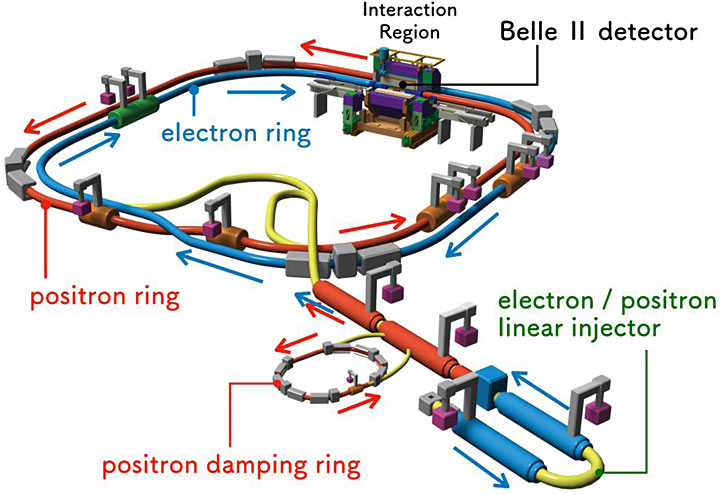 The Belle II detector at SuperKEKB was designed and built by an international collaboration of over 750 physicists from 25 countries. This collaboration is working closely with SuperKEKB accelerator experts to optimize the accelerator performance and backgrounds.

Background information on the science goals of the SuperKEKB/Belle II facility is available on the Belle II public webpage : https://belle2.jp/

Additional images are available at the KEK webpage : https://www.kek.jp/ja/imagearchive/superkekb-belle2/