Nanocubes with hollow interiors and surface openings whose shape, size, and location are precisely controlled could be used to load and unload materials for biomedical, catalysis, and optical sensing applications 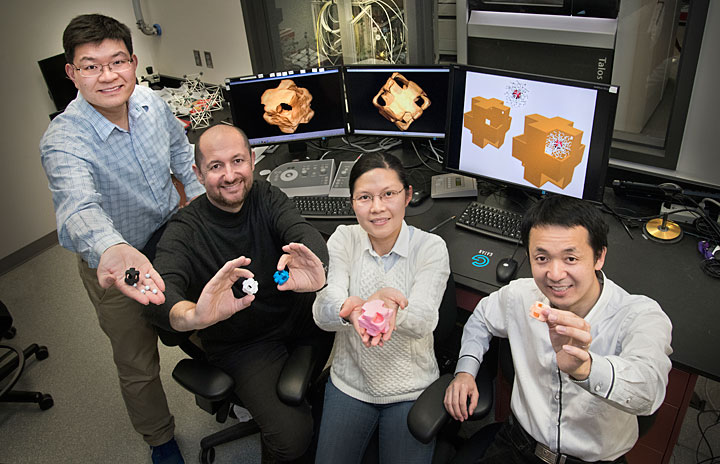 Yugang Zhang, Oleg Gang, Fang Lu, and Mingzhao Liu hold structural models of "nanowrappers" made of gold and silver and featuring holes in the corners. The scientists synthesized these hollow, porous nanostructures through a chemical reaction and characterized them using electron microscopy and optical spectroscopy capabilities at Brookhaven Lab's Center for Functional Nanomaterials.

UPTON, NY—This holiday season, scientists at the Center for Functional Nanomaterials (CFN)—a U.S. Department of Energy Office of Science User Facility at Brookhaven National Laboratory—have wrapped a box of a different kind. Using a one-step chemical synthesis method, they engineered hollow metallic nanosized boxes with cube-shaped pores at the corners and demonstrated how these “nanowrappers” can be used to carry and release DNA-coated nanoparticles in a controlled way. The research is reported in a paper published on Dec. 12 in ACS Central Science, a journal of the American Chemical Society (ACS).

“Imagine you have a box but you can only use the outside and not the inside,” said co-author Oleg Gang, leader of the CFN Soft and Bio Nanomaterials Group. “This is how we’ve been dealing with nanoparticles. Most nanoparticle assembly or synthesis methods produce solid nanostructures. We need methods to engineer the internal space of these structures.”

“Compared to their solid counterparts, hollow nanostructures have different optical and chemical properties that we would like to use for biomedical, sensing, and catalytic applications,” added corresponding author Fang Lu, a scientist in Gang’s group. “In addition, we can introduce surface openings in the hollow structures where materials such as drugs, biological molecules, and even nanoparticles can enter and exit, depending on the surrounding environment.”

Synthetic strategies have been developed to produce hollow nanostructures with surface pores, but typically the size, shape, and location of these pores cannot be well-controlled. The pores are randomly distributed across the surface, resulting in a Swiss-cheese-like structure. A high level of control over surface openings is needed in order to use nanostructures in practical applications—for example, to load and release nanocargo.

In this study, the scientists demonstrated a new pathway for chemically sculpturing gold-silver alloy nanowrappers with cube-shaped corner holes from solid nanocube particles. They used a chemical reaction known as nanoscale galvanic replacement. During this reaction, the atoms in a silver nanocube get replaced by gold ions in an aqueous solution at room temperature. The scientists added a molecule (surfactant, or surface-capping agent) to the solution to direct the leaching of silver and the deposition of gold on specific crystalline facets.

“The atoms on the faces of the cube are arranged differently from those in the corners, and thus different atomic planes are exposed, so the galvanic reaction may not proceed the same way in both areas,” explained Lu. “The surfactant we chose binds to the silver surface just enough—not too strongly or weakly—so that gold and silver can interact. Additionally, the absorption of surfactant is relatively weak on the silver cube’s corners, so the reaction is most active here. The silver gets “eaten” away from its edges, resulting in the formation of corner holes, while gold gets deposited on the rest of the surface to create a gold and silver shell.” 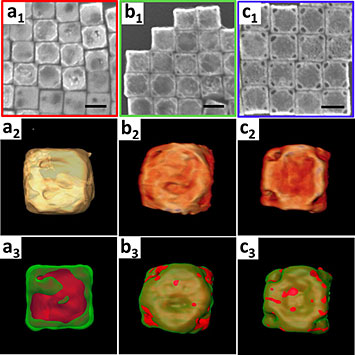 The 3-D structure and chemical composition characterizations of the products obtained after five minutes (a), 20 minutes (b), and one hour (c). The scanning electron microscope images (subscript 1, scale bars are 100 nanometers), reconstructed 3-D volume renderings (subscript 2), and 3-D elemental mappings (subscript 3, gold in green and silver in red) show the transformation of the silver nanocubes into gold-silver nanowrappers.

To capture the structural and chemical composition changes of the overall structure at the nanoscale in 3-D and at the atomic level in 2-D as the reaction proceeded over three hours, the scientists used electron microscopes at the CFN. The 2-D electron microscope images with energy-dispersive X-ray spectroscopy (EDX) elemental mapping confirmed that the cubes are hollow and composed of a gold-silver alloy. The 3-D images they obtained through electron tomography revealed that these hollow cubes feature large cube-shaped holes at the corners.

“In electron tomography, 2-D images collected at different angles are combined to reconstruct an image of an object in 3-D,” said Gang. “The technique is similar to a CT [computerized tomography] scan used to image internal body structures, but it is carried out on a much smaller size scale and uses electrons instead of x-rays.”

The scientists also confirmed the transformation of nanocubes to nanowrappers through spectroscopy experiments capturing optical changes. The spectra showed that the optical absorption of the nanowrappers can be tuned depending on the reaction time.  At their final state, the nanowrappers absorb infrared light.

“The absorption spectrum showed a peak at 1250 nanometers, one of the longest wavelengths reported for nanoscale gold or silver,” said Gang. “Typically, gold and silver nanostructures absorb visible light. However, for various applications, we would like those particles to absorb infrared light—for example, in biomedical applications such as phototherapy.”

Using the synthesized nanowrappers, the scientists then demonstrated how spherical gold nanoparticles of an appropriate size that are capped with DNA could be loaded into and released from the corner openings by changing the concentration of salt in the solution. DNA is negatively charged (owing to the oxygen atoms in its phosphate backbone) and changes its configuration in response to increasing or decreasing concentrations of a positively charged ion such as salt. In high salt concentrations, DNA chains contract because their repulsion is reduced by the salt ions. In low salt concentrations, DNA chains stretch because their repulsive forces push them apart.

Schematic for using the nanowrapper as a carrier to load and release a DNA-capped spherical nanoparticle. The blue and red on the direction arrow bars refer to low and high salt concentrations, respectively.

“Our electron microscopy and optical spectroscopy studies confirmed that the nanowrappers can be used to load and release nanoscale components,” said Lu. “In principle, they could be used to release optically or chemically active nanoparticles in particular environments, potentially by changing other parameters such as pH or temperature.”

Going forward, the scientists are interested in assembling the nanowrappers into larger-scale architectures, extending their method to other bimetallic systems, and comparing the internal and external catalytic activity of the nanowrappers.

“We did not expect to see such regular, well-defined holes,” said Gang. “Usually, this level of control is quite difficult to achieve for nanoscale objects. Thus, our discovery of this new pathway of nanoscale structure formation is very exciting. The ability to engineer nano-objects with a high level of control is important not only to understanding why certain processes are happening but also to constructing targeted nanostructures for various applications, from nanomedicine and optics to smart materials and catalysis. Our new synthesis method opens up unique opportunities in these areas.”

“This work was made possible by the world-class expertise in nanomaterial synthesis and capabilities that exist at the CFN,” said CFN Director Charles Black. “In particular, the CFN has a leading program in the synthesis of new materials by assembly of nanoscale components, and state-of-the-art electron microscopy and optical spectroscopy capabilities for studying the 3-D structure of these materials and their interaction with light. All of these characterization capabilities are available to the nanoscience research community through the CFN user program. We look forward to seeing the advances in nano-assembly that emerge as scientists across academia, industry, and government make use of the capabilities in their research.”