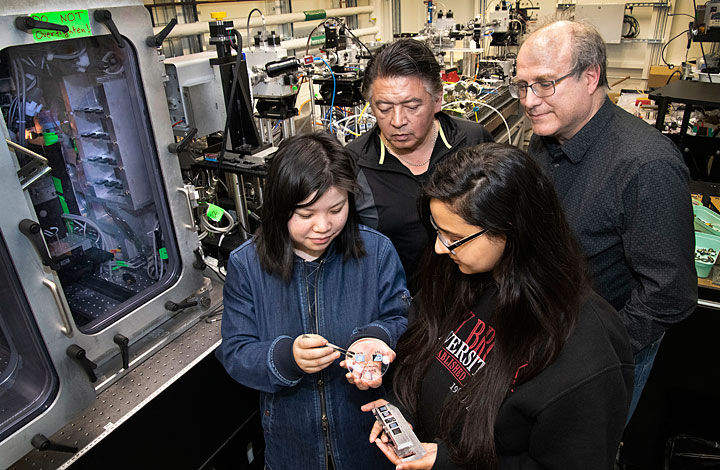 Qinyi Fu, Francisco J. Medellin-Rodriguez, Nisha Verma, and Benjamin Ocko (from left to right) prepare to mount the membrane samples that mimic the membranes used in reverse osmosis for the measurements in the Complex Materials Scattering (CMS) beamline at the National Synchrotron Light Source II (NSLS-II).

UPTON, NY—For the first time, a team of researchers from Stony Brook University and the U.S. Department of Energy’s (DOE) Brookhaven National Laboratory have revealed the molecular structure of membranes used in reverse osmosis. The research is reported in a recently published paper in ACS Macro Letters, a journal of the American Chemical Society (ACS).

Reverse osmosis is the leading method of converting brackish water or seawater into potable or drinking water, and it is used to make about 25,000 million gallons of fresh water a day globally according to the International Water Association.

“Most of the earth’s water is in the oceans and only three percent is fresh water, so water purification is an essential tool to satisfy the increasing demand for drinking water,” said Brookhaven Lab senior scientist Benjamin Ocko. “Reverse osmosis is not a new technology; however, the molecular structure of many of the very thin polymer films that serve as the barrier layer in reverse osmosis membranes, despite its importance, was not previously known.” 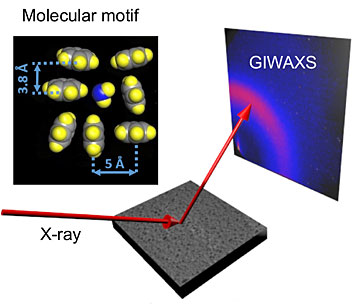 The sketch shows how the x-rays hit the membrane at a slight angle and scatter off the surface. They are then captured by a detector that records the so-called scattering pattern of the x-rays that is specific to the membrane's molecular structure. The top left panel shows two different molecular structures, which are also called molecular packing motifs. The results of the measurements suggest that the perpendicular motif (lower right) could be correlated with superior filtration properties.

The thin polymer barrier layer used in reverse osmosis membrane is semipermeable. Small molecules such as water can cross from one side of the membrane to the other, but other molecules, such as hydrated sodium or chloride ions, cannot cross the barrier layer. This characteristic is what allows these membranes to filter the salt out of saline in order to make drinking water. During a commercial reverse osmosis process, the salty water is pressurized to force the fresh water through the membrane.

Since the seawater has to be pressed through the membrane, the energy consumption of reverse osmosis facilities is high. To make 100 gallons of fresh water with reverse osmosis, the energy cost is about one kilowatt-hour, the equivalent of running a 100-watt light bulb for 10 hours.

“Even small improvements in the performance of filtration membranes would result in huge energy and cost savings globally,” said Benjamin S. Hsiao, distinguished professor at Stony Brook University. “Therefore, we are looking at the membranes on a molecular level. We want to figure out how molecular structure contributes to highly efficient membranes and use this knowledge to design improved membranes.” 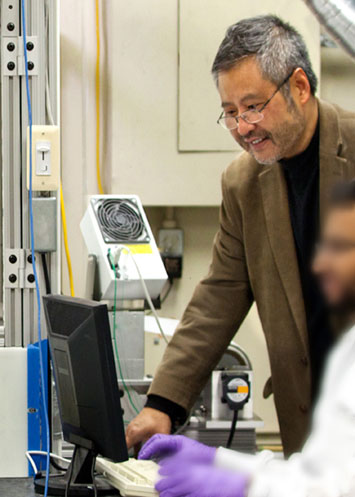 For these measurements, the team made a well-defined thin polymer film at the oil/water interface using a method called interfacial polymerization, which is similar to the industrial process. Like a two-part epoxy, one of the molecular components is added to the water and the other is added to the oil.  At the interface, where the water and oil touch—like the interface between oil and vinegar in salad dressing—the two molecular components react with each other and create the very thin polymer film.

“The resulting thin film is only one thousandth of the thickness of a human hair. It is also structurally similar to the thin barrier layer in commercial reverse osmosis membranes, but it is much smoother,” said Francisco Medellin-Rodriguez, a professor at San Luis Potosi Autonomous University in Mexico. “To study these thin films, we need ultrabright x-rays, as well as advanced analytical and simulation tools.”

By using ultrabright x-rays from the National Synchrotron Light Source II (NSLS-II), a DOE Office of Science User Facility at Brookhaven, the researchers are starting to unravel the relationship between the molecular structure of the membranes and their effectiveness.

According to Qinyi Fu, a Stony Brook University graduate student and the lead author of the study, “To resolve the molecular structure of the membranes, the team studied the scattering patterns of x-rays using a technique called grazing-incidence wide-angle x-ray scattering at NSLS-II’s Complex Materials Scattering (CMS) and Soft Matter Interfaces (SMI) beamlines.”

In this technique, the x-rays hit the membrane at a slight angle and scatter off the surface. They are then captured by a detector that records the so-called scattering pattern of the x-rays that is specific to the membrane’s molecular structure.

Hsiao added, “Our findings also show that the molecular structure is preferentially oriented with respect to the membrane surface. This is rather intriguing and may be related to how the water pathways in the membrane are oriented.”

More recently, the team has started to study reverse osmosis membranes that are manufactured for commercial water purification systems. The chemicals used to prepare these membranes are the same as those that were used to make membrane films at the oil/water interfaces.

“The commercial processes are protected by corporate trade secrets and the precise manufacturing conditions are not known,” Ocko said. “Despite this, our findings show that commercial membranes exhibit similar structural properties as the model membranes prepared in our lab at the oil/water interface, including the parallel and perpendicular motifs and preferential molecular orientation.”

By studying many membrane materials and comparing their x-ray determined structural properties with their filtration characteristics, the scientists expect to develop a detailed structure-function relationship.

“We hope that this will help the development of more energy efficient membranes for future generations of water filtration systems,” Hsiao said.

The Stony Brook team was supported by the Polymers Program, Division of Materials Research of the National Science Foundation (DMR-1808690).