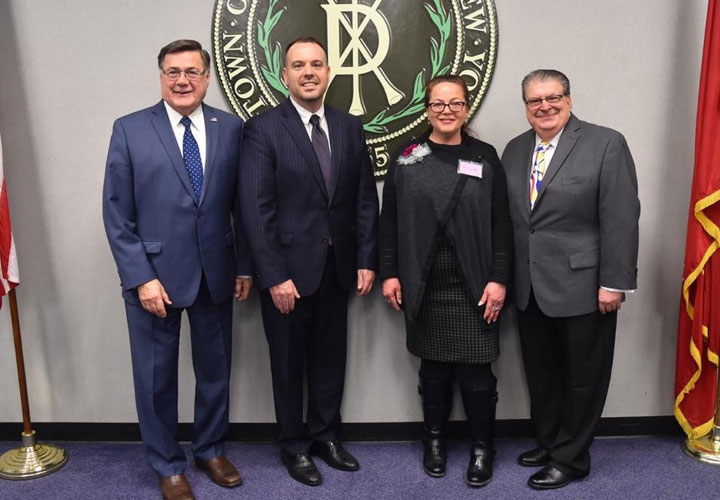 With Cathy Cutler, recipient of the 2019 Town of Brookhaven (TOB) Women in Science Award are, from left, Edward Romaine, TOB Supervisor; Dan Panico, Councilman (District 6); and Louis Marcoccia, TOB Receiver of Taxes. Cutler received the award for her scientific accomplishments in the field of radioisotopes. She was honored at a ceremony held at Brookhaven Town Hall on March 21.

Cathy Cutler, Director of the Medical Isotope Research & Production program at the U.S. Department of Energy’s (DOE) Brookhaven National Laboratory, was honored for her scientific accomplishments at Brookhaven Town’s 33rd Annual Women’s Recognition Night, held on Mar. 21 at Town Hall in Farmingville. She was among 13 women honored for their contributions to a variety of fields at a public ceremony that celebrates the significant achievements of local women during Women’s History Month.

At Brookhaven Lab, Cutler and her team collaborate on research with radiopharmaceuticals for cancer therapy, and they make radioisotopes required for this research as well. These radioisotopes would otherwise not be available but are, thanks to the high-energy Brookhaven Linac Isotope Producer (BLIP) that is part of the extensive particle accelerator infrastructure for the Relativistic Heavy Ion Collider—a U.S. Department of Energy Office of Science User Facility for fundamental nuclear physics research located at Brookhaven.

Radiopharmaceuticals are vital for "noninvasive," personalized cancer treatments that provide patients with high-impact doses to combat tumors without damaging nearby healthy cells. With more than 20 years' experience developing and evaluating radiopharmaceuticals, Cutler is helping lead their development for "theranostics" that combine medical therapies with diagnostic medical tests.

“I am honored to receive this award from the Town of Brookhaven,” said Cutler, who acknowledged the contributions of her colleagues in the success of her research and the isotope program at Brookhaven Lab. “Brookhaven Lab is one of just a few facilities in the DOE complex that can produce certain critical medical isotopes. We are hopeful that this research will lead to improved treatment options for cancer patients.”

“The Town of Brookhaven is pleased to recognize Cathy Cutler for her achievements as an outstanding scientist, leader, and role model for those aspiring to careers in science, technology, and engineering,” said Brookhaven Town Supervisor, Edward Romaine.

Cutler joined Brookhaven Lab in 2015 after earning a Ph.D. in inorganic chemistry from the University of Cincinnati and spending nearly 17 years at the University of Missouri Research Reactor Center. She serves as a mentor to young scientists, has received numerous awards, and holds several patents. In addition to her role at the Lab, Cutler has served as chair of the Society of Nuclear Medicine and Molecular Imaging's committee on radiopharmaceuticals. She is a board member for the society's Therapy Center of Excellence and Center for Molecular Imaging Innovation and Translation and an executive board member for the Society of Radiopharmaceutical Sciences.