Plant Cells Eat Their Own … Membranes and Oil Droplets 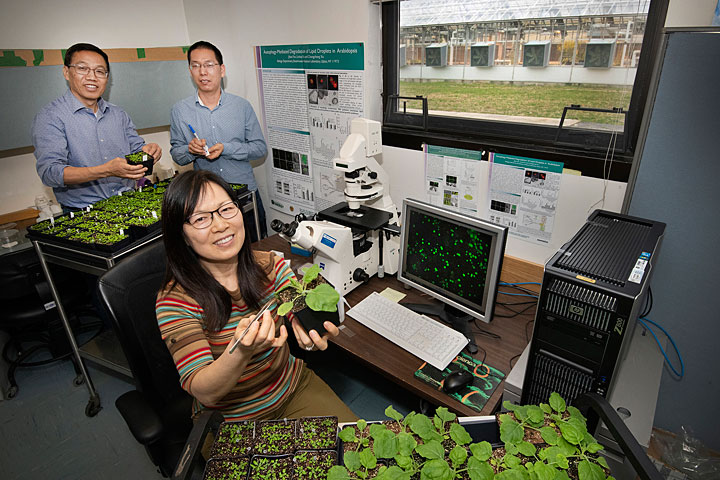 Changcheng Xu (rear, left), Linhui Yu, and Jilian Fan (seated) with Arabidopsis plants they used to study the role of autophagy, or "self-eating," in oil biosynthesis and the breakdown of lipid droplets at Brookhaven National Laboratory.

UPTON, NY—Biochemists at the U.S. Department of Energy’s Brookhaven National Laboratory have discovered two ways that autophagy, or self-eating, controls the levels of oils in plant cells. The study, published in The Plant Cell on April 29, 2019, describes how this cannibalistic-sounding process actually helps plants survive. It also provides mechanistic details scientists might leverage to get plants to accumulate more oil.

Plants usually store oil in their seeds, hence, in limited quantities. Having more oil stored in vegetative tissues—leaves, stems, and roots—would make plants more useful as energy crops, explained Changcheng Xu, the Brookhaven biochemist who led the study. Abundant plant oil could be extracted and used as biodiesel fuel to run cars, for example. Or the oil-rich biomass—packing more energy than typical plant matter made of carbohydrates—could be burned to generate electricity, heat buildings, and for other energy applications.

“If you want to increase oil accumulation, you need to know how oil is synthesized and understand the stability of the oil in plant tissues,” Xu said. “Our study shows that autophagy plays two major roles in oil balance: First, it’s important for the biosynthesis of lipid droplets, the form in which oil is stored in vegetative and other tissues. It also plays a role in breaking down those droplets when plants need to use the oil to produce energy.”

Eating a part of oneself may sound like an odd strategy for survival. But consider that this process is universal. It occurs during normal growth in mammalian cells, yeast, and plants, and has been shown to be massively inducible by stressful events such as starvation.

“But rather than total consumption of an arm or leg, branch or stem, autophagy is more of a cellular-scale form of recycling,” Xu said.

“All cells need a way to get rid of unwanted materials,” he explained. These could include invading pathogens, toxic waste products, or even old and damaged “organelles,” those mini organs such as mitochondria and chloroplasts that do the basic jobs of living cells. Cells typically deliver their refuse to self-contained recycling compartments: “vacuoles” in yeast and plant cells, or “lysosomes” in mammals. Inside, powerful enzymes that would be too damaging to have floating around freely in the cell break down the wastes to release biochemical building blocks that can be reused to make new cellular structures or to provide energy for the cell.

Xu’s study revealed that some of the biochemical building blocks set free by this normal autophagic recycling process are the fatty acids that make up oil droplets.

The Brookhaven team used plants they had already modified to store oil in lipid droplets in their leaves. To track where the oil came from, they fed cells from these plants fatty acid precursors that were labeled with a radioactive form of carbon. This radioactive “tag” allowed them to track where the labeled molecules went over time.

These images, taken using a confocal microscope at Brookhaven Lab's Center for Functional Nanomaterials, show lipid droplets (green) enclosed within plant cell vacuoles (red-labeled membranes). The plants had been in the dark and were in the process of "eating" their own lipid droplets to provide the cells with energy in the absence of sunlight/photosynthesis.

They found that the labeled fatty acids were not directly incorporated into lipid droplets. Instead they first became part of the cells’ various membranes.

“Lipids are a major component of cellular membranes, including the membranes that surround every organelle,” Xu said. “Our study shows that autophagy delivers the old organelles with their lipid-rich membranes to the vacuole to be degraded, and then the labeled fatty acids released from the membranes end up in the oil stored in lipid droplets.”

Another step in these biochemical-genetics studies confirmed that eating the old membranes was important to building up the stored oil: Turning off the genes required for autophagy reduced the accumulation of lipid droplets by 70 percent.

Solution to plants’ and maybe our energy needs

Once they knew autophagy played an important role in oil biosynthesis, the scientists also wanted to explore whether they could induce the kind of autophagy that yeast and mammalian cells use to eat lipid droplets when they are starving. To starve their plants, the scientists placed them in the dark. Without sunlight, there’s no photosynthesis to provide energy. 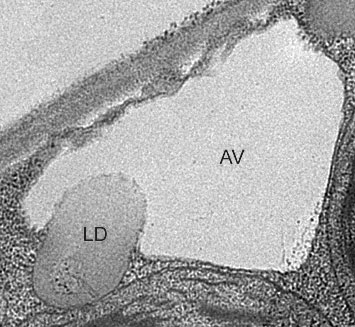 An electron micrograph showing a plant cell vacuole (AV) engulfing a lipid droplet (LD) under starvation conditions the scientists had created by placing the plants in the dark.

For this part of the study, the scientists used two fluorescent markers to label the lipid droplets (green) and the membrane surrounding the vacuole (red). They tracked what happened using a confocal microscope at Brookhaven Lab’s Center for Functional Nanomaterials, a DOE Office of Science User Facility.

“These images clearly show the vacuoles engulfing entire lipid droplets,” Xu said. Inside the vacuole, enzymes would normally break down the lipid droplets to release fatty acids for energy, but the scientists blocked that degradation so they could capture the images before the droplets disappeared.

“We wanted to capture the swallowing, but not digestion,” Xu said.

Again, they tested what happened when they blocked the genes for autophagy.

“The vacuoles can’t eat the droplets, so they accumulate in the cytoplasm,” Xu said.

Leaving oil droplets undigested in the cytoplasm might be bad for plants starving in the darkness, but it could suggest a way to get bioenergy crops to accumulate more oil.

“There are a lot more details to discover about how this process happens,” Xu said. “But if we can discover the signals that are involved, we may be able to manipulate the process to get plants to make and store more fatty acids, the major components of biodiesel. This knowledge could also be used to make oil droplets more stable, or plants that are more resistant to stress. It’s a whole new exciting research field!”