Brookhaven researchers Jilian Fan, John Shanklin, and Changcheng Xu have developed a method for getting experimental plants to accumulate more leaf oil. Their strategy could have a significant impact on the production of biofuels.

UPTON, NY — Increasing the oil content of plant biomass could help fulfill the nation's increasing demand for renewable energy feedstocks. But many of the details of how plant leaves make and break down oils have remained a mystery. Now a series of detailed genetic studies conducted at the U.S. Department of Energy's (DOE) Brookhaven National Laboratory and published in The Plant Cell reveals previously unknown biochemical details about those metabolic pathways—including new ways to increase the accumulation of oil in leaves, an abundant source of biomass for fuel production.

"This is an unusually high level of oil accumulation for plant vegetative tissue," said Brookhaven Lab biochemist Changcheng Xu, who led the research team. "In crop plants, whose growth time is longer, if the rate of oil accumulation is the same we could get much higher oil content—possibly as high as 40 percent by weight," he said.

And when it comes to growing plants for biofuels, packing on the calories is the goal, because energy-dense oils give more "bang per bushel" than less-energy-dense leaf carbohydrates.

The key to increasing oil accumulation in these studies was to unravel the details of the biochemical pathways involved in the conversion of carbon into fatty acids, the storage of fatty acids as oil, and the breakdown of oil in leaves. Prior to this research, scientists did not know that these processes were so intimately related.

"Our method resulted in an unusually high level of oil accumulation in plant vegetative tissue."

To reveal the connections, Brookhaven's Jilian Fan and other team members used a series of genetic tricks to systematically disable an alphabet soup of enzymes—molecules that mediate a cell's chemical reactions—to see whether and how each had an effect in regulating the various biochemical conversions. They also used radiolabeled versions of fatty acids to trace their paths and learn how quickly they move through the pathway. They then used the findings to map out how the processes take place inside different subcellular structures, some of which you might recognize from high school science classes: the chloroplast, endoplasmic reticulum, storage droplets, and the peroxisome.

"Our goal was to test and understand all the components of the system to fully understand how fatty acids, which are produced in the chloroplasts, are broken down in the peroxisome," Xu said. 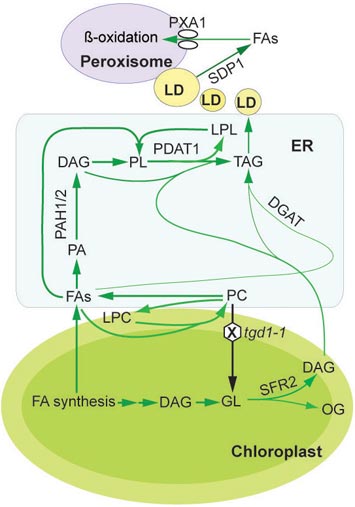 Details of the oil synthesis and breakdown pathways within plant leaf cells: Fatty acids (FA) synthesized within chloroplasts go through a series of reactions to be incorporated into lipids (TAG) within the endoplasmic reticulum (ER); lipid droplets (LD) store lipids such as oils until they are broken down to release fatty acids into the cytoplasm; the fatty acids are eventually transported into the peroxisome for oxidation. This detailed metabolic map pointed to a new way to dramatically increase the accumulation of oil in plant leaves — blocking the SDP1 enzyme that releases fatty acids from lipid droplets in plants with elevated fatty acid synthesis. If this strategy works in biofuel crops, it could dramatically increase the energy content of biomass used to make biofuels.

The research revealed that there is no direct pathway for fatty acids to move from the chloroplasts to the peroxisome as had previously been assumed. Instead, many complex reactions occur within the endoplasmic reticulum to first convert the fatty acids through a series of intermediates into plant oils. These oils accumulate in storage droplets within the cytoplasm until another enzyme breaks them down to release the fatty acid building blocks. Yet another enzyme must transport the fatty acids into the peroxisome for the final stages of degradation via oxidation. The amount of oil that accumulates at any one time represents a balance between the pathways of synthesis and degradation.

That idea works to some extent, Xu said, but the current research shows it has negative effects on the overall health of the plants. "Plants don't grow as well and there can be other defects," he said.

Based on their new understanding of the detailed biochemical steps that lead to oil breakdown, Xu and his collaborators explored another approach—namely disabling the enzyme one step back in the metabolic process, the one that breaks down oil droplets to release fatty acids.

"If we knock out this enzyme, known as SDP1, we get a large amount of oil accumulating in the leaves," he said, "and without substantial detrimental effects on plant growth."

"This research points to a new and different way to accumulate oil in leaves from that being tried in other labs," Xu said. "In addition, the strategy differs fundamentally from other strategies that are based on adding genes, whereas our strategy is based on disabling or inactivating genes through simple mutations. This work provides a very promising platform for engineering oil production in a non-genetically modified way."

"This work provides another example of how research into basic biochemical mechanisms can lead to knowledge that has great promise to help solve real world problems," concluded Shanklin.

This research was conducted by Xu in collaboration with Jilian Fan and Chengshi Yan and John Shanklin of Brookhaven's Biosciences Department, and Rebecca Roston, now at the University of Nebraska, Lincoln. The work was funded by the DOE Office of Science and made use of a confocal microscope at Brookhaven Lab's Center for Functional Nanomaterials, a DOE Office of Science user facility.